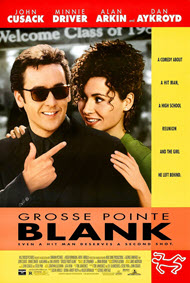 “A comedy about a hit man, a high school reunion and the girl he left behind.”

“Grosse Pointe Blank” is an enjoyable movie overall, even though it directly conflicts with Biblical morality as the main character (“Martin Blank,” played by John Cusack) is a paid assassin. Even though Martin the hit-man realizes he needs a change in his life, his past makes it almost impossible to do so.

In sum, the story reveals what happens when Martin decides to attend his 10-year high school reunion …part of his quest to find meaning in his life. At the reunion he plans to reunite with Debi (Minnie Driver), the girl he stood up on prom night 10 years prior. Also, he has one last “job” to do in the same town.

Meanwhile, a “competitor” named Grocer (played by Dan Aykroyd) has turned Martin in to various government agencies and plans on having him killed because he won’t join a new conglomerate of assassins that Grocer is starting.

The comic aspects come into play as Martin sees old teachers and classmates and people ask about the 10-year void, “Where have you been for the past 10 years?” Surprisingly, Martin honestly responds with “joined the army for a few years and now I’m a professional killer.” Most assume he is joking and overlook his honest response. Martin is not as overt in his response to Debi’s questions, though, leaving her quite shocked when she catches him in an act of his profession.

The ads for this movie declare “EVEN A HIT MAN DESERVES A SECOND SHOT.” This, perhaps, is the only possible Christian perspective. Jesus’ sacrifice and the redemption He made available allows anyone a second chance—even a thief or a killer can be cleansed—reminding us of the wonderful grace that we have received. Too bad Martin does not turn to God, though. Instead he turns to a therapist (played by Alan Arkin) and finds a strained relationship there, to boot.

For Christians easily offended [those who believe that Ephesians 5:3-14 appies to such things as watching a movie], you should probably skip this one. There is plenty of violence served up as assassinations and attempted assassinations are carried out. Further, implied sexual activity and heavy innuendos are inappropriate for younger audiences. Bad language (profanity, etc.) and drug use combined with the above netted this movie the “R” rating.

…This film was not to be taken so seriously… The film was made in good fun… “Blank” is a no-lose fun, upbeat, feelgood film to enjoy, for anyone.

Todd Furman
This movie left me sad as I watched the credits roll. It was a sad statement of the morals of our time. That folks would sit and watch a man kill and collect money, and folks would see this as funny. Yes, it is listed as a comedy. But it is a sad statement of life and entertainmetn in 1997. There are so many more stories of victory over lifestyles and problems that face folks today.

Cheryl Deitrich, age 45
In response to Cheryl’s point, I think there is a tendency, espically among us Christians, to take things too seriously. Yes, there are plenty of films with uplifting themes, but, come on, this is just entertainment. I would have no problem taking Jesus to this movie.