for violence, some bloody images and brief strong language. 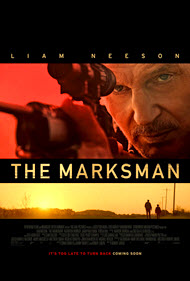 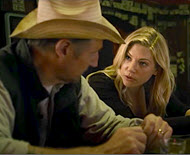 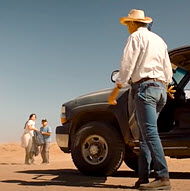 Defending those in desperate need 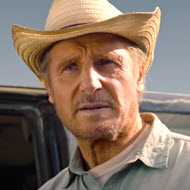 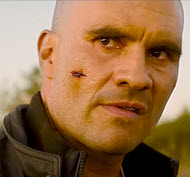 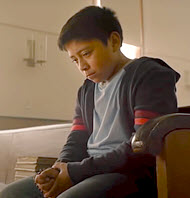 Wife who dies of cancer / Where did CANCER come from? Answer

Jim Hanson (Liam Neeson) hasn’t been the same since his wife passed away. He’s been in bit of a rut, both financially and motivationally as well. He is on the verge of losing his Texas ranch adjacent to the Mexican border that he and his wife shared for many years, and finding work for an aged, retired U.S. Marine has been difficult for Jim (though he gets by with some odd jobs here and there).

One day while driving his truck along the U.S./Mexico border, he spots a young woman and her son trying to flee Mexico through the fence. They seem to be in a hurry, with cuts on the faces and desperately out of breath. Jim offers to provide them assistance when suddenly some Mexican cartel members approach the fence. They tell Jim to give them the woman and the boy.

Jim refuses and a gun fight ensues. Unfortunately, in the ensuing battle, the mother, Rosa (Teresa Ruiz), is mortally wounded and asks Jim, with her last dying breath, to take her son, Miguel, to his family that lives in Chicago where he will be safe from the Cartel. Jim is slightly hesitant at first, but in time, comes to believe that he is the best person to take Miguel his family.

“The Marksman” is a story of two people from different parts of the world that must come together to beat the odds if they are to get Miguel safely to Chicago before the Cartel catches up to them.

Having seen Liam Neeson in numerous films over the years in a variety of different role categories, I believe Mr. Neeson needs to take a step back and reevaluate some of the movies he agrees to film. “The Marksman” is one of them. I respect Mr. Neeson. He’s a very fine, accomplished actor. But the character he portrays in “The Marksman” is too one-dimensional, as are the Cartel members he encounters. Even the supporting characters, like his stepdaughter/Border Patrol Agent, really didn’t have much purpose or had very little screen time, with the exception of the young boy Jacob Perez who plays Miguel (his performance was strong).

I could forgive the lack of character development, to a certain extent. What troubles me is the lack of identity the film has. It’s not an action film (there’s VERY little action for an action film, apart for some in the middle and a moderate amount in the end). It’s not a thriller, and it doesn’t fill in enough of the blanks to qualify as a drama. So I was scratching my head at the end asking, “What in the world is it?” A film without a firm identity is like a book without words in it… empty. To the film’s credit, the plot is fairly straightforward, but then again, afterwards I was writing down on my clipboard: “too many unanswered questions.”

Violence: A man is seen slightly bloodied and hanging in chains from an overpass (not dead, but being asked for information by the cartel). Rosa is scraped in the face by the Border fence as she tries to duck underneath. Rosa is shot in the abdomen. A cartel boss threatens a cashier by choking her (we hear a gunshot later in the shop with the assumption the cashier was killed). A fake county sheriff pulls a gun on a character and is knocked out. Another character is shot off screen. A dog is killed on screen, and we see a character carry the corpse into a truck. A car flips over and people are killed, and others injured with blood on their faces. People are shot in the head. A man is severely wounded in the abdomen. A man is, lastly, given the choice to commit suicide or bleed out, and we hear him shoot himself off-screen.

Drugs/Alcohol: Jim is seen drinking alcohol quite a few times, particularly at home and at bars (we even see him pass out), but eventually he decides to be sober.

Other: We see a coyote eating a dead animal and then see a character kill the coyote. Jim illegally breaks Miguel out of Border Patrol custody to protect him from the cartel who are waiting outside.

Spiritual Issues: Sadly, Jim states to Miguel, in anger at one point, “There is no such thing as Heaven. Heaven is just cr*p people say to make you feel better.” Out of guilt, Jim later takes Miguel to church to allow him to pray for his mother, even though Jim doesn’t believe.

What is GOD’S PROVIDENCE? Answer

What is the SOVEREIGNTY OF GOD? Answer

What is “THE FEAR OF THE LORD”? and Why is it important? Answer

What is HUMILITY? and WHY is it important to be humble? Answer

What is the “FURY” of God? Answer

What are Judgments of God? Answer

Both Miguel and Jim find friendship in each other because each has gone through terrible trials. Miguel lost his mother at such a young age, and Jim lost his wife of many years. True, it’s good to find comfort in each other when we grieve. I, myself, have lost a few loved ones and have relied on my family for comfort. My primary source for healing, though, is the Lord. The Lord is the ONLY one who can provide the means and the strength to get through your greatest grief. It may take time, it may take patience (a LOT of patience), but the Lord does not leave, and he does not forget.

“The LORD is close to the brokenhearted and saves those who are crushed in spirit.” —Psalm 34:18

“Come to me, all you who are weary and burdened, and I will give you rest. Take my yoke upon you and learn from me, for I am gentle and humble in heart, and you will find rest for your souls.” —Matthew 11:28-29

“My flesh and my heart may fail, but God is the strength of my heart and my portion.” forever.” —Psalm 73:26

And I look forward to the day when there is no more grief, when we will longer be in any physical, emotional or other form of pain. What a glorious day that will truly be! As Jesus once said:

“So with you: Now is your time of grief, but I will see you again and you will rejoice, and no one will take away your joy.” —John 16:22

And as John wrote of our Savior’s return in Revelation:

“‘He will wipe every tear from their eyes. There will be no more death, or mourning or crying or pain, for the old order of things has passed away.” —Revelation 21:4

When I stepped into the theater, I approached the box office and greeted the attendant and when she heard I was going to see “The Marksman” she remarked, “Wow, very cool. I heard it’s very violent from the trailers.” Well, looking back, as far as action films go, yes the film has SOME action, sure, but not as much as a majority do these days, so I cannot place it in that category, but what action that is present will be concerning to some parents, so caution is advised about this as well as the use of vulgar language and alcohol. There is also the fact that, honestly, the characters are just one-dimensional, and frankly, I think Liam Neeson deserved better. He’s a more accomplished actor. Perhaps over the past 13 years I’ve become too critical and perhaps that’s what I’ve been with “The Marksman.” I’ll let you be the judge though.

Secular Movie Critics
…A thriller that misses the mark, and not by a little…
Roger Moore, Movie Nation
“The Marksman” isn't good, but Liam Neeson makes it better than it has any right to be… Part of that has to do with the way Lorenz stages the action—well-choreographed and tense. Part of it has to do with Perez, who combines being adorable with a kind of hard-won wisdom beyond his years that makes for a completely winning character. …
Bill Goodykoontz, The Arizona Republic
…Although Neeson has a nice rapport with young costar Jacob Perez, there’s no escaping the formulaic storyline featuring uncomplicated good guys and abundantly villainous bad guys. …
Tim Grierson, Screen Daily
…watchable-product-that’s-not-as-good-as-he-is… a feel-good action road movie… stages the action with a convincing ebb and flow, but thanks to an undercooked script what happens in between is mostly boilerplate…
Owen Gleiberman, Variety
…really more old-fashioned western than anything else—and a familiar one at that. …misses its target… The tension-free narrative moves slowly and stumbles over head-slapping moments…
Michael Ordona, Los Angeles Times
…A solid entry in the Neeson action oeuvre… Neeson delivers an Eastwood-style performance while also revealing an emotional vulnerability that proves fully relatable. It's easy to see how his distinctive combination of mature rugged masculinity and Irish soulfulness has made him a perfect action hero for these complicated times. …
Frank Scheck, The Hollywood Reporter
…If it lacks some of the panache and grindhouse appeal of previous installments, it also avoids the xenophobia and general mean-spiritedness. …
Vince Mancini, Uproxx
…aims for the heart… It is the kind of film you watch on accident more than seek out, but you probably won’t regret the accident. …
Evan Saathoff, Slashfilm
…This is a more hardscrabble, beaten down version of Neeson’s iconic revengers than most of his action roles, with Hanson coming across as sympathetically appealing despite the cliched storyline. …
Marc Savlov, The Austin Chronicle