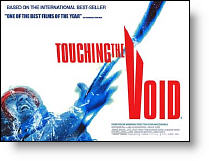 A skeptic says: “I am perfectly content as a non-Christian. I do not believe in an afterlife and would never consider a religion so restrictive and exclusive as Christianity anyway.” Response

Why should any one have to accept ancient hearsay as evidence for the existence of a god? Answer

Mountaineer Simon Yates, having just fallen 150 feet from the face of a remote Andean peak, finds himself miraculously alive on a precarious ledge deep within a gloomy glacial crevasse, his leg broken in several places. In the face of certain death, he questions his belief in God.

He takes little time to declare his answer. No desperate prayers, no Hail Marys, no sense that a judgment or an afterlife is at hand. Yates states his climbing catastrophe has done one thing, at least: settled in his own mind the question of whether or not he believed in God. Yates answer was clear: he did not.

This one person discussion comes at the midpoint of a gripping documentary-drama hybrid by British filmmaker Kevin McDonald entitled “Touching The Void.” As a Christian, I thought briefly of Jesus’ comments about those who are lukewarm. Yates is not. He is cold—spiritually and literally.

The not-to-miss film is the true story of one of the more remarkable acts of human survival in the face of Nature since Shackleton’s rescue odyssey.

There are many discussion points for a Christian viewer in this movie. First off the plate is the pairs’ deep need to face extreme personal risk on mountains across the planet. This explains why the pair challenged Siula Grande “alpine style” which means just the two of them roped together with no base camps—or hope for rescue should something go wrong.

After a harrowing climb, with excellent explanations of mountaineering techniques and strategies, the two begin their descent. They are out of fuel, which means they cannot melt snow and thus face dehydration—along with hypothermia. As they descend, Yates slips and breaks his leg in two places.

It is a virtual death sentence, but the climber bravely works a strategy of lowering his partner rope length by rope length. The film’s dramatic apex comes when Yates is forced to cut his partner loose—and send him to certain death. As the film progresses, Yate’s sense of guilt and self-questioning are well explored.

“Touching The Void” systematically shows Yates as he crafts a strategy to survive—one which is ultimately successful.

There is no sex in the film, and the violence is limited to strictly realistic depictions of a climber breaking his leg and falling. There is some rough talk, but minor compared with typical Hollywood films.

This is not a Christian film in any sense. But Simpson’s unbelief, Yate’s exploration of his own guilt, and the general theme of a need to face unnecessary risk provide rich platforms for discussion. In many ways, the film’s juxtaposition of small, insignificant humans with the incredible grandeur of God’s creation is an unmistakable, if unintended, allegory.

“Touching The Void” is a fantastic movie.

OK for teens, offers good talking points for parents. Probably would lose younger viewers. It’s not a kids’ movie in any way.

Positive—This isn’t really a review as much as an observation. In your review you say that the story is about Simon Yates breaking his leg, I just wanted to point out that it is in fact Joe Simpson who falls and breaks his leg, not Simon Yates.
My Ratings: Moral rating: Better than Average / Moviemaking quality: 5