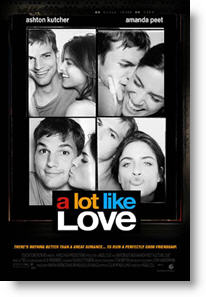 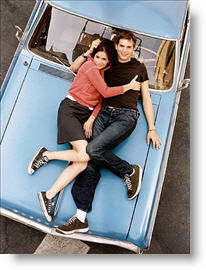 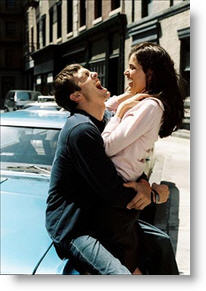 “There’s nothing better than a great romance… to ruin a perfectly good friendship.”

The movie begins seven years in the past, when Oliver (Austin Kutcher—“Just Married”) meets Emily (Amanda Peet—“The Whole 9 Yards”) at an airport. Emily is breaking up with her rockers boyfriend, and Oliver is off to visit his brother in New York City. As it turns out they are both on the same plane. Emily sees Oliver and seems to find him attractive. While on the plane she “visits” him in the bathroom. Oliver is quite surprised by this forward move and seeks to continue the “relationship” even though we think Emily only wanted a one night stand to get past her breakup. She attempts to get Oliver to move on. He is persistent and they end up spending some time together in New York. Eventually, Oliver tells Emily that he will have his “ducks in line” within six years. He gives her his parent’s number and tells her to call in six years to prove it. They bet $50 on it.

Kutcher plays his character with a bit of “ah shucks” casualness, almost to the point of him being boring. I think the pacing of the film has something to do with that however, as it often seems slow, with scenes running longer than you expect. Peet, as always in my opinion, is watchable. Her eyes and facial expressions are always interesting. We see glimpses of her character’s back story, but there is still some superficiality there.

The story jumps ahead three years. Oliver and Emily hook up again. Then two more years pass and they find each other again. Oliver is on the verge of making it big with a internet diaper company. He and his partner Jeeter (Kal Penn—“Harold and Kumar Go to White Castle”) are in San Francisco to pitch their idea to some venture capitalists. Penn is quite funny in this limited role.

The movie continues to move forward and time and uses a few somewhat familiar plot devices to bring us closer to the present and reveal the ending.

The music in the movie is great. There are lots of good songs throughout that have you singing along or tapping your feet. They assist the pacing a little, but don’t salvage it completely.

There is light cursing in the movie, a half a dozen or so mild profanities, but the Lord’s name is not taken in vain. Several sex scenes are implied or partially shown between Peet and Kutcher, and there is brief “sidal” nudity (as George Costanza would say). This is a movie aimed at twenty-somethings and perhaps thirty-somethings, but I wouldn’t recommend it for teenagers.

I don’t think having sex with someone you haven’t really even met yet is a lot like love. Perhaps staying connected to someone and always finding your way back to them is though. I think a lot of people will relate to the coming of age part of the story, and on that level it works. Don’t expect many out loud laughs, there are only a few. It’s a cute movie, but not much more than that.

Positive—My husband and I saw this movie, and I really liked it. …The plot of this film is dependent upon sex prior to marriage. The movie though, has moments of surprising depth—moments where the characters make a choice or say something, and you might be sitting in the audience thinking “wow… how profound.” we had several instances like that, which for us made the movie feel “real.” for a comedy romance, “a lot like love” is more then sweet, its poignant, thought provoking, a great thing to talk about with your date and above all it was very funny! language was light, aside from the reoccurring implications of pre-marital sex, and some drinking this movie is not offensive at all and very worth seeing.
My Ratings: Average/4

Misty Wagner, age 29
Neutral—I have to say that I own this film, and I love it. …I completely believe in guarding your heart and remaining pure, however, especially when you are directly in the ministry as myself, you can’t be blind and hide from reality. The world is obviously in a religious battle, and I have to say that I’m fighting on God’s side. Yes, this movie has flaws morally, however it’s a form of art and expression, you don’t have to agree with everything in it…
My Ratings: Average / 3

Preacher’s wife, age 22
Negative—…It sounded like a fun romantic comedy. It is full of sexual content from beginning to end and has nudity of the entire backs and sides of male and female. One of the comments I read was a positive one saying the movie didn’t condone sex outside of marriage. I don’t know how they got that out of this movie, because that’s what it is about. Yes, the girl matures along the way, and her values change, but she’s still willing to be promiscuous. I do not recommend this movie… I should have walked out, but kept thinking it would get better. It never did for me.
My Ratings: Extremely Offensive/3

Lynn, age 49
Comments from young people
Neutral—…I was disappointed in how the movie condoned casual sex over the years, and how it seemingly kept the characters “in love.” However, aside from the sexual content in this movie, it was a better than average chick flick plot, and very cute (in humor) in some parts. Is the cute plot worth putting up with some sexual content? Probably not.
My Ratings: Average/4

Christine, age 16
Neutral—This film is boring and doesn’t have a very good plot. Some positive things I saw were how the characters cared for each other over a period of time. I don’t recommend this movie for young kids.
My Ratings: Average/2

Grace W., age 13
Positive—…there were some very awkward scenes of sex. It really taught me that if you participate in sex before marriage, it can scare you emotionally. Lucky for them, they ended up getting married, but reality doesn’t always have a happy ending.
My Ratings: Average/4