for violence, sensuality, and language including sexual references 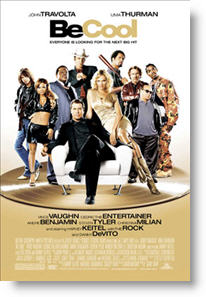 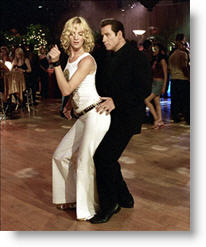 “Everyone is looking for the next big hit”

R-rated movies don’t make the kind of money they used to; “PG-13” movies are where the money is now—naturally because they are more accessible to a wider audience. Teens flock to the theater and, since they can’t always get into “R” rated movies, shell out there money for just about every “PG-13” movie playing. It seems that every film studio will bend over backwards now to keep their movie from getting the dreaded “R,” and will cut out as little as possible to ensure they get the “PG-13.”

In 1995, John Travolta starred in “Get Shorty,” a film about a Miami loanshark who flies to Los Angeles on business and winds up becoming a movie producer. The movie was smart, satirically funny, and very much an “R” rated film. That movie was, for the most part, seen entirely by adults; smart ones, who knew the look of a good movie when they saw it. What bothers me most about the sequel “Be Cool” is that the people involved in making this film seem to have thought more about how much money could be made than they did about how well the film could be made.

Kids who don’t have a clue what “Get Shorty” was about, or who probably have no idea there even is a “Get “Shorty” are going to go in hordes to this one. Why? Because, it has the Rock, Cedric the Entertainer, Vince Vaughn, and, oh yeah, it’s rated “PG-13.” By dumbing “Be Cool” down to the “PG-13” level, they have basically taken any life this sequel could have had, and well, beat it to death with a baseball bat.

“Be Cool” brings back Chili Palmer (John Travolta), the aforementioned loanshark-turned-movie-producer. He has now grown tired of the movie business. He is pitched an idea for a movie by a friend (a music producer) who wants a film made about his life. However, as in any film involving gangsters, someone must be offed at the start, and the music producer is the poor sap in this one.

Chili knows the producer’s wife Edie (Uma Thurman) and wants to help her run the record company. Shortly after, Chili visits a night club where he hears the angelic voice of Linda Moon (Christina Milian). He tells her he is thinking about becoming a music producer, and that he wants her to work for him. However, she is under contract with Raji (Vince Vaughn, in a performance right up there with Jar Jar Binks). Raji is a white guy who thinks he is black and doesn’t want to lose Linda.

But, we know Chili; he walks right up to Raji and his baseball-bat wielding bodyguard Elliot (Dwayne “The Rock” Johnson) and tells them that he is taking her, and that there really isn’t anything they can do about it. Then, there are a bunch of other subplots, cameos and random characters—too numerous and confusing to bother listing. Let’s just say that they don’t benefit the film in any way, shape, or form, and make the film nearly unbearable.

One of the great things about “Get Shorty” was how John Travolta carried himself. He was confident, cocky, assured; his eyes sparkled with every sharp line he delivered. Here, he just looks tired, and while there are a few moments where we recognize the old Chili, even then we feel bad for him.

What made the first movie believable was Chili’s love and passion for movies. In this one, he says he loves the music business, but his eyes tell a whole different story. In “Be Cool,” Chili Palmer isn’t Chili Palmer, he is John Travolta going through the motions and rehashing a once great character.

Like “Get Shorty,” the content of “Be Cool” is very offensive. The difference is that “Get Shorty” was rated “R” and contained numerous F-words, that were primarily heard by adults. “Be Cool” replaces the F-words with every other word in the book (while throwing in one F-word and many uses of God’s name in vain)—thereby maintaining it’s money-friendly rating, making it a film any kid with seven bucks can go see.

Parents, please keep your kids from seeing this film. There are a number of sexual references, constant vulgar language, violence, scantily-clad women, and just about anything else you can think of. Dwayne “The Rock” Johnson’s bodyguard character is clearly gay, which in itself will probably offend some. His character has a brief conversation with Raji that is drenched with references to gay sexual acts that had most people in the theater making some kind of shocked noise.

This is not the kind of film any Christian child or teenager should be seeing, or one many Christian adults will want to see.

“Be Cool” is a disappointment that I can’t even begin to describe. Even now, reading over my review, I realize there is so much more I want to say about how bad this film really is. Do yourself a big favor, avoid this movie at all costs.

Comments below:
Positive
Positive—I guess I would have to disagree with the critic’s viewpoint of this movie. I have seen both “Get Shorty” and “Be Cool” and I can tell you, both were great! I also seem to disagree with the critic’s moral rating of this movie. I guess, he is correct, if you are referring to youngsters watching it. So, don’t let anyone under 16 watch it. OTHERWISE, I did not find it anything remotely as “morally offensive” as the critic stated. From what he stated, you would think that they were cussing like a sailor and had sex scenes. …[there] was some scantly dressed woman dancing, not strip teasing, JUST dancing. If that bothers you, don’t watch it. It did not have any sex scenes. It did not have anyone feeling anyone up.

It did not have offensive language, when compared to the Hollywood standard. There was some use of language, but not as bad as “the critic” described. Generally, I find the critics from this Web site pretty on track with their review, BUT I would have to say that this time the critic was WAY OFF.

It was a great movie. When you see the Rock pretending to be gay, he did it in more of a mocking way than an agreement with the gender. It was simply a ploy for jokes, not a pushing of the gay agenda, plain a simple. If you want to see the gay agenda pushed, just watch NORMAL TV at prime time and you will get truck loads of it. Matter of fact, Cable doesn’t seem to have the problems that you see on “normal tv” these days. All you get is liberal bias and pushing of the gay agenda on sitcoms. This movie had nothing to do with the “gay agenda.” I would have to give this movie an A+ rating for its quirkiness and comedical originality…
My Ratings: Average/5

Anthony Woodcock, age 29
Negative
Negative—I have to disagree with the previous review from the 29 year old. I think you would have to be a deaf and blind individual to not recognize the vulgarity implied throughout the film. The innuendos are constant. I am blown away that the previous commentor did not see ANYTHING objectionable. The only thing I can think of is that some people can get so used to seeing objectionable material that it becomes “normal,” or not “that” bad. That is the only way that this movie could be looked at in a positive light.

I too, have seen “Get Shorty” and “Be Cool”. The sequel is incredibly disappointing, even if the bad language and sexual references were taken out of the picture. The movie seemed stale and overdone. The jokes were old; the plot was pretty much repeated. They even reused some of the same lines from “Get Shorty.”

To be honest, this wasn’t the worst movie I have ever seen… it’s about 1 step up from “Dude, Where’s My Car?.” But if you like that kind of movie. never mind. I just want to know how someone can look at skunk cabbage and think it’s a member of the rose family. That is how I feel about “Be Cool.” Hollywood could have done much, much better. I wouldn’t ask anyone to waste there time on this one.
My Ratings: Very Offensive/1½

Chicago Tribune, Michael Wilmington
…this stunningly inept movie is an early contender for worst film of 2005…

Eleanor Ringel Gillespie, Atlanta Journal-Constitution
…“Be Cool” is not really cool as “Get Shorty” was, but it’s entertaining, a frivolous cocktail rather than a vintage wine…

Kirk Honeycutt, The Hollywood Reporter
…draggy, generally unfunny screenplay… crammed with situations and characters, none of which inspire interest…