for some sexual references. 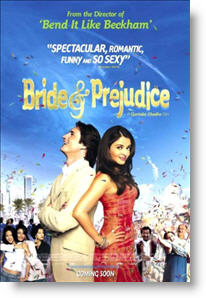 Teens! Have questions? Find answers in our popular TeenQs section. Get answers to your questions about life, dating and much more.
Hinduism

A story of friendship with a Hindu woman

An open letter to disciples of Hinduism

I finally understand those singing puppets in the Fandango commercials. They are a wink at Bollywood, a growing genre of films from India that combine elements of the traditional Hollywood musical with soap operas, romantic comedies, and a dash of travelogue. Try to picture a cross between “Moulin Rouge,” “General Hospital,” and “A Passage to India,” and you’ll get a rough idea of a Bollywood production.

“Bride and Prejudice” is director Gurinder Chadha’s (“Bend It Like Beckham”) attempt to bring Bollywood into the mainstream, and while I doubt it will create a sudden market for the more typical, three hour long subtitled traditional Bollywood pictures, it will give the more adventurous cinematic tourist an opportunity to dip his toe into the water and see if the temperature of the genre is to his liking.

Aishwarya Rai stars as Lalita Bakshi, an Indian version of Elizabeth Bennet, in a Bollywood update of the Jane Austen classic, “Pride and Prejudice”. Bride is rated PG-13 for some exotic dancing and a few crude sexual references, including one excerpt of a group of singing transvestites.

The use of Jane Austen’s “Pride and Prejudice” as source material for the plot is a double-edged sword here. The title may attract fans of the Austen novel who find themselves antagonized by the liberties taken with the plot before they realize that “Bride,” like most Bollywood films (or martial arts films, for that matter), relies only on the barest bones of plot, anyway. Musicals aren’t generally known for their intricate plots or fresh characters, so if the opportunity to see a familiar and beloved story retold is the main attraction, Austen fans may be disappointed.

On the other hand, the parallels to Austen help the movie make the necessary point that certain human conflicts and themes—marrying for love or money, the dangers of relying too heavily on superficial first impressions—are universal, so one need not have an advanced degree in Anthropology or Cultural Studies before one can appreciate or enjoy another culture’s art.

The story, such as it is, centers around Laleta Bakshi, the second eldest of four daughters of a respectable but not wealthy Indian family. When Balraj Bingley (Naveen Andrews, recognizable to American audiences from the television program “Lost”) brings his American friend, a rich hotel magnate named Will Darcy to India with him to attend a wedding, Darcy notices Laleta’s charm, beauty, and intelligence, but is put off by her matchmaking mother (played by Nadira Babbar, who manages to humanize a nearly impossible role).

Various miscommunications and misunderstandings threaten to keep the would-be lovers apart, including an aggressive but crude Indian suitor for Laleta’s hand and a handsome but mysterious former servant of Darcy’s who poisons the well of Laleta’s good will by spreading false gossip about her new American acquaintance.

The main thing that threatens to keep Darcy and Laleta apart, however, are those pesky but nebulous cultural differences. The tone of the genre keeps those conflicts from ever being particularly sharp or penetrating. Personal expressions of religious belief, for example, are absent from the film, and their absence is one obvious way in which the world that is created is a fantasy one. What little dramatic tension there is comes more from miscommunications and misunderstandings than from true differences that are negotiated or resolved.

Laleta accuses Darcy of thinking that Indians (and their customs) are lacking in the sophistication and advantages of Western practices. Since those characters, such as Mr. Kholi, who have immigrated or adopted Western practices are portrayed in the most negative light, the film seems to favor Indian culture and practices over American ones. That this attitude would be extended to include the superiority of the Hindu religion to Christianity could be assumed, although it is never overtly stated.

One of the weakness of the film in comparison to the more complex Austen material which it echoes is that the reevaluation of first impressions is strictly one sided. While Darcy must come to appreciate the qualities of Laleta and the culture from which she springs, there is no reciprocal deepening of respect or understanding on her part for Darcy’s character and way of life. This alteration from the source material is understandable given the fact that “Bride” is more fairy tale than social commentary, but it may irritate some American viewers nevertheless.

It is disappointing, though not surprising, that a film that lectures us about the evils of cultural stereotyping practices so much of it, but then again genre pieces are normally filled with stock characters rather than complex personalities, and what are stock characters if not, basically, stereotypes?

On a more positive note, there are several broad themes in the film on which Christians can profitably reflect. When asked what he likes about India, Darcy points to the commitment he has seen to the nuclear and extended family, a commitment that is often lacking in a dispersed American culture that can be overly preoccupied with making money and getting ahead. Although Mrs. Bakshi is portrayed as an unmannered gold-digger, the film (true to the Austen roots here) portrays a society in which parental and generational authority is taken seriously enough that its heroine does not practice contempt towards her parents, however embarrassed she might be by her mother’s behavior. There is a nice, quiet scene between Laleta and a friend who has admitted to marrying Mr. Kholi without much affection in which Laleta places compassion for her friend’s feelings above her own pride.

The Bollywood ingredient that was the most interesting to me, though, was its relentless and unabashed exuberance. There are three weddings in the film, and each is used as a stage for elaborate musical set pieces that merge music, dance, costume, and story to allow the characters to express their joy at the pleasures life sometimes affords and to optimistically hope for the day when they will participate in them directly rather than vicariously.

There is a genuine happiness for the welfare of others that is so contrary to the spirit of envy that permeates much of contemporary life and film that it is hard not to root for these characters to have good things happen to them. In fact, in a year in which all five films nominated for the Academy Awards’ best picture feature depressed and depressing characters who act as poster children for Thomas Hobbes’s claim that life is solitary, poor, nasty, brutish, and short, it is more than a bit refreshing to see a movie with a palette that uses more colors than black, white, and gray, and whose lyrics, as hammy as they are, can include a wedding party singing, “Life’s great / let’s celebrate!”

It has been almost thirty years since Richard Foster wrote in his classic devotional Celebration of Discipline that “the carefree spirit of joyous festivity is absent in contemporary society.” In his chapter on “The Discipline of Celebration” Foster reminds readers: “Joy is part of the fruit of the Spirit (Gal. 5:22) …Joy produces energy. Joy makes us strong.”

“Bride and Prejudice” had a lot of cheesy lyrics. Its tone and style were over-the-top and heavy handed. It was utterly predictable to anyone who is marginally familiar with the genre or the source material. But it was fun, and its refusal to take itself too seriously covered a multitude of artistic sins.

Positive—I think the reviewer missed the point re: comparing American and Indian culture, as discussed in the film. Religion was not discussed at all, so there was no discussion of Hinduism vs. Christianity—real OR implied. The cultural comparison that WAS discussed had far more to do with materialism and how the Indian culture found happiness with what they have—family, their friends, music, nature—rather than the need to surround themselves with opulence. The movie venerates family and should be acceptable to anyone who wants a fun, light time at the cinema.
My Ratings: Good/3½