What are the Biblical guidelines for dating relationships? Answer

How do I respect the wishes of my non-Christian parents while still following God’s will? Answer

How do I know what God’s will is for my life? Answer

“Bend It Like Beckham” is an enjoyable film which is something of a cross between Hoosiers and My Big Fat Greek Wedding. The plot’s central characters are a pair of teenage girls who meet through the love of playing soccer.

The film’s title is a reference to David Beckham, England’s No. 1 soccer star, and his ability to make a soccer ball curve (just as baseball pitcher does), hopefully, past the goalie.

Jess (played by Parminder Nagra) is the youngest daughter of an upper middle class—but very traditional—Punjabi Indian family settled in a pleasant London suburb. Jess has adept at soccer by playing with her older brother and his friends in the park across the street from their home. Jess is also a huge fan, keeping posters of Beckham on her wall.

Jess is spotted by Jules (Keira Knightley) who’s also devoted to the sport, albeit more formally. She plays on a girls’ club team, coached by the handsome Joe (Jonathan Rhys Meyers) and one day approaches Jess and invites her to try out for the Hounslow Harriers. Jess earns a spot on the team and the two become fast friends.

Both girls have issues to deal with at home, however, and this is where the film derives most of its humor. Jules’ mom (played by Juliet Stevenson) is constantly trying to “cure” her daughter of athleticism by trying a little too hard to interest her in shopping and fashion and going out with boys.

Jules’ dad, meanwhile, has set up a goal in the backyard and is perfectly happy to have the son he always wanted. Jess’ parents, meanwhile, are traditional, religious people putting the finishing touches on an arranged marriage involving Jess’ older sister Pinky (Archie Panjabi), who in turn is a shopaholic valley-girl-talking clubgoer once she’s beyond her parents’ gaze.

Jess’ mom grows concerned that her youngest daughter hasn’t yet learned to “cook a proper Indian meal” while her father (played by Indian film veteran Anupam Kher), an airline pilot, holds deep seated fears related to the way he was treated by White Britons years earlier when he held his own dreams of playing sports. Sternly, they demand that Jess give up playing soccer. 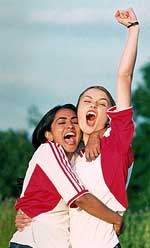 When a relative sees Jess and Jules hugging at a bus stop following a game, they are horrified and report to Jess’ parents, believing Jules is a boy because of her short hair. Likewise, Jules’ mom misinterprets their friendship in a different manner.

A few aspects of this film are incongruous with Christian values in the U.S. For example, the teenage soccer players are shown drinking beer on a trip to Germany. This is due to the fact that drinking ages are lower in Europe (the characters Jules and Jess are 18 or so). There is also a love interest involving the coach. In the case of this film, he’s portrayed as being not a lot older than the girls in question. There is reference to homosexuality, and some sexuality is briefly portrayed.

In my opinion, the positive aspects of this film far outweigh the negatives. The positive moral points of the film are love of family and the value of friendship. The film is well-put-together and a lot of fun.