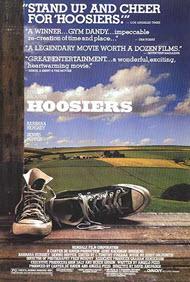 Based on a true story, “Hoosiers” is an enjoyable, underdog-in-sports type film with a sub-theme about relationships

In 1951, Norman Dale (Gene Hackman) is hired as a teacher and basketball coach at a small Indiana high school. He’s a former college coach who had done a stint in the Navy after being banned for life from college basketball due to his violent temper (specifically, for hitting one of his own players).

In his new job, he doesn’t have a lot of outstanding material to work with; the school’s best player refuses to report because he’s still attached to the deceased previous coach, who had been a substitute father to him. And Dale’s authoritarian style alienates many of the townsfolk, who are accustomed to being armchair coaches and all having a hand in things. On the other hand, Dale attempts to rehabilitate the alcoholic father of one of his players by making him an assistant coach. And as the town begins to understand that Dale may actually know what he’s doing, he gradually wins the support of many of them.

Over time, the team develops a winning instinct; people start thinking about a trip to State. These were the days when interscholastic sports were generally for boys only; the smallest schools fielded teams in just a few sports; and there were no size classes in tournaments, so a school with an enrollment of 50 would sooner or later have to play the likes of South Bend Central. Is State possible, or is it just a dream? you’ll have to rent it to find out.

There are a few profanities and some on-court violence. The assistant coach (Dennis Hopper) doesn’t always stay sober, but his drinking is portrayed negatively. Good family relationships and teamwork in athletics are both stressed as positives. The strong convictions of one of the players (and the prayer he offers before games) are respected.

I recommend this film for the entire family. But if preteens are included, the parents should preview it (as they should do with almost any post-1970 film) and be ready with the fast forward button in a couple of places.

“Hoosiers” is a very good movie, full of excitement for sports fans, and enough drama to interest those who are not enthusiastic about basketball. While I can think of no spots in the movie that would need to be fast-forwarded, there is a spot or two of rough language which can easily be muted when needed. Christianity is seen in a positive light in this movie, as well as character qualities such as discipline, loyalty, kindness, forgiveness, and Christian love. While the end of the movie is slightly predictable, it will inevitably give viewers goose bumps each time they watch it. My Ratings: [3½/4]