Today’s Prayer Focus
For Love of the Game
MPA Rating:

for brief strong language and some sexuality 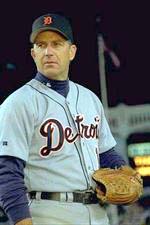 I love movies about baseball. It was not too difficult for me to get excited this Fall about “For Love of the Game.” It could be the perfect date movie—baseball and a love story.

Kevin Costner portrays a star pitcher for the Detroit Tigers. His character, Billy Chapel, has a twenty-year major league career. He is successful as a strike-out pitcher, but finds himself always “striking out” in the romance department.

The film has strong performances by Kelly Preston, John C. Reily, and Jena Malone—an “A” for casting. But this mid-life-crisis film is hurt by the presentation of premarital sex and alcohol.

There are some positive qualities like a strong sense of teamwork and determination. And on baseball realism, this movie is one of the best. As an avid viewer of live baseball, I can say “For Love of the Game” really takes you there. You can almost smell the hot dogs. Truly America’s favorite pastime.

This is a fable for Baby Boomers. Billy does profess to believe in God and even prays during the game. It is a “feel good” cinematic touch. But Christians should seek to pray and then resist temptation. God’s name is used in vain and there are 18 obscenities and other crude references. There is no nudity, but some adults are shown in their underwear. Condoned premarital sex and language makes this film less than a perfect game. It is not a total shut out, though.

Not recommended for younger viewers due to too many mixed messages to sort out later. As an actor, Costner still shows that he has “good stuff.” But like a pitcher shaking off signs from a catcher, you will find some objections in this film.

When making a film that is allegedly a romance, it’s prudent to have the two characters the film is forcing together to seem right for each other. But by the end of “Game”, I hoped that Costner would throw a fastball smacked for a homerun over the right-field stands, Preston would get on the plane to London (far, far away from Costner) and both of them would realize how utterly awful their relationship was. Cloying, disturbing, and sloppy; how did Sam Raimi go from “A Simple Plan” to this? My Ratings: [2½/1½]

Matthew Prins, age 22
…Christian-wise, there is not much in this movie to promote. On the good side, It promotes teamwork, and shows how respect beings out the best in people. Also in one moment while he has a pain in his shoulder before the last inning, Jane tells him to pray God will take away his pain. She asks him if he believes in God, and he says yes.

On the down side, however, there is much that makes this movie avoidable. Billy and Jane spend the night together, And get physical in an elevator right after they just meet. During Spring training, Jane finds him half-dressed following a promiscuous round with his massuese. More than a dozen blasphemous uses of God’s name. There are several “s” words, one “f” word, and other coarse language. The catcher for Billy uses his middle finger as a signle to hit the batter in the head.

Several schenes show Jane’s teenage daughter Heather, who was conceived while Jane was a teenager. And while Jane elected to have the baby and claims not to regret that choice, there is something missing. Heather senses it and tells Billy, “She had me when she was sixteen and she never had a love story. And now it’s like she doesn’t believe in it.” Heather also escapes from her dad’s house saying, “he’s stoned 90 percent of the time anyway.

Laura Johnson, age 52
This movie was a cute movie that most adults would enjoy… The movie was mostly clean, Costner used a lot of profanity and it showed that he liked to sleep around. It was offensive. It was a cute movie, but with the sex and the profanity it just ruined the movie. I do not recommend this movie.

Ronda Jones
The film did an excellent job of making me interested in a baseball game—I’m not a sports fan. However, I was somewhat disappointed by the love story. Billy Chappel has a lot of things on his mind while pitching in a game that may be the most important of his career. His throwing arm is hurting. He’s learned that his team is being sold, and he’s being traded.

Jane, his longtime girlfriend, has announced that she’s leaving him. Their romance is told in flashbacks. Billy and Jane plan to have a no-strings, casual relationship, but when stronger feelings take over, neither knows how to deal with it. Jane is cautious because she’s had her heart broken before, and Billy places baseball above all else. They spend most of the time bickering and separating, and initially, their relationship is based on sex.

One problem is that Billy’s character is more fleshed out than Jane or any other character in the story. Kevin Costner looks and plays like a real baseball player, and that lends credibility to the scenes on the field.

Billy is asked at one point if he believes in God, and he says yes. He says a prayer during the game, asking for healing in his arm, but it’s clear that he’s not a Christian man. No scenes of graphic sex, but “morning after” scenes imply that it took place.

Profanity galore from the baseball players, including taking the Lord’s name in vain.

Despite of this, I liked the film because its main theme was be true to yourself. It also emphasized the fact that adults do have to grow up sometimes, as Billy’s character eventually learns. For Love Of The Game is an antidote for adults sick-of-the-summer’s unappealing teen movies.

Hillari Hunter, age 37
Movie Critics
…the most lugubrious and soppy love story in many a moon… yet another movie in which Kevin Costner plays a character who has all the right window dressing but is neither juicy nor interesting.

Roger Ebert, Chicago Sun Times
Kevin Costner swears and drinks and sleeps with a woman their first date and later does the same with his masseuse.