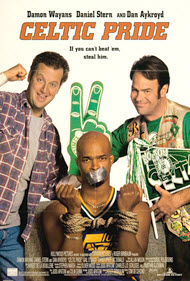 This is a silly, slap-stick comedy that most younger viewers and dedicated sports fans will enjoy. Daniel Stern and Dan Aykroyd play the believable, fanatic fans (I call them ultrafans) Mike O'Hara and Jimmy Flaherty rooting for the Celtic Pride! Jimmy is so engrossed into the sports life that his family life is suffering.

The Celtics have a chance to win the NBA Finals! Unfortunately, the Utah Jazz are jamming and the series is tied at 3 games each. On the Jazz, Lewis Scott (Damon Wayans) is the “Michael Jordon” of the team, truly outperforming his teammates and opponents. Unfortunately, ultrafans Jimmy and Mike take matters into their own hands.

From a Christian perspective, this movie does not promote good morals. The Celtics “ultrafans” are so addicted to their sport that they go beyond what is legal. They booze and schmooz the Jazz’s star player and steal him. Now one could argue it was a “joke” that got out of hand, but when they nabbed him, they didn’t free him even though their consciences were clanging loudly that they should. Further, the language was filthy and sometimes the humor was crude.

I would recommend this movie to basketball fans if they bear in mind the warnings mentioned above. For parents of younger children, even though theft was involved, Jimmy and Mike did suffer some consequences from their actions. However, the consequences were unrealistic and some biblical reminders are probably in order. If the movie had been done cleanly, it would’ve been much more enjoyable and probably come in with a G or PG rating.

Negative—We made it a maximum of 15 minutes into it before we pushed the “stop” button and returned it to the video store for a refund. Advertised as a comedy for the whole family, we were sorely displeased. Profanity abounds, and the humor was so off color that we found ourselves gritting our teeth rather than chuckling. Don’t waste your time or money. Humor has hit the bottom of the barrel with this one. My Ratings: [2/2]
Kristy Cross, age 39