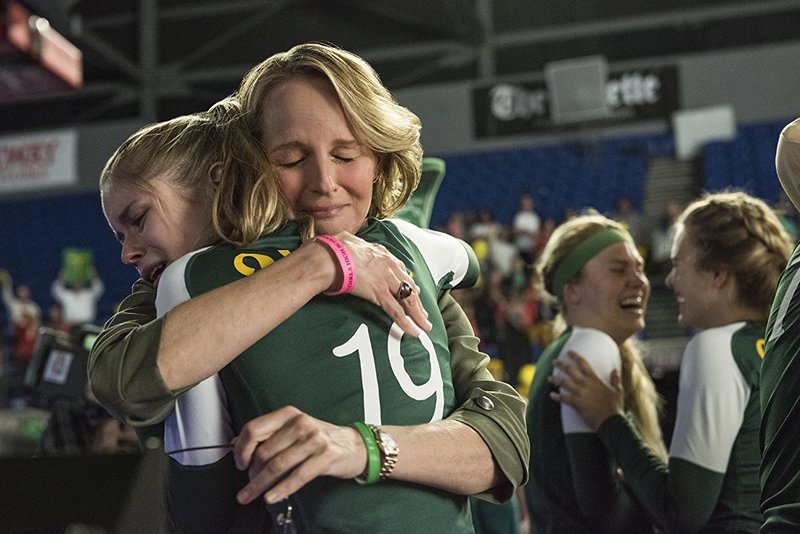 for some thematic elements. 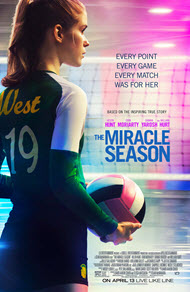 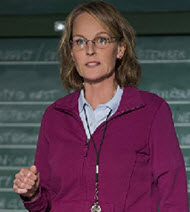 WHY does death exist? Answer 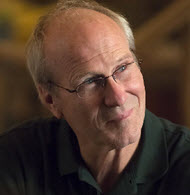 overcoming depression, grief and “what if” thoughts that follow personal tragedy

Overcoming obstacles through teamwork—depending on others

How did bad things come about in our world? Answer 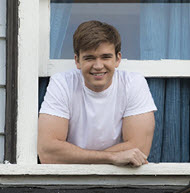 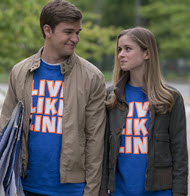 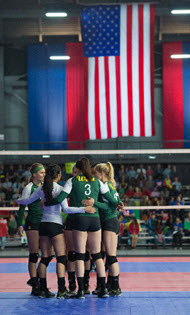 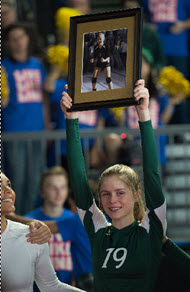 “Every point, every game, every match, was for her.”

“Have you ever met someone who could make anything into an adventure?”

The movie’s opening line is the perfect introduction to its central character, the vivacious captain of a girls’s high school volleyball team, Caroline “Line” Found (Danika Yarosh). Caroline’s ebullient personality is infectious; she makes friends with everyone she meets, even players on opposing teams.

Coming off an emotional state championship win the year before, Caroline and her teammates have aspirations of repeating it. After rolling past their first opponent, another championship seems all but assured.

Then comes the tragic night when the news of Caroline’s fatal driving accident sweeps through the community like wildfire. The grief-stricken volleyball team’s hopeful quest for a second state championship comes to a devastating standstill. But with motivation from their inspiring coach and a resolve born out of their desire to honor their fallen friend, the players channel their anger and guilt into one all-consuming goal: “Win for Line.”

Based on the true account of how the Iowa City West High School girls’s volleyball team won the state championship against all odds in 2011, “The Miracle Season” is a strong character piece that also features some pulse-pounding action during several volleyball tournaments. Ensuring that the sports elements didn’t run away with the story are screenwriters Elissa Matsueda and David Aaron Cohen, who was already familiar with the genre, having co-written “Friday Night Lights” (2004). The man responsible for keeping the character moments meaningful and the volleyball game sequences taut with excitement is director Sean McNamara, who also helmed the tragedy-turned-victory sports film “Soul Surfer” (2011).

The movie’s theme is affirmed during the opening narration—life is an adventure, so live it to the fullest. That’s certainly a philosophy Caroline lived by, since she was always the instigator of fun, as evidenced in the scene where she tries shoving two pieces of pizza into her mouth. Caroline’s energy and exuberance for life is sorely missed by the team when she’s gone.

Another theme deals with grieving—how we deal with tragedy. Some of the volleyball players feel nauseous at the thought of returning to practice after Caroline’s death. In fact, they’re so wracked with grief that it’s as if they’ve forgotten how to play… their noodle arms and lethargic movements are outward signs of their inward despair. It isn’t until Coach Bresnahan (Hunt) challenges the girls to take their hurt and apply it to the game that the team starts winning again. Turning tragedy into motivation is another of the movie’s motifs.

Caroline’s father, Ernie (Hurt), has two poignant scenes while talking to a pastor inside a local church. In a scene soon after Caroline’s death, an angry Ernie says, “God hasn’t exactly shown up for me lately.” Though these are the words of a father who is bitter over the loss of his daughter, they aren’t intended to be irreverent or malicious. Ernie’s reaction is completely human, and is understandable under the circumstances. However, even though blaming God for human tragedy may provide temporary relief from grief, it doesn’t produce permanent answers or give someone the absolution they seek. In a later scene, after Ernie has come to terms with his daughter’s death, he realizes that he was blessed to have Caroline in his life and understands why God would take her from him. It’s a powerful scene that reveals Ernie’s acceptance of God’s plan, regardless of the personal pain it caused him.

What is God’s providence? Answer

What should we thank God for? Answer

What is the Sovereignty of God? Answer

What does the Bible say about God’s sovereignty, election, predestination, and man’s free will? Answer

As a PG film, there’s very little objectionable material. There is only light profanity and several instances of euphemistic expletives like “heck.” There are also some unsavory phrases in the movie, such as: “for gosh sakes,” “it just sucks,” “that last announcement sucked” and “am I the only one who’s pissed off?”.

The film doesn’t contain any sex or nudity. However, in one scene, Caroline asks her dad if he’s going to get lucky that night, but then regrets broaching the subject. This inappropriate comment adds nothing to the movie and should’ve been taken out of the script from the start. There’s some alcohol consumption when Ernie offers Coach Bresnahan some more “champagne,” even though it looks like they’re drinking bottles of beer. In a later scene, Kathy is seen drinking from an identical bottle on the steps outside her house.

Even though Caroline dies in a moped accident, the crash isn’t shown; so thankfully there isn’t any graphic violence in the film.

The film’s various production elements are superb. The locations surprisingly resemble the Iowan countryside, even though the movie was filmed in Vancouver, British Columbia, Canada. These locations add a great deal to the team’s road trips, especially during the snow angel scene. The evocative trumpets in Roque Banos’ score perfectly capture the film’s bittersweet aspects. The crowd singing Neil Diamond’s “Sweet Caroline” at the end of the movie is a nice touch.

“…Season” is a deeply moving true story about finding the courage to carry on after a tragic loss. Despite its similar theme to “We Are Marshall” (2006) and similar plot to “Hoosiers” (1986), “…Season” is an inspirational sports movie where the miracle on the court pales in comparison to the one that takes place inside the hearts of the grieving players and community.

Note: Be sure to sit through the end credits for additional biographical information about the characters and to see clips from the actual games played by the West High School volleyball team.

Secular Movie Critics
…“The Miracle Season” is a pleasant surprise, the rare inspirational sports movie that actually earns its tears. …
Bill Goodykoontz, The Arizona Republic
…clean family entertainment… a worthy option, especially if you have older children. …packs an emotional wallop here and there… While religious faith is mentioned, it’s not a driving force of the story by any means…
Angie Campbell, Upstate Parent
…it’s worth your time, whether you’re familiar with the real story or not. …If you see “The Miracle Season” this weekend, the best advice I can give is this: Don’t leave too early. The most emotional part of the movie is during the closing credits. It is there Hollywood ceases, and reality takes over. …
Jeff Linder, The Gazette
…Faith-influenced movie is based on an inspiring story about a volleyball team that rallied together to honour the memory of one of their players… What sets The Miracle Season apart from the movies it barely tries to distinguish itself from are the unusually heavy emotional stakes. …peppered with gentle bits of spiritual musings…
Radheyan Simonpillai, Now Toronto
…‘Miracle Season’ is flawed but inspirational… formulaic but rousing tale of teamwork, girl power and community, and a tearjerker to boot. …But it relies on storytelling that tells rather than shows. …
Katie Walsh, Tribune News Service
…clichéd, predictable… and totally worth checking out… A good cry about nice people doing positive things never hurt anybody. It might even make your day. [B+]
Kim Hughes, Original CIN
…stalls as sports film, affects as drama about a volleyball team… Hunt brings reverence to her depiction of the real-life Bresnahan…
Carla Meyer, SF Gate (San Francisco Chronicle)
…it is about its big heart and its inspirational message. As such, it’s a rather generic trip through sports movie clichés, but it’s delivered with enough conviction that it lands in bounds. …The best thing about “The Miracle Season” is it lets that story unfold and doesn’t do anything to stand in its way.
Adam Graham, The Detroit News
…Sappiness sans substance…
John DeFore, The Hollywood Reporter