for emotional thematic material, a crash scene, and mild language 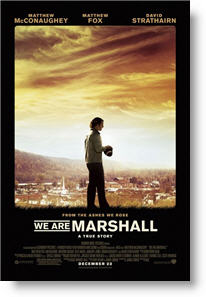 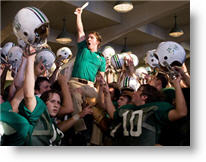 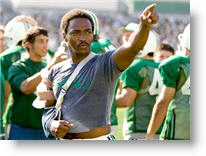 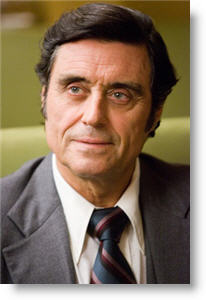 “From the ashes we rose”

There’s just something different about seeing a movie when you know that it’s a true story. It affects us differently. We walk away realizing that real people actually experienced all that. Even more so when a major tragedy is involved, followed by healing and renewal that can only be described as divinely orchestrated. When we see tag lines like, “Based on true events”, we understandably become suspicious about how much is reality and how much is fiction. Not so with “We Are Marshall,” which begins with a solemn but clear statement: “This is a true story.”

The story covers the events of 1970-71 in rural Huntington, West Virginia, home of Marshall University. On the fateful night of November 14, 1970, nearly the entire Marshall football program was wiped out in a plane crash that devastated the fans, the families, the University, and the town. The calamity left just 3 veteran players and 1 assistant coach, who by God’s sovereign design, were not on the flight that night.

After 75 funerals, the weary college town can’t cope with the thought of continuing the MU football program. But the remaining players, led by a well-acted team co-captain Nate Ruffin, insist that Marshall football must continue to honor the victims. Finding coaches and players proves very difficult, and leads to the hiring of a most unlikely coach named Jack Lengyel (Matthew McConaughey). Lengyel is from small town Ohio, and has no ties to Marshall whatsoever. Jack’s personality is magnetic, if a little eccentric, and watching him pull things together is nothing short of fascinating and positively awe inspiring.

I wish the youth of today were more interested in movies like this. The theater was scattered with 25 or so people, almost all of them over 50, and old enough to remember that sad day in 1970. The film presents strong lessons in dealing with tragedy and what’s really important in life, and does it with almost no objectionable material. The crash scene is very emotionally intense, but not graphic and bloody. Foul language is very mild (with zero uses of the Lord’s name in vain), and there’s not even a hint of sexual immorality. Scenes involving alcohol are few and mild.

The characters are well-developed and believable, and most viewers will empathize with all of them, to some degree. The movie does a masterful job of creating both the heart-pounding excitement that’s part of college football, and the heart-stopping horror that’s part of catastrophe. And yet, it doesn’t leave viewers down in the dumps. As was so well done in the movie “Invincible,” they’ve added emotion through the use of some great classic rock music from the late 60’s. Due solely to the intense emotional nature of the story, I would recommend the movie primarily to teens and older.

The movie’s one lacking is that it contains virtually no Christian content. Not that we should expect such from Hollywood, but it sure could’ve made this already fantastic film even better. God’s fingerprints are all over this story, and I am quite sure that much of this Bible-belt town and University turned to the Lord in ways that only the tragedies of life can make people turn. None of that is evident in the movie, save for a tiny part at the very end, when viewers are treated to photographs and video clips from the actual events. Within this brief slide show is a photo of a theater marquis, in what I can only guess to be downtown Huntington, WV. The caption quotes part of Job 1:21, “The Lord gave, and the Lord hath taken away.”

Why do such tragedies happen? Why do good people die in the prime of their lives? Why are people left behind to cope with depression alone? None of us have adequate answers.

► Are there biblical examples of depression and how to deal with it? Answer ]

► What should a Christian do if overwhelmed with depression? Answer

But one thing we do know for sure: our God is totally sovereign. His own designs and purposes are behind every single microscopic event in the history of the universe. Even unspeakable disaster? Yes, even that.

Matthew 10:29: “Are not two sparrows sold for a penny? Yet, not one of them will fall to the ground apart from the will of your Father.”

Isaiah 43:7: “I form the light and create darkness. I bring prosperity and create disaster; I, the Lord, do all these things.”

Lamentations 3:38: “Is it not from the mouth of the Most High that both calamities and good things come?”

So how can we rest easy then? We can’t really, until we get to heaven. This life is short and never sure. But we can live without fear, having faith and trusting that God’s purposes will always come to pass, and are ultimately good. Even the horrible crucifixion of Christ was God’s own design (Acts 4:27-28). If we depend on Him alone for salvation, we can rest assured that all our questions will be answered in the next life.

Positive—My husband and I went to see this film yesterday based on some positive secular radio reviews. The movie was very original, and the special effects were flawless. When we left the movie we had huge smiles on our faces. Unlike many movies these days, there seemed to be no particular Hollywood “agenda.” We thought that our 8 year old son would really enjoy it and so my husband will take him to see it today. Our 6 year old will stay home though… he scares easily in movie theaters. There are some intense scenes in the movies first half. We will probably purchase this on DVD when it comes out.
My Ratings: Better than Average / 4½
Zoe, age 32
Positive—This is a film that looks at individuals, who happen to be involved with football, dealing with tragedy. Do not expect a “Rudy” or “Remember the Titans.” The movie attempts to deal with all aspects; those feeling quilty for missing the tragedy and still being alive, those who lost someone, and those who try to get everyone to move along. It succeeds in places, not so much in others. Thought-provoking, but not providing any answers other than to get on with life.
My Ratings: Better than Average / 3½
Bill Walters, age 58
Positive—My husband and I saw this film with our two boys (9 and 10), and we really enjoyed it. We felt that the movie definitely brought conversation about death, and it was a good time to share with them about loss. They got a bit restless toward the end, but both liked the film. I cried a couple of different times in the movie and felt they honored the actual families involved in the horrible plane crash. I say 'go see it.'
My Ratings: Better than Average / 4
Shannon, age 38
Positive—I am not a football fan, or even a sports fan, but I enjoyed this movie very much. It is a marvelous and heart-breaking true story; I cried.

This movie is different from a lot of other sports movies in that it is not really about winning. ***Spoilers: The Marshall football team loses their game right before they die on the plane, and the team that is recruited to replace them is a losing team.***

This movie is more about grieving and people’s differing responses to tragedy. This was a well-made movie; all of the actors and actresses did a good job, especially Matthew McConaughey and David Strathairn. Some of the dialogues at the beginning of the movie are hard to hear and follow, and the two coaches' wives were a little too one-dimensional and could have used more screen time, but other than that, the movie was great.

There was almost nothing morally offensive, although there was some swearing and one scene where some of the football players get drunk. This is a good family movie, but might not be the best for young children due to the airplane accident (and the swearing and drinking). If you have not seen this movie, but enjoyed movies like Remember the Titans, The Greatest Game Ever Played, or The Rookie, I would definitely buy or rent it.
My Ratings: Moral rating: Better than Average / Moviemaking quality: 4½
Sarah C., age 18 (USA)
Negative
Negative—I was encouraged to give this movie a shot after reading the positive reviews on here. I have two young children and kept them occupied for the plane crash, since I read that it may be the only thing to worry about with them. About half way through and forty cuss words later I was so disgusted I had to turn it off and apologize to my children for subjecting them to it. They both learned a new word they have never heard before, since it was repeated over and over and that was Sh-t. There was one GD as well, though it was covered slightly it was clear that is what the guy said.

The cussing along with young people drinking beer and partying in the dorms, young boys staring at a girl’s backside and the total absence of anyone calling on God or praying after the greatest tragedy a school has ever faced is enough to weep for the souls of the people in this “true story.”…
My Ratings: Moral rating: Offensive / Moviemaking quality: 4
Jeff, age 36 (USA)
Comments from young people
Positive—I went to this movie with my two best friends and was pleasantly surprised. I recommend this movie especially for football fans, because I, myself, loved it, and I’m a huge football fan. My two best friends loved it, also, but one of them thought the acting was better than the story line. The acting was, indeed, incredble. Not only was there no profanity, sex scenes, or any of that sort, they didn’t overdo the emotion part of the movie to where the person watching was crowded with two much. The story line, acting, and overall morality of this movie makes it a must see!
My Ratings: Excellent! / 5
Alexis, age 14
Positive—My dad got free movie tickets from work so we decided to go see “We Are Marshall.” …we were a fan of Matthew Fox (Jack on ABC`s “Lost”). The plot was good, and I think it was about time the story was told. The way they showed the tradgedy was awesome. This is a sure movie I`ll buy. Greatest movie of the year.
My Ratings: Excellent! / 5
Michael Turnbill, age 13