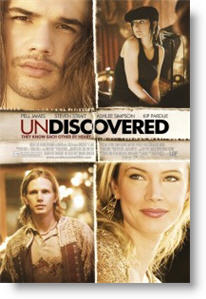 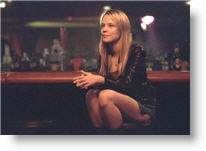 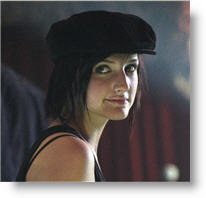 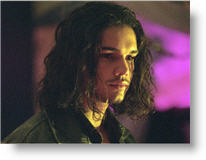 “They know each other by heart.”

“Undiscovered” is a romance with light moments, probably stopping just short of a romantic comedy. The romance is between an aspiring model and unknown muscian, neither of which have yet to hit it big. They have a surprise encounter on a crowded rush hour subway in a NYC burrough, but aren’t able to connect until another chance encounter in a bar in Los Angeles.

Their careers take off in different directions, and their relationship suffers unexpectedly as their new fame ends up being more (and much different) than they had imagined it would be.

Pell James plays the part of New York model Brier Tuckett. Pell’s character fits the bill of the stereotypical model from a mid-western farm, and she comes off sweet, but emotionally guarded throughout the show, as a result of a complicated and failing relationship with an older and famous musician. She had done well in her career, and is one of her agent’s (played by Carrie Fisher) better models.

The role of unknown musician Luke Falcon is played by Steven Strait. Strait takes the difficult role of song writer/singer a long way, and makes the “live” music sets believable in both the rock and ballad selections. He pursues James, but her earlier relationship with the older musician hinders the development of theirs.

The story is centered around the strained relationships between these two main characters as well as a key personal bond each of them have: James with her best friend and struggling actor Clea, played by Ashlee Simpson, and Strait with eccentric character brother Euan Falcon, played by Kip Pardue.

Simpson was wonderful as the friend with a confused boyfriend/brother crush on Strait, and Parker was full of chuckles for the duration of his screen time. However, the best role of the movie was that of entertainer Peter Weller as the record label executive Wick Treadway. Weller pulls this short but punchy role off as only someone deep in the actual recording industry could do.

While the movie was surprisingly entertaining, given its published trailer presentations of heavy rock scenes and their associated life styles, it did have some things that warrant a warning.

Many of the scenes are in a bar setting, and, of course, alcohol is widely used. Additionally, there is one comedic scene involving recreational drug use could have been left out.

Pell does a topless scene as part of a photo shoot during her stay in LA, but the scene is shot from the back and her vulnerability is stressed over her sexuality in that scene. Regardless, it added nothing to the movie and could have been done just as well without the nudity.

The language is somewhat offensive—with several coarse and vulgar terms used. I counted less than twenty such uses of words most would find offensive including b***h, d**k, and a few others. Happily, the movie does not bombard its viewers with a steady stream of this language nor werer there any misuses of the Lord’s name. In that respect, it was a better time than most 30-minute television shows on network TV. Some of this language is between the Falcon brother characters as they express affection for one another.

The movie has a fairly strong undercurrent of sexuality, such as the tension that builds as we await for the first kiss between Brier and Luke. There are strong implications that an improper sexual relationship exists between Falcon and Brier’s competition. I would say that it is not for pre-teen viewing.

Most of the photography was well done, but there are a couple of scenes in the movie where hyper-closeup shots of the character’s faces appeared blurry. To emphasize the rock theme that is often present, some of the photography is swirling and almost haphazard. I found that a little uncomfortable.

Still, the movie has a number of humorous moments and found a way to be tender even with the negative life style that surrounds the entertaiment industry.

Neutral
Neutral—This movie is a pretty good movie, however it does have some sexual dialoge and some mild sex scenes. It teaches the value of the importance of self-confidence. I would rate this movie a 3 star… for average.
My Ratings: Average/3

John, age 44
Comments from young people
Positive—This movie was really good for teens. It’s romantic, but in a non-sappy way. The music is great!! I couldn’t get the songs out of my head. I really liked all of the characters, except the Brazilian lady. She was creepy looking.
My Ratings: Better than Average/4½

Bree, age 13
Positive—…I enjoyed this movie because I love music so much! I think it is a young romance and it is a good movie for people between the ages of 13 and 30.
My Ratings: Average / 3½

Bree, age 13
Movie Critics
…as shallow as a music video…“Undiscovered” is the kind of elliptical romance in which any scenes of substance… have been omitted to clear space for the music video montages…

Randy Cordova, The Arizona Republic
…entirely dispensable, soapy caricature of a love story …Should have no trouble living up to its title at the boxoffice…