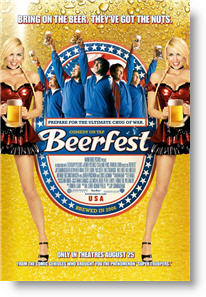 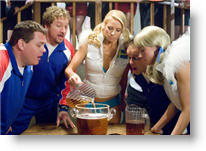 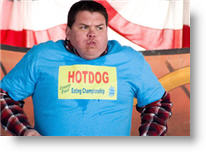 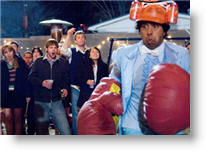 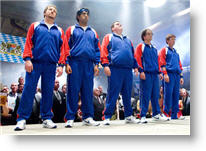 “Prepare for the ultimate chug of war.”

Jürgen Prochnow, who played the returned Jesus in “The Seventh Sign,” plays quite the opposite sort here, as Baron Wolfgang von Wolfhausen, the filthy-mouthed son of a German brewer who inherited his father’s fortune and now runs an underground fest within a fest. “Beerfest” is the movie’s mythical drinking olympics which supposedly runs concurrent, but under secrecy, with the more legitimate Munich Oktoberfest (the largest annual festival in the world, and the commemoration of Prince Ludwig I’s wedding).

Wolfgang’s father is similarly named Ludwig. Two American grandson’s of Wolfgang’s illegitimate half brother, Johann von Wolfhause (Donald Sutherland) are dispatched to the family homeland to disperse their grandfather’s ashes, after he chugs three beers and immediately pulls the plug on himself at the hospital. That’s when all the family skeletons erupt into a clash of culture, inebriation, and bawdy lowbrow humor.

Johann’s grandsons, Jan and Todd (Paul Soter and Erik Stolhanske) are the primary characters in the film. The whole of the movie is based on a secret recipe for beer that was supposedly stolen away to America, but is coveted by the German relatives who stop at nothing to obtain it for their brewery. In the end, “Beerfest” determines the rightful owner, and everything goes to the team that guzzles the great glass boot of beer (das boot) without spilling a drop. “Das Boot” was also the name of one of Prochnow’s more legitimate movie credits, and “Beerfest” extends a couple of nods to that career-clinching role.

Team USA ultimately grows to five, as Jan and Todd recruit a glutton named Landfill (Kevin Heffernan) and a male prostitute named Barry (Jay Chandrasekhar, who was also the film’s director). The fifth member is a profane, yarmulke-crowned, lab-nerd named Fink (Steve Lemme). The five team members, collectively, are the comedy troupe “Broken Lizard,” which is responsible for the script.

The movie is like a grown idiot’s version of college frat-reflection, as every scene reminisces with over indulgence and drunken debauchery in collegiate style. Breasts and bottoms are bared, indiscriminate sex is simulated, and beer is consumed with absolutely no moderation at all. In fact, the beginning of the movie rightly warns that if the viewers should drink the quantities depicted, they would die. No truer words have been said, but one realizes going in that the whole thing is a farce and that nobody would really drink that much or act that retarded.

However, the various drinking “sports” depicted have a basis in reality, and anyone who comes of drinking age in the secular venue of Greek life will undoubtedly be exposed to one or more of these. If there is any redeeming thing to the movie, it’s the portrayal of inebriated stupor and its aftermath (falling down, hangovers, vomiting, waking up in bed with strangers, forgetfulness, acting stupid, brawling, etc).

While there is a humorous tone to the film, most of the jokes are pretty lame, and the absolute filthy and infantile dialogue is just not worth the two hours of life it takes to imbibe such drivel in hopes of a chuckle.

Because of the presence of “Saturday Night Live” cast member, Will Forte (cousin Otto), it will cross the mind of the viewer that this whole production is like a very long, R-rated SNL skit, and any rare sense of mirth will feel like personal participation in one big dirty joke. You may also feel dumber.

The movie begins with harsh profanity, and that coming from the mouth of a collared preacher who is in the middle of a drinking game-of-chance in the church basement. Later, the sanctuary of an actual church was used to film more bad language and behavior, and I wondered if the real congregation would have agreed to the filmmaker’s use of its facility had it known in advance what would be done there.

Throughout the movie, every imaginable sexual and excretory vulgarity was uttered, along with the typical blasphemous expletives. Many of these were also uttered in German, and the really unfortunate part was seeing someone as awarded and well known as Clorice Leechman talking with such a dirty mouth at her age. She plays Great Gam Gam, matriarch of the American team, and prostitute consort to great-grandfather Ludwig. One would think that such a movie was beneath the more notable performers, but then they are “performers,” and we mustn’t assume that because they may have portrayed good and moral character in other productions that somehow this is because they aspire to such. If anything, one may conclude that actors are only as upright as the parts they play, because every role is a job that they are willing to perform for money, and those in “Beerfest” apparently didn’t mind doing unseemly things to acquire it.

The violent elements are as slapstick and ridiculous as the rest of the film, but they include a beer drowning, human meat-grinding, fighting with weapons, face punching, and off-screen firing squads, to name but a few. Simulated urination, as well as consumption of urine (supposedly from a sheep) made repeat appearances in the film. Flatulation, regurgitation, belching, and every other contingent crudity was also included. Sans the perverted stuff, any elementary age boy would have just loved all the gross, bodily-function humor. Which makes one wonder who it is that constitutes the primary audience that spent some 20 million reported dollars attending this show and buying the miscellaneous “Beerfest” kitsch. I can only imagine that most were likely male teenagers who finally became old enough to see R-rated movies and just couldn’t wait to be titillated and catered to with supposedly “adult” comedy.

At the end of the movie, the team of Americans reconvene in Amsterdam and run into country singer Willie Nelson—who once played Reverend Julian Shay in the western “Red Headed Stranger.” Here he’s no country minister, but the captain of a marijuana-smoking team that enlists the drunkard-five to join him for what the teaser at the finale announces is coming soon—“Potfest.” I understand that such a production is actually under consideration.

Those enamored with America’s current microbrew phenomenon may be tempted to see this topic-particular film, but it isn’t about beer culture as much as it is the abuse of alcohol and the display of sin—to gain box office receipts. Whatever cleverness there may be in this movie is rolling in the gutter, and people of faith will not want to go there. The Bible warns, “Woe to those who are heroes at drinking” (Isa. 5:22 NIV) and instructs Christians to “rid yourselves of …filthy language” (Col 3:8 NIV); “Nor should there be obscenity, foolish talk or coarse joking” (Eph. 5:4 NIV). “Beerfest” clearly falls out of bounds spiritually and morally speaking.

With the release of the DVD, deleted scenes that couldn’t make the cut for an already bad movie are revived, including one that was removed in the UK for especially tasteless content, but which I understand has now been restored. Makes you proud to be an American, doesn’t it? Another added feature is an almost, I say “almost,” worthy educational piece called “Beer 101.” It includes some actual information and history about beer in other cultures through time, illustrated with humorous Monty Python-esque animations. However, similar to the movie (but on a smaller scale), crude and lewd elements are seasoned throughout for tasteless consistency, rendering it likewise unsavory. I would not recommend this production to anyone, Christian or otherwise.

Negative—“Beerfest” is a pretty vile film, and while it’s funny in a juvenile kind of way, it’s no Monty Python revival. I was talked into seeing this movie with some friends from work, and, yes, I admit to laughing a lot. The humor was crude, campy and occasionally clever, but overall that the film comes off as kind of an over the top self-parody. Sadly, this movie—released just in time for freshman orientation across the nation—will probably inspire a death or two surrounding the consistent social ill of binge drinking, which this film dismisses by its very release.
My Ratings: Extremely Offensive / 2

Richard Schmitz, age 50
Negative—I went to see this movie with a group of friends. I was VERY glad my parents didn’t come with us. I did get a few laughs from this movie, but wouldn’t see it again. The only really good thing I can say about the movie is, the Sons were trying to save their family name, and please their dead father. We all should work hard to keep our family name.
My Ratings: Very Offensive / 2