for strong violence, sexuality and language 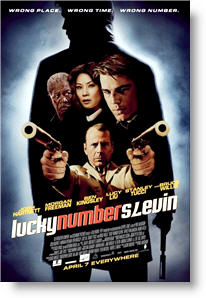 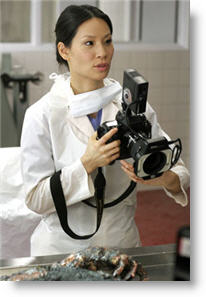 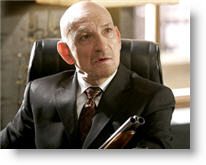 There are two strong sex scenes and intense violence in “Lucky Number Slevin”. That should keep most Christians from viewing this film.

Josh Hartnett plays Slevin, a victim of mistaken identity. Slevin goes to visit his friend Nick Fisher. When Slevin arrives, Nick is nowhere to be found. While at Nick’s apartment, Slevin is visited and taken hostage by two opposing crime fighting families who mistake him for Nick. Having recently been mugged and with no proof of identity, he finds himself between a rock and a hard place. The adorable Lucy Liu plays Nick’s neighbor, Lindsey.

“Lucky Number Sleven” is many things: a comedy, a mystery and a suspense thriller. Writer Jason Smilovic has a gift for witty dialogue and director Paul McGuigan is a great storyteller. The pace of the film is quick and stylish—taking the audience into another world. The film is edgy and very funny.

The premise behind the film is that of revenge. Each family is trying to kill off the other. Somehow, even I was pleased with the end. That shows that either this film was engrossing or that I am easily persuaded to worldly thought. Vengeance belongs to the Lord. That is hard for us to swallow. We have this idea that we have the right, if not the responsibility to punish those that bring harm and pain to our lives. Somehow we think that we find peace when fully avenged. The truth is that we don’t. Adam brought sin into the world. And that one act has led to many sinful acts that have brought death, pain and misery to all mankind.

A true Christian can find his peace in Jesus Christ and his hope in the Second Coming. At that time, true justice will lead and our desire will not to be avenged, but rather to see Christ given the glory and worship He deserves.

Positive
Positive—“Lucky Number Slevin” is an amazingly entertaining film. Critics have said the “twist” is predictable and Paul McGuigan (the director) tried to copy Quentin Tarantino’s style of directing, but I dissage. True, the twist isn’t very suprising, but I don’t think it needs to be. If you figure it out, you can see how certain characters were fooled into beliving it, and if you can’t guess it, you’ll enjoy putting the pieces together. McGuigan certainly has talent and uses violence, humor, and crime in a stylized, fantastical way, much like Tarantino, but it’s more toned down. “Lucky Number Slevin” isn’t as violent or graphic as Tarantino’s films, but fans of “Pulp Fiction” or “Reservoir Dogs” will most likely enjoy this picture. Overall, if you like fun, stylish, violent action movies, and aren’t too easily offended (language, violence, homosexuality, and two fairly tame and very short sex scenes are the most offensive parts), you’ll like “Lucky Number Slevin.”…
My Ratings: Offensive / 5

Caleb, age 34
Positive—As far as the plot I have watched it 3 times and will, when it is in Walmart’s $5 movie section, buy it. As for religious morals, it has none and has excessive killing and foul language. However, if you are like me, you will find it entertaining with its violence almost comical and language used to effectively show the type of person these characters are. This is a movie of a man who seeks to avenge the death of his parents, and if that statement interests you, you will enjoy the twists of the plot. However, if you are so religious you think killing in even movies is wrong, you will find it very offensive. There is a slight love story so for you women out there, something you too will enjoy. My rating is two thumbs up for a movie that has kept my attention all three times and whose principles should be shared by all.
My Ratings: Offensive / 4½

Stephen, age 19
Negative
Negative—AVOID!!! I can’t say this too strongly. Continuous vulgar language, a series of murders including a child, and two pornographic sex scenes—all in the first 20 minutes! My wife and I walked out and were given a refund.
My Ratings: Extremely Offensive / 1

Todd Adams, age 38
Negative—Great Cast! Horrible Movie! Tried to have the twist of “The Usual Suspects” but missed the mark. There was no need what-so-ever for Lucy Liu in the movie; she didn’t add anything to the story at all. Bruce Willis was great, Morgan Freeman great, always good to see Ben Kingsley in a movie, and Josh Whatever was good. The story is stupid. The language offensive, harmless sex scenes in the movie for no reason, and violence for the sake of violence. NO a kid does NOT get shot in the movie, if you stayed long enough to watch it you’d realize the kid is raised by the hitman and returns to avenge his parents 20 years later. Overall, cookie cutter action.
My Ratings: Extremely Offensive / 4

John, age 35
Movie Critics
…When a movie makes it clear that its characters are going through a charade for the amusement of the director (and when the characters themselves make it clear they all but know they are actors in a movie), I get restless: They’re having such a good time with each other, why do they need me? Then when there’s a level of trickery even beyond the apparent foolery—reader, I feel like they’re yanking my chain. …

Roger Ebert, Chicago Sun-Times
…Consider yourself lucky if you roll past this one …

Duane Dudek, The Milwaukee Journal-Sentinel
…an odd but tasty duck… Packed with wry one-liners and sly performances, the caper film defies you not to like it. …

Philip Wuntch, The Dallas Morning News
…We’ve seen it all before… A hyperactive, style-crazed crime caper of revenge and mistaken identity…