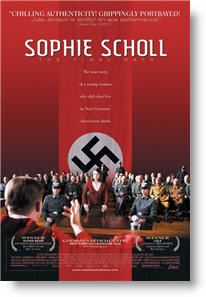 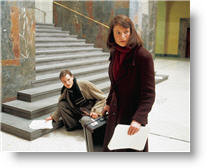 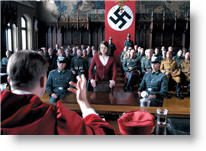 Resurrection of the dead in Christ

Persecuted church—Why and how should we pray for suffering Christians? Answer

“Sophie Scholl: The Final Days” tells the true story of a 21-year-old German woman who, in 1943, dared to rebel against her Nazi-led government and paid the ultimate price. If you feel that last sentence just ruined the whole movie for you, sorry—but the title leaves little room for doubt, and you’re best warned now that the ending will be anything but happy. What’s extraordinary and worth seeing about this film is that we are allowed to watch someone so full of life challenging injustice and willing to embrace her own death. Sophie is able to make this decision with great courage because of her firm faith in Jesus Christ and the promise of resurrection.

Sophie is portrayed by actress Julia Jentsch not as a saint. She loves the popular music of her day, enjoys an occasional cigarette, and is not above lying repeatedly to her captors in order to save herself and protect her friends. She’s engaged to be married, and suicide is not on her agenda. In fact, the film raises several moral questions as Sophie seeks to escape the death penalty for passing out anti-Hitler/anti-war flyers around her university. Such as, “Is there an appropriate time to disobey the law?” and “Would telling the truth cause more harm than good when corrupt men are seeking to do more evil?” Sophie chooses to lay all the blame upon herself and her brother (who confesses first) even though she is promised a lighter sentence if she names the others devoted to their cause.

While watching, I kept asking myself, “What would I do if I was being asked to turn in my friends or my family for doing what I believe is right?” “Would I lie to save myself and others?” “Sophie Scholl” does not provide any easy answers. When all hope is lost for escape, Sophie begins to ask her own questions. She defends her flyer distribution and explains why God’s justice, the protection of innocent life, and one’s personal conscience must supersede when governments use their power unjustly. You may feel the urge to stand up and cheer as you watch her persecutors becoming increasingly uneasy while listening to the truth of her arguments. The director of this film is an atheist, but he decided to use the recently-released transcripts of Sophie’s defense, despite he repeated references to God.

Just hours after Sophie’s confession and a ridiculous, but historically-accurate courtroom trial, she and her brother are dead, and most of the flyers have been collected and destroyed. Some may ask, “Was it worth it?” and “Did their deaths really accomplish anything?”

The answer may only be answered through future generations. As people hear Sophie’s story, perhaps more men and women of great faith will find the strength to stand up on behalf of the helpless and receive punishments they don’t deserve—for the sake of Jesus who went to the cross before them, saying, “Greater love has no one than this, than to lay down one’s life for his friends” (John 15:13).

“Sophie Scholl” is not an easy movie to sit through. You may find yourself on the verge of tears throughout much of it, and it may provoke you to anger as well. It’s a German film, with English subtitles, and I don’t recall any bad language, sexual innuendo, or on-screen violence. There is a powerful scene of off-screen violence, which may shock you and any kids who attend, as it has haunted me for the last few days. Proceed with caution.

Positive—“What would I do if I was in her place?” That was the question I kept on asking myself while watching this movie. Being German myself, I met quite a number of devoted old Christians who participated in the War and served in the German Armed Forces despite knowing that what they did was wrong many times. Nevertheless, I just can’t bring myself to pass judgment on those people, I really don’t know how I would react if my own life or—worse—the lives of my loved ones would be at stake, if I refuse to involve myself.

For young people in Germany and around the world, Sophie Scholl has become a symbol. Not only a symbol of courage and credibility, but also an example of how faith can enable you to stand up against a godless tyranny, even if this will cost your life. The movie definitely has the right choice of actors, Julia Jentsch plays very well, as well as her fellow actors. The actor who met his role best was by far the one who plays Roland Freisler, the evil Head of the Volksgerichtshof, the supreme Nazi Court in those days. Shot in the original places, with no heroisms and no sentimentalities, the movie just shows how Sophie Scholl and her friends awaited the death sentence for what they did, including all the emotional upheaval that one feels before meeting such an end. It also points very strongly to the strength that Sophie got out of her profound faith in Christ. (Even though this movie was directed by an atheist!)

For me, this was one of the most brilliant and accurate movies portraying Life in Germany during those evil times. Pray that they never come back!
My Ratings: Good / 4

Rolf Schwaerzel (Germany), age 35
Positive—This film accurately portrays the Christian convictions of a young lady. Julia Dentsch wonderfully captures the indomitable will of Sophie to follow through on her actions despite the grave danger. It is borne from Sophie’s belief in verses such as “If you are not for me, you are opposed to me” and ultimately her belief that by not following her conscience she is disobeying God and will risk eternal separation. It is a conscience grown and nurtured over time and through persistence, and Dentsch’s interrogation with Mohr that reveals her true nature.
My Ratings: Moral rating: Excellent! / Moviemaking quality: 4½