You, Me and Dupree 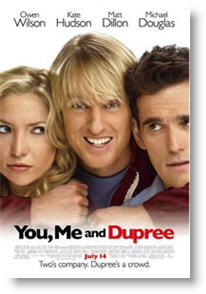 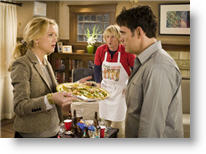 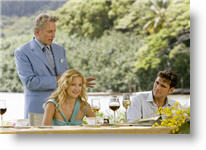 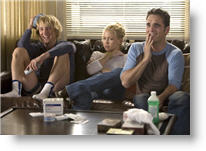 To say that the story behind “You, Me and Dupree” is about one specific thing, would be near to impossible.

It’s being sold as a movie about a sweet, stable, newlywed couple who suddenly find themselves in the position of having to allow an irresponsible friend move in, thus paving the way for comedic mayhem. And, I guess it is that, to a degree…

But it is also the story of a marriage. What it takes to build one—the work it takes to keep one. What a spouse is required to give of himself, of his time…

It is a story about friendship. What it can, and will, endure. What it means to be a faithful friend…

It’s a story about learning to see past the surface. About not judging a situation, or a person, by appearance, but instead truly taking time to get to know the truth.

The film opens on the coast of Hawaii just before Carl (Matt Dillon) and Molly “tie the knot.” Enter Carl’s best friend Randolph Dupree (Owen Wilson), who is the fun guy… the one that everyone sees as the irresponsible screw up who only successfully manages to be the life of the party. Dupree is so seemingly focused on himself (and himself alone) that he laughs heartily as Carl’s soon-to-be father-in-law (Michael Douglas) makes jokes at Carl’s expense, and later allows himself to move in and drastically dampen the lives of the two newlyweds.

Dupree very quickly becomes a source of tension between the newly married Carl and Molly (having just returned from their honeymoon), and things continue to go from bad to worse. Complicating the situation further, Carl’s boss Mr. Thompson is also Molly’s father. Mr. Thompson would rather his only daughter not be Carl’s wife, and he takes steps to try and drive a wedge between them and intimidate Carl—thus making Carl’s life even more stressful.

Surprisingly, what we have with this film is a story with a lot of heart… It is beautifully-crafted, well acted, funny, yet touching. A movie for couples to snuggle up to, or girl friends to laugh through and later chat about over coffee. It isn’t perfect; but it isn’t predictable. It isn’t entirely original, but it is not tired and well worn either. It works… the dynamics of the film are strong enough to make the lines of people waiting to be seated, later leave the theatre dancing as the credits roll. The script is clever and tight, giving those of us who obsessively quote movies, much to repeat and laugh at again and again. It’s a well known fact that laughing releases endorphins and that is why “You, Me and Dupree” will be one of those “feel good movies” that some people won’t feel bad about paying to see again and again.

As I mentioned though, it isn’t perfect… It is rightly rated PG-13. It is full of objectionable content, yet those objectionable things are touched on surfacely—to maintain that lower rating. I would encourage parents to examine reviews like this one, as well as others, before allowing their middle school and early high schoolers see it. Due to the dialogue and content, it is my opinion that it would be best for a mature teen/adult, and definitely no younger than 13… Parents with 13-16 year olds who wish to see the film, might consider seeing it with them. There is much to laugh at together, and great opportunities for discussion later.

Sex/Nudity: Though there is no complete nudity, there are a few scenes where Molly is dressed in lingerie or underwear. There is one instance, during a fantasy scene, where Molly is in a rather skimpy bikini.

There are several instances of dialogue where the subject of sex, or “love making” is broached. There is a brief scene where two strippers show up at the front door claiming they heard some “bad boys” were there. In one scene, though it isn’t exactly shown, it is blatantly indicated that Dupree was “discovered” spreading butter on a woman he was being physically intimate with. Through a conversation later, a woman is portrayed as a “slut,” and it’s implied that she is having sexual relations with an entire faculty of men.

Though the focus of this movie is the institution of marriage, regardless of how accurately or positively it seems to portray marriage, there is a common thread of lightheartedness when it comes to sex, intimacy and the relationship between a man and woman.

There is another friend of Dupree and Carl’s who is very unhappily married and whenever his character has an appearance in the film he is bad mouthing marriage or, in one instance, stealing a bunch of pornographic video tapes from Carl.

There is also a scene in which the character of Carl looks at a pamphlet which has a diagram/drawing of a penis and the male reproductive system. There was nothing over the top or crude about this moment, but I felt it was worth mentioning as this is a PG-13 movie and parents have a right to know exactly what it is their kids might be seeing.

Language: Though not as heavy as some movies of this rating, there is strong language periodically throughout the film. This does include a few instances of taking the Lord’s name in vain. There is, at times, constant dialogue centered around the topic of sex and pornography. (Some instances of this are factual, but others are handled more crudely.)

Violence: There is a scene where the two male character’s are injured while “showing off” their skateboarding skills, and another instance where a character is hit by a car. Both situations were done in humor and are well executed and comical. Hopefully, most people watching and laughing are mature enough to realize that in real life, these situations would have more than likely caused more harm than laughter.

There is a background scene where two boys are seen fist-fighting in the street. In one instance, one of the character’s attempts to strangle another, and is later hit over the head with a candlestick. A bit later this is followed by a series of scenes involving a chase, some fighting and traditional, low-key comedic pursuit violence.

Personally, I thought there was much to like about this movie. More to laugh at, and sadly much to be cautioned by. Despite it’s worst though, I found “You, Me and Dupree” enjoyable.

Positive
Positive—It was very funny. There were not any fall out of your seat laughing moments, but, in it’s entirety, it was consistently funny. The story had dirty moments, but so does every movie. Owen Wilson carried the movie along as the lovable goober with good intentions. I would recommend this movie to people who are not easily offended by crude humor, because there is quite a bit. If you cannot get over the fact that it is a crude comedy aimed at bringing in money, like so many PG-13 comedies are these days, then you will miss the main point of the movie—marriage is a covenant which survives through thick-and-thin, and a true friend will always be at your side ready to support you no matter what the world throws at you.
My Ratings: Average / 3

Zorro, age 50
Positive—Great movie! For Adults! Owen Wilson put on a great show as always. The quality of the film was okay, but Owen made it funny. …
My Ratings: Average / 3

Debbie, age 31
Negative
Negative—The movies was so offensive that my wife and I walked out of the movie. I cannot imagine a Christian who would not be highly offended by this movie.
My Ratings: Extremely Offensive / 3

Kristen, age 18
Comments from young people
Positive—This was a really funny original movie. Owen Wilson did a great job in this film. I recommend this movie to everyone, except young children.
My Ratings: Average / 4