for violence, disturbing images, some sexual content and nudity 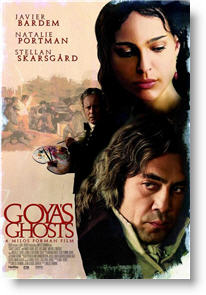 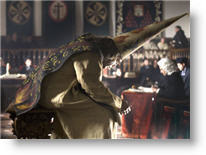 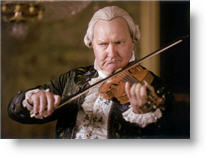 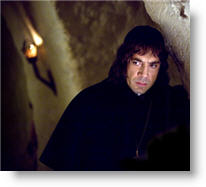 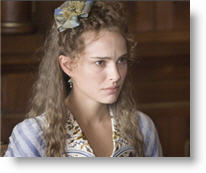 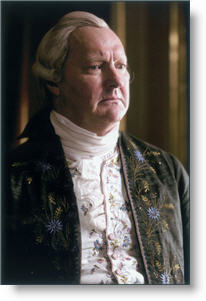 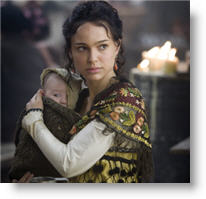 Questions and answers about Roman Catholicism

Kings of the Bible

“Tell me what the truth is”

“Goya’s Ghosts” is a serious movie whose poorly written story line and occasional sordid moments obliterate its message. Although one might expect secular critics to warm to a film by a famous director, Milos Forman (Amadeus), which is both anti-church and anti-war, there is a fundamental truth in the movie which doesn’t permit a propagandistic celebration. More on that below.

Formally, the movie’s cinematography is beautiful, the acting, for the most part, is expert, the period settings and costumes are convincing, and the direction is unobtrusive if not brilliant. The movie’s great flaw is the writing. The story is incoherent in terms of its emphasis. The audience is not sure if it is watching a movie about Goya, the Spanish Inquisition, or the French invasion. This lack of clarity in focus creates a moral vacuum which seems to treat every subject with equal importance.

The nudity is a problem for Christian audiences but, if one may make such distinctions, the nudity is not explicitly sexual in nature, is not gratuitous in its usage, and is ultimately not attractive because of the degradation of the character. For example, there are no frontal or rear shots of Portman; she is always shot from the side to convey the idea but not to gratify prurience.

The movie tells the story of the great Spanish artist Francisco de Goya (Stellan Skarsgård) and chronicles roughly 15 years of his life. This period comprises the Spanish Inquisition and the occupation of the brutal French revolutionary army. We see Goya during the height of his popularity earning commissions from businessmen, the Church, and the King and Queen. “Goya’s Ghosts” represents the subjects of his paintings and, metaphorically, can be said to represent Spain during a time when people disappeared into the Inquisition dungeons or were slaughtered by the Mameluks, Muslim calvary hired by Napoleon to terrorize and cow the Spanish population.

The main storyline concerns a monk, Lorenzo (Javier Bardem), who assists in the administration of the Inquisition but appears to be an otherwise restrained individual. He is vain, as demonstrated by the life-sized portrait of himself he commissions Goya to do; he is proud, as evidenced by his insistence on the impossibility of his ever renouncing his faith under any circumstances; and he is carnal, as demonstrated by his love of money and his (implied) rape of Ines (Natalie Portman). This character represents the central theme of the movie since he is shown being, both, a representative of the Church and of Napoleon’s occupying revolutionary army, the twin ideological poles of the film.

In focusing on the Inquisition or on the faulty formal elements of the movie, every critic I have read has missed the central idea of the movie that Forman is trying to communicate. As a Jew who lived through both the National Socialist terrors of the Nazis and through the subsequent International Socialist terrors of the Communists, Forman reduces the Spanish suffering under totalitarian regimes to a single metaphor: “the Question.” When Lorenzo informs Ines’ father that she has been put to “the Question” the father’s reaction is initially controlled but then builds to a chilling climax. When the father appeals through Lorenzo to the Cardinal to free her, the Cardinal indifferently responds that her failure when put to “the Question” is irrefutable proof of her guilt. When the father protests to the King and Queen about the absurdity of putting a gentile, teen-age girl to “the Question” and provides proof of Lorenzo’s failure to endure it himself, the King merely laughs.

The question, then, is what does “the Question” represent? Physically, it is a torture which consists of suspending the victim from the ceiling by a rope which binds the person’s hands behind his back thus putting horrific strain on the muscles and ligaments that keep the arms in their sockets. Ideologically, it shows no favorites; everyone succumbs to it. One would have to have great faith or an inhuman intolerance to pain to suffer in such a manner and not renounce or affirm anything the torturer requested. The choice for the falsely accused victim is either to allow one’s arms to be ripped from their sockets or admit to being a heretic. Not many are able to choose crippling over disgrace.

My suggestion here is that Forman, as an anti-totalitarian non-Christian, sees life in a classically existentialist mode: 1) life doesn’t make sense, 2) the source of evil is human institutions, and 3) the existential question of “Why is there suffering?” has no answer. The Church tortures the sheep for whom it is responsible, while the revolutionary armies who promise liberty from the Church and the King kill far more people than both combined. As Lorenzo in full-blown revolutionary fervor proclaims: “Those who refuse to see the light of liberty shall receive no mercy.”

The second most important metaphor in the movie is that of “whore.” One of the characters is a prostitute which prompts an angry exchange between the monk and Goya, each of whom accuses the other of being an ideological “whore.” Lorenzo accuses Goya of taking money from the King, from the Church, and from anyone who can pay him. It is a weak accusation since, in taking money from those groups, Goya remains faithful to an honest art and does all he can to help people in need. However, Lorenzo progresses from a weak and venal monk who did limited harm, to a corrupt atheistic bureaucrat who did great harm and is proud of having read Voltaire and Rousseau. He is like the Bible shown early in the film which says “Holy Bible” on its cover and contains the text of Voltaire inside. On the surface Lorenzo was employed by the Church and appeared be a Christian, but inside he proved that he was merely an opportunist and would compromise any principle for the love of mon ey, the true “whore” of the story.

Ultimately, the movie portrays the godlessness of the French revolutionary forces as being worse than the Church. The Bishop offers clemency to Lorenzo and gives him several opportunities to repent and be spared execution. Lorenzo refuses. Nonetheless, even a corrupt Church is shown as having the mercy that the atheistic and liberty-loving Lorenzo refuses to extend to his enemies.

Finally, secularists cite the Spanish Inquisition as a time of horrific persecution. In reality, even liberal critics of the church acknowledge that, at most, an estimated 3,000 “5,000 people were burned at the stake over a period of more than 300 years, from 1478 when it was established, to 1813 when it was abolished, with the vast majority of those deaths taking place between 1480 and 1530. The movie begins in 1792, so the Inquisition at that time is itself only a ghost of what it had been 250 years earlier when Spanish Catholic fears of Muslim invaders, Jewish financiers, and Protestants had induced the hysteria of the Inquisition. Three thousand people burned is indeed horrific, but it pales in comparison to what the French atheists did in a single city. According to Michael Glover, author of The Peninsular War 1807-1814 (Penguin, 89), in Saragossa on February 20th, 1809, “the French left behind burnt-out ruins filled with 64,000 corpses.” It would have taken the Inquisition more than six thousand years to kill as many people as the freedom-loving French did in two months.

So, if you see the movie (which I can’t recommend), watch it with an eye on “the Question.” Although human life is at time wasted in grotesque and inexplicable persecutions, wars, and natural disasters, the “Question” of its existential pain is still and always will be satisfied by the answer of Jesus: “I am the way and the truth and the life.” Such an answer refutes the love of money, the love of power, and the love of carnality shown in the movie with God’s love of his creation and his people.

Positive—What a beatiful movie! Wonderful acting from all the actors. Portman especially played her part well.
My Ratings: Average / 4½

John, age 20
Neutral—I had never heard of this film until it was advertised a few days before its release on DVD, and I was curious about its take on the Spanish Inquisition, so I rented it without high expectations. “Goya’s Ghosts” is an obscure and self-contained little film that seems meaningful even though it overlaps such a tremendous amount of history. It’s not a masterpiece, but nor am I likely to forget it anytime soon.
This time period has been so ignored by film that it’s a delight to look into the cultural and religious happenings of Spain during those tumultuous and often horrible years, when first the common people were oppressed by the church and then by the French. Probably what is the most impacting, however, are the performances from a truly magnificent cast. The script deals with some very harsh and serious topics, and some audiences may find it depressing, but somehow it never manages to be dull. It’s a movie that is not for young audiences, and the partial nudity does put a damper on it, but for fans of the historical changes of the era, will be an eye-opening visual experience.
My Ratings: Moral rating: Offensive / Moviemaking quality: 4