for strong grisly violent content and some language/sexual references 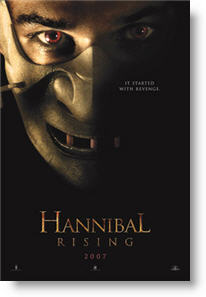 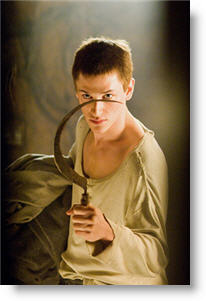 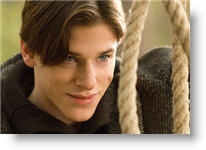 “It started with revenge.”

Why? Why? “Why” is the question motivating people to see this. Why is Hannibal the way he is? What is his side of the story? Needless to say, we can all guess what parts of his life have included.

From the very beginning, Hannibal and his family are alone during the war, and are seized by Nazis. Shortly after, the Nazis are killed, leaving Hannibal and his younger sister Mischa at home alone during the winter. Of course, their peace-at-home is broken when Russians invade the home, looking to stay alive, having lost all other allies. When food runs short and the freeze kills vegetation and even solidifies the bodies of other soldiers outside, the Russians need food. It’s either starve or survive. So who do they turn to for food? The children: Hannibal and Mischa. Hannibal escapes. Mischa is not so lucky.

Hannibal, now a young adult or older teenager (never specified), is later placed in a reform school (more like a camp) run by Russians. Hannibal, we discover, hardly talks, and has nightmare visions of the experience he had as a child. He escapes and finds refuge in his widowed aunt’s mansion in France, and so begins his journey of revenge that will take him to his original home, to medical school, and to Canada: to track down each and every Russian involved in the murder and slaughter of his younger sister. While the movie can be seen as a tale of revenge, it does show what began Hannibal’s streak of insanity and monstrousness.

For a movie of such ominous caliber, the violence is not extreme, but feels that way. In the beginning are the typical war scenes: intruding soldiers, bombs, tanks, etc. It is nothing that “Saving Private Ryan” hasn’t seen, and not even as gruesome. However, so comes the survive-or-die tactics of the Russians, as they all turn to Mischa, hatchet in hand, knowing what to do. The implications of these scenes is extremely graphic; no child-killing is shown, however we all know where Mischa is going as she steps out the door into the front lawn with the men.

For a movie so long, there are really only few long scenes of gruesome violence, including rope-chokes, stitches in the thumb, brutal sword-slashes and stabs, war-violence, and severed heads (implications of what happened). And as far as cannibalism itself, Hannibal is seen taking one bite out of a person’s face in his ballistic rage. The movie is, rather than a blood bath, extremely intense, psychologically heavy, and very tense even for the audience, as in any word Hannibal says, we can see has an undercurrent of rage and vengeance, and no amount of true heroism. The movie, while portraying Hannibal as protagonist, really has no “hero,” unless Hannibal’s widowed aunt (who is a very minor accomplice to Hannibal, trying to keep him safe) counts.

For a movie that focuses so hard on the intense, rage-filled mind of a monstrous killer, there is no sex; if anything, it is just implied in the circumstances. A few Russians are seen running what looks like a boat-house brothel, where women serve, are beaten, are used as toys. Hannibal himself comes very close to a sexual relationship, but this is cut off immediately and never referred to again. However, some of the sexuality lays in the language, as some of Hannibal’s adversaries use very foul language to antagonize Hannibal and his widowed aunt.

The spirit behind the movie is dark, intense, and psychologically terrifying. Every time someone crosses Hannibal, we can feel that Hannibal will certainly get his revenge, and not so cleanly, either. Revenge and hate is so powerful, that the movie adds extreme tension to the audience. I came out of the theatre with a slight headache and feeling very irritated and intense. The spirit is troubling. While inside us humans, we can say “Hannibal’s enemies got what they deserve,” we still cannot look at Hannibal as some kind of hero, as some kind of rescuer or memory-keeper of his young sister Mischa. The movie is driven by rage, blood lust, revenge, and hate.

Everyone has their story. And as much as Hollywood tries to turn every personality into a caricature, Christians need to be considerate of all points of view, all circumstances, all pasts, etc. We cannot judge a person for where they are now just because they’re maniacal or insane; we cannot be so quick to vilify. We can hate their actions, we can hate what they do, but the story surrounding that person and the person themselves should never be at the mercy of our judgment. Hannibal himself, though, betrays this ideal, simply stating that he could never forgive. He would kill the Russians, now 10 years later, who have families, or run their own business, and have left that war life behind them. He would be the polar opposite of a Christian at the moral level: he is wrathful, hateful, vengeful, and most of all: unforgiving. As humans, our “judgment” on other people is merely punishment, vengeance, ignorance, or any slew of unjust human emotions based on rocky foundations, for we don’t know every human’s heart. Only God does, and only he can see into the heart so clearly as to make a certain judgment.

In my opinion, the movie is not worth watching for those who would neither be able to take much violence or even mental burden. For Christians, the movie may not be very tasteful. All-in-all, the movie makes sense: it has good quality, the acting is superb, and in context—it all works out. However, for Christians, the movie may be far less than acceptable for someone looking not to indulge in rage or violence or mind twists. Implied child-deaths and torturous punishment laid on by Hannibal may be too much for someone’s mind to bear.

Bottom Line: The movie, as part of the Hannibal series, is a good one. It delivers the side of the big bad wolf, answering some of our deepest questions about why people do what they do. And in-context, every aspect of the movie is okay. However, its violence, its psychological pressure, and disturbing spirit can prove to be more than horrendous for a Christian to view. Just ask: Would Jesus see this movie with you?

Positive
Positive—Book was great. Definitely will watch the movie again. It showed you who he was as a child, and his point of view of how he grew up.
My Ratings: Average / 5

Heather Hyndman, age 32
Positive—A truly amazing film. This is not offensive at all in my eyes!
My Ratings: Excellent! / 5

Mark Torch, age 18
Neutral
Neutral—I had read the novel and seen the other Hannibal Lector films before viewing this one. I was expecting far more gore and inappropriate content. While both are present, I would say that this movie was not as grotestque as “Hannibal,” which was directed by Ridley Scott but it still contains violence and gore, especially at the end of the movie when hatred and revenge have completely consumed Hannibal. We see the right choice offered to Hannibal multiple times by two people, who have also lost everything dear to them, but we all know from the latter films that Hannibal makes the wrong decision.

As for nudity/sex, the movie contained no nudity and all things sexual were mostly lewd comments involving genitals. Once towards a woman and twice towards men, all using slang. The novel had a moment when Hannibal saw his late uncle’s wife, Lady Murasaki nude in the bath but this is omitted from the movie. Instead, it shows a moment when she and Hannibal are alone. They kiss but nothing further happens, although their desire for one another is evident throughout the movie. One of the men that Hannibal seeks revenge against sells women and has one wait on him as he bathes but she wears a slip. Later, this man attacks Lady Murasaki in a sexual way to upset Hannibal. He kisses her and attempts to reach under her dress, something much worse is possibly implied but not explicit.

As for profanity, the f-word is used four times, a word for a fatherless child once, and a “mild” profanity once that I counted. There is also slang three times for genitalia, as mentioned above.

Some Christians may be offended by the presentation of religious people in this film. One man, who has a hand in telling the Nazis where Jewish children are hidden, desperately wants his crucifix necklace before his execution. Also, one of the men who Hannibal seeks revenge against for murder, is religious. He arrives with his family at a restaurant dressed for church. He mentions that they are going to church and tells the children to pick offerings from his palm to give at church. This is a bit odd but present in the novel. I suppose it goes to show that there are wolves among the flock. Ancestor worship is also present as Lady Murasaki prays to her ancestors and Hannibal is later shown doing the same with a photo of his parents.

Violence is the main concern in this film, which everyone is aware of. Violence toward children that includes cannibalism is present but is implied, rather than shown. I actually thought it might be toned down after viewing the beginning film but as it progresses, so does the violence, becoming gorier with each victim. Hannibal displays the heads of his victims after learning that the samurai did this, and the cheeks are also missing, showing that Hannibal has adopted the cannibalism of his childhood persecutors, who he hunts down throughout the film. Some of these murders involve stabbing, strangling, and drowning. The worst by far is at the end of film and involves mutilation and cannibalism. Up to this point, the act of cannibalism was implied, not shown, but it is very disturbingly and graphically shown with the last victim.
My Ratings: Very Offensive / 3

Melissa, age 25
Negative
Negative—“Hannibal Rising” was a big waste of huge potential. I was expecting another gem from the Hannibal Lector series, not bad acting and a poorly developed, anti-climactic film. The idea behind the film was good, but I don’t think it was carried out very well. The movie is overall very dark and violent (as can be expected with a Hannibal movie), but there isn’t too much profanity. The sexuality is minimal: there is no nudity or sex scenes, but there are a few innapropriate references (PG-13). Don’t waste your money at the theaters for this one.
My Ratings: Very Offensive / 2

Mike, age 22
Negative—This film was a big flop as far as the Hannibal Lecter series goes. They had a good idea, but it was ruined by exceptionally bad acting and lack of a satifying ending. There was little profanity and a few sexual references (PG-13). The film was overshadowed with darkness and rather severe acts of violence and murder. There was no redemptive qualities and no characters you could really connect with. Don’t waste your money on this one.
My Ratings: Very Offensive / 2½

Race, age 22
Comments from young people
Positive—I will keep this review brief: “Hannibal Rising” made me feel sick. The violence itself is not horrible (although you do see Hannibal take a chunk out of a man’s cheek as he screams), but the whole aspect of his revenge is just evil. He usually tortures his victims for information before killing them in horrible ways (his second victim is tied to a tree and slowly strangled until his eyes pop out (the camera shifts away at the last moment).
My Ratings: Moral rating: Very Offensive / Moviemaking quality: 3½