The Hills Have Eyes II

for prolonged sequences of strong gruesome horror violence and gore, a rape and language 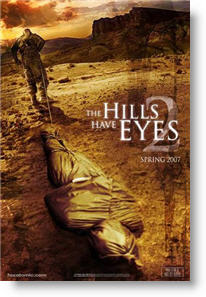 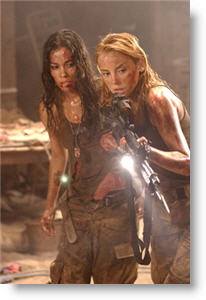 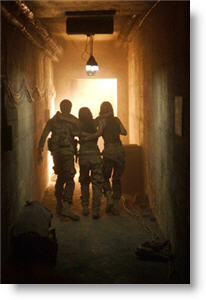 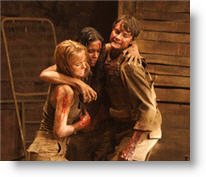 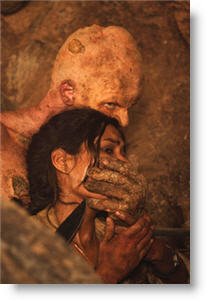 “The lucky ones die fast”

Some horror movies spawn great, original sequels. “Alien” is the first to come to mind. Some horror movies are just so profitable that un-original, boring sequels will follow for years until the audience catches on and just stops showing up. This will probably be the case for what will most likely become “The Hills Have Eyes” franchise. While “The Hills Have Eyes II” was hardly as awful as some past horror films, such as “The Covenant,” it was certainly not a joy to sit through. From the mediocre acting to the virtually non-existent plot to the predictable gore scenes, it was irritatingly average. And it’s a shame, considering that “The Hills Have Eyes” was a very artistically sound horror film, gritty and tense. “The Hills Have Eyes II,” on the other hand, was an un-inspired mess of a movie, with the National Guard turning their assignment into a “rescue mission” as an excuse for a plot. Yes, it really was that bad. I won’t even bother to explain further, as one or two more words could ruin the “sub-plot” for those unfortunate enough to have to sit through this.

“The Hills Have Eyes II” even attempted to borrow from the idea of the infinitely better “The Descent,” by making much of the movie take place in a darkened mine. Except instead of making the darkness and claustrophobic atmosphere work in the film’s favor, the makers of this film just turned off the lights and hoped for the best. Bad idea.

Now for the content… extreme in every way. First is obviously the violence, which borders on excruciating at times, and is very exploitative by any standard. The scene in which a man was pulled through a hole in the rocks by a mutant, resulting in his bones crunching and blood flowing as he is contorted into the small space made me wince. The same goes for the opening scene in which a baby is ripped out of a woman during childbirth. Stabbing, dismemberment, and lots of blood follow. I’ll spare the details, as they really aren’t necessary and would most likely disturb many readers. Suffice to say, it’s disgusting on every level. While the amount of violence is less than the first movie, the brutality remains intact for this one.

Sexual content was also disturbing, as a woman is raped by a disgusting mutant. While the audience is not forced to see the entire act in a overtly graphic fashion, they will certainly get the idea from the scene as it is shown. Another disturbing element involved the opening scene, in which a topless woman was having her child, and was “helped” by a mutant who was ripping the child out of her. The mixture of what appeared to be intentional eroticism and violence was unsettling. And on a much lesser note, sexual joking is present. But the audience will hardly remember it after witnessing the aforementioned scenes.

Language is very pervasive and strong. One will lose count after the first few scenes, as almost every word that anybody would find offensive was found, and the stronger words, particularly the f-word, were used in nearly every scene.

Spiritual ideas and comments are few and far between, slightly less than in the first, but still present. The first film seemed to enjoy taking swipes at either God or those who the film deemed naive for believing, as people would pray and show faith, yet still be slaughtered. In “The Hills Have Eyes II,” God is referenced by one character as not even being aware of their location, in contrast to the Christian concept of God being aware of and involved with everything. While the concept of God in “The Hills Have Eyes” toed the line between Him being non-existent to just sadistic, the concept of God in “The Hills Have Eyes II” is one of Him just being aloof. Aside from these vague references to God, He really is not given much consideration in either movie, especially the second. It’s safe to say that the God of Christianity is probably better not referenced at all in these films, given that this series views Him in a nearly opposite light of a Biblical view.

So, in closing, this movie is a waste of time, mediocre in every aspect. A major let-down for horror fans who enjoy some aspect of art or atmosphere in their movies, and probably too disgusting for any non-horror fans to watch. While the first film was an artistic, yet brutal, film with a statement to make, the audience will realize ten minutes into this movie that the only reason for its existence is revenue. Once the credits roll, audience members forced to sit through this brutal mess will probably even wish they had gone to see “TMNT” rather than this excuse for a movie. And this is coming from someone who cringes at the phrase “cowabunga.”

See our review page on the prequel to this film: “The Hills Have Eyes”

Comments from young people
Negative—I liked the original (remake) of THE HILLS HAVE EYES; if you could get past the content, then you were in for a very well-made thrill ride from one of my favorite modern directors, Alexandre Aja, a man who has seemingly an infinite amount of talent when it comes to filmmaking. But this worthless, vile piece of garbage THE HILLS HAVE EYES 2 is none of that. Mindlessly gory and poorly made, this dribble in a total sack of trash. Its not even worth the bandwidth is takes up, and that’s before you get to the content. I wouldn’t recommend this film to anyone, for artistic merit (or lack of, in all actuality) or moral standing. Beware!
My Ratings: Extremely Offensive / 1½

Josh, age 14
Comments from non-viewers
I have not seen the second Hills have eyes, but I saw enough of the first film to tell people not to have anything to do with these films. The first 20 minutes of the first film made me sick to my stomach. These films are disgusting and have heavy demonic influences! As Christians, we should fill our minds with the things of God and not horrific and vile content like these movies have. As a Christian, I would advise NOT to see this film, and if you do just be aware of the filth you will encounter!
My Ratings: Extremely Offensive / 1