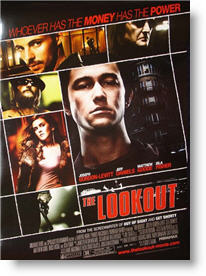 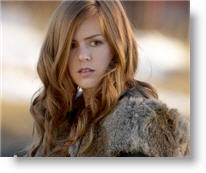 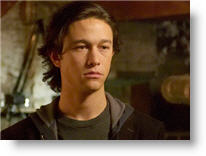 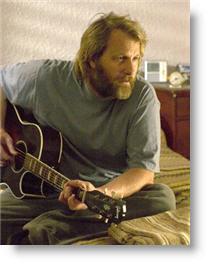 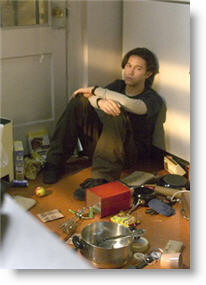 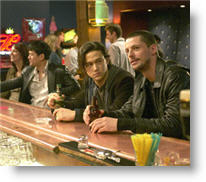 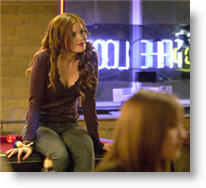 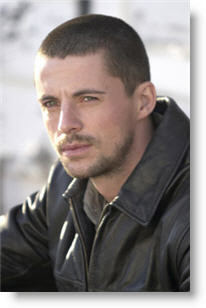 Stealing in the Bible

“Whoever has the money has the power.”

Scott Frank has spent a career creating characters in high concept, intelligent-minded action films such as “Out of Sight,” “Get Shorty” and “Minority Report.” In “The Lookout” he takes on the duties of directing the script he penned.

We meet Chris Pratt (Joseph Gordon-Levitt, “Mysterious Skin”, “Brick”) a high-school hockey phenom, racing down a Kansas highway with his girlfriend at his side and two friends leaning out the back of his convertible. He turns off the lights to take in the glow of the nighttime fireflies and ends up barreling his car into the side of a broken down combine.

Years later, he is picking up the pieces of his shattered life, writing daily journals and learning how to do basic tasks in a life-skills training school. Helping him to adapt is the colorful and blind Lewis (Jeff Daniels), his roommate. By night, Chris works as a janitor at a small town bank that holds the limited earnings of rural farmers.

One night while at a local bar, he is approached by Gary Spargo who claims to know him from high-school and engages Chris in a conversation mostly spent reminiscing Chris’ glory days on the ice before his accident. It is obvious to all that are around Chris and knew him, that he was at the top of his game in high school and lost more than just some mental facilities in the crash.

Gary befriends Chris and introduces him to Luvlee Lemon, a former “dancer,” who appears to take an interest in Chris. After being invited to their hang-out for a post Thanksgiving get-together, Chris is introduced to Gary’s group of shady characters, all of whom seem to be sympathetic to Chris. Amongst the group is a dark figure who never speaks, wears dark sunglasses and lingers in the shadows. He simply answers to “Bone,” and with his inclusion in the group we know, and Chris suspects, something is amiss.

The subplot involves Chris’ dependent role with his well-off parents, particularly the estranged relationship with his father. This relationship is manipulated by Gary and his cohorts to seduce Chris into the true reason they have befriended him. As the night janitor of the bank, he makes the perfect lookout for their planned heist, during a time when the bank’s vaults are plentiful from the farmers’ harvests.

Like former characters in previous scripts by Frank “The Lookout” is filled with witty, fast-talking and fully realized characters. Pratt is a well-rounded character who we empathize with, while still feeling the sense of shame that he has brought upon himself. The secondary characters such as Deputy Ted, who brings Chris doughnuts every night while on patrol, and his co-workers at the bank are not mere cut out characters, but play an integral part in the movie’s plot.

The portrayals in the film, particularly by Levitt and Daniels bring balance to characters that could easily fall into the realm of forced sympathy. Each character, even the bad ones, has a depth beyond the standard fare of action-heist movies.

The film is rather moderate in sexuality and nudity, mostly due to the little time devoted to the love interest between Pratt and Luvlee; this is from a natural development of the plot and is in no ways contrived. There is a very brief glimpse of nudity where the back sides of Gary and his girlfriend are seen, and there is an implication of a sexual relationship between Pratt and Luvlee, but nothing is ever seen.

The violence is pretty typical for this genre of action-heist films. One character is shot by Bone, in a rather graphic manner, but most of the killings take place out of frame. There are flashbacks that show the sight of the initial crash from the P.O.V. of a helicopter. There are also brief glimpses of Chris’ bloody face from the accident.

Also typical of this genre, the film is loaded with profanity as each character seems to favor various forms of the f-word. Lewis’ character, though never bitter, does have a bit of a mean streak; what he lacks in sight, he makes up for in colorful language and a rather vivid sense of humor that he is not ashamed to share with anyone in ear shot.

Film-goers that have enjoyed the films’ that Scott Frank has previously written will not be disappointed by this film, as Frank has delivered a very solid movie in his transition into directing. Those who are accustomed to the level of violence and profanity in a typical crime-action genre film will be no more or less offended by “The Lookout”.

Positive—Your review of this movie is excellent and pinpoints the strengths of this film very well. This movie is not for the sqeamish, since the violence, albeit brief, is brutal. The screenplay, I suppose, must get credit for the way the story unfolds. There are no missing pieces. We understand exactly what is going on. Very unusual movie, touching on some out of the ordinary themes, like brain damage and the need to forgive onself. Excellent piece of filmmaking.
My Ratings: Offensive / 5

Halyna Barannik, age 61
Positive—Better then most films of this genre. “The Lookout” actually takes time to develop its characters and plot. Not an action movie, some might consider it a bit slow. As it is R-rated, the content is adult with language, sexuality and violence, though nothing like the copious amounts in movies like “The Departed.” The story and characters are believable. Levitt and Daniels are convincing, and it was rewarding to see a heist film without a preposterous plot and ending.
My Ratings: Offensive / 3½

Todd Adams, age 39
Positive—I really enjoyed this film. It was one of those unique films that could appeal to younger 20-30 somethings because of the ages of the actors, and their personalities, but also appeal to a little older audience (like me), that like a well-paced intelligent thriller. The script is very well written and does fully develop all of the characters esp. the lead Charlie, who will not be as unknown after this great performance. Jeff Daniels is also great as Charlie’s mentor and friend. You really believe what they’re going thru and feel very sympathetic for them, esp. Charlie-even when He makes bad choices, and is He really responsible for these? ***SPOILER*** it really examines the world of a brain damaged young man very well, who only has faint memories of who He was, and wanders who He would be if fate was different. The bank heist to me was really more of a sub-plot to Charlie discovering who He really is NOW. Without the several f-words and sexual references which we’re all pretty unnecessary, this could have easily been PG-13 and appealed to a wider audience that I think would be touched by a very moving and sensitive story clothed in a rather rough exterior! Great film! Highly recommended for those adults not easily offended, and wanting to be rewarded with an intelligent thriller for once.
My Ratings: Offensive / 4½

David Momberg, age 45
Negative—My wife and I walked out of this movie. …It has a lot more sexual content than the review tells about. As a man who fights to remain pure, I didn’t want to see or hear what I did in this movie. In addition to the content, the movie was boring (at least the first half was). It wasn’t worth the price of admission.
My Ratings: Very Offensive / 2½