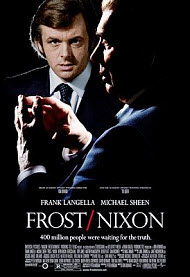 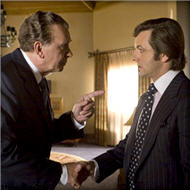 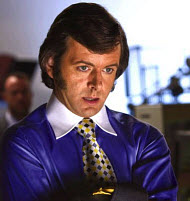 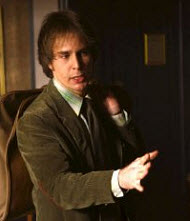 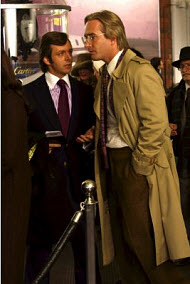 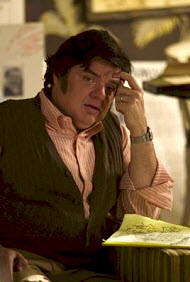 “400 million people were waiting for the truth.”

Richard Nixon was an iconic figure in the 1970’s, and his time as President of the United States was marked by scandal, cover up, and blatant abuse of power. Instead of facing trial or impeachment for his actions, Nixon resigned as President and received a full pardon from then President Gerald Ford. Nixon became known as “tricky Dick” because of his ability to manipulate conversations and provide plausible explanations for any action taken.

In 1977, British talk show host David Frost sat down for four 90 minute interviews with former President Nixon. These interviews were groundbreaking for several reasons. For one, it was the first televised interview of its kind, in the fact that it wasn’t bought by a network, but shot in syndication and then sold. More importantly, it was America’s chance to finally see their former leader at a place of vulnerability, a place where Nixon publicly showed remorse for his actions in the White House.

“Frost/Nixon” is a film by Ron Howard based on those 1977 interviews and the events leading to them. And while that may sound like a somewhat dry topic for a film, “Frost/Nixon” is easily one of the more suspenseful and thought-provoking films of 2008. The movie is more or less an intellectual boxing match, and as the two opponents trade verbal blows, the tension continues to mount toward a riveting climax. The film successfully depicts Nixon as a smart, cunning man who relishes the opportunity to showcase his wit and intelligence. It also depicts a man who is haunted by his past, and his hidden desire to rid himself of the burden of hiding the truth.

Almost as interesting as Nixon is the character of David Frost. A successful variety show host in England and Australia, Frost understands the power of television, and although he doesn’t have strong political leanings, he is drawn to the story of Richard Nixon due to his desire to be famous in the US. In fact, he is drawn so much to the story that he personally funds the interviews and risks losing everything for this remarkable chance to interview the President. As the film moves along, parallels are drawn between the motives of Frost and Nixon, and this provides an interesting dynamic between the two leads.

The movie is masterful, and it has the cast and crew to thank. The two main actors reprise their roles from the stage version of “Frost/Nixon”. Frank Langella admittedly looks nothing like Richard Nixon, but his portrayal of the former President is spot on. He embodies Nixon not only in voice, but also in his quirks, mannerisms, and movements. His performance has already garnered him some attention, and will no doubt lead to an Oscar® nomination. Not to be out-done is Michael Sheen (“The Queen”) as David Frost. Sheen does a great job bringing a human element to Frost, and his reactions to Nixon are priceless. The supporting cast is first rate, and includes such veterans as Oliver Platt, Kevin Bacon, and Sam Rockwell. Ron Howard is excellent behind the camera, building suspense at every turn.

If I have one complaint from a moviemaking standpoint, it’s the historical accuracy of “Frost/Nixon”. As a history teacher, I couldn’t help but notice that some liberties were taken with the story. The order of the interviews was changed to highlight one particular interview and build suspense. Also, a few fictional conversations between Frost and Nixon were added. While this added a great deal of gravitas, it still distracted me slightly during the film.

From a Christian viewing standpoint, the film is rated ‘R’ for a reason. Nixon was known for having a foul mouth, and that is shown in the film. There is strong language, including several profanities, but I felt as though the film makers did a good job of acknowledging the profane aspect of the story without glorifying it. Also, Frost is seen as somewhat of a womanizer, and is shown with various women in different stages of undress. Just like the language, this is shown in an appropriate manner, and the film doesn’t dwell on these attributes. The only completely unnecessary thing in the film is near the end, where there is a brief shot of a naked man seen from behind. It’s played for laughs, but it just wasn’t needed.

While the film isn’t for kids, it’s a solid option for adults going to the theater. It’s a smart, well-crafted, political thriller with a top notch cast. Ultimately redemptive, “Frost/Nixon” is as well made as any movie of 2008.

Positive
Positive—I enjoyed this movie. Intense at times, boring at others, but great acting all around. The female character, Caroline, was the only weak point in this story line, since she is pointless to the plot and just “eye candy” for the male audience. While there is a brief video shown in the movie of war violence, some language, and a man's butt, this movie was relatively clean and refreshing.
My Ratings: Moral rating: Good / Moviemaking quality: 3½

Chrissy, age 24 (USA)
Positive—In addition to the re-ordering of interviews for dramatic purpose, there are also some liberties taken with the story. The movie neglects to mention that Nixon was paid $600,000 plus royalties, that the unplanned break in one of the interviews was asked for by Frost after misreading a cue card, and that Nixon did NOT admit to anything in the interviews. The altered lines/“quotes” bother me most as the are very misleading about Nixon, Frost, the outcome, and public opinion.
My Ratings: Moral rating: Average / Moviemaking quality: 4½

Kim, age 38 (USA)
Positive—I found this to be a riveting film, focusing on Frost trying hard to get Nixon to admit to wrongdoing. However, I remember Watergate. I lived in DC at the time. I saw Nixon resign, and I felt the gloom experienced by us all in the District when our leader departed. It was tragic. The movie takes liberties with facts for dramatic purposes. These were real people, and I went to college with one of President Nixon's daughters. I know how much she loved and admired her father, and his good side was presented in the movie—only in parody form, not as credible reality. I don't know if the fault lies with the script or with the direction of the film/acting. I recommend the movie, but it is best to view it with some reservations about its truthfulness.
My Ratings: Moral rating: Average / Moviemaking quality: 4

Halyna Barannik, age 62 (USA)
Neutral
Neutral—The reason this gets a “very offense” line is simply because of the foul language. The language is sparse, but very strong, with the “F” word and “sh**”and the Lord's name taken in vain. There two scenes where you get mooned, once by Frost's girlfriend who is getting out of bed, and by one of his associates.

Otherwise, the movie was fantastic. The acting is incredible by both the men who play Frost and Nixon. I will be honest, as a Republican, I was expecting a cold hard portrayal of Nixon, like the Oliver Stone version, when in fact, Ron Howard gives an objective view. I was pleased. It portrays Nixon as he thought he was doing the right thing, and is truly sorry for his actions. As for Frost, it portrays him as a man who is just as bad as Nixon, but instead of political gain, he seeks fame and fortune. I would recommend this film to adults, if not for the language, I would recommend it to anyone.

HISTORICAL ACCURACY: The character of Jack Brennan, played by Kevin Bacon, is not portrayed correctly. Jack was actually a very easy going and laid back, whereas the movie portrays him with a gruff military personality.
My Ratings: Moral rating: Very Offensive / Moviemaking quality: 5

Positive
Positive—Right away I want to explain the “Offensive” rating I gave this film. Richard Nixon made bad decisions as a president, and felt no remorse for it—something the movie brilliantly protrays. There are also about 5 f-words.

But this film is absolutely amazing. It is slow and is completely comprised of talking, yet as the reviewer points out, there are NO boring moments in the entirety of it. It is a very engaging, charater-driven film that is historically acurate. I would reccomend this to anyone with the intelligence to want to. What a great film, it is one of my favorites if you can believe it!
My Ratings: Moral rating: Offensive / Moviemaking quality: 4½