for crude and sexual content throughout, language, some comic violence and drug references. 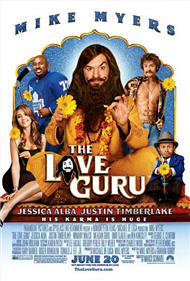 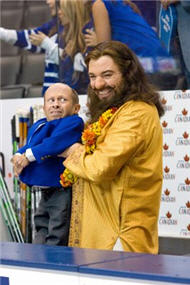 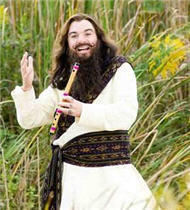 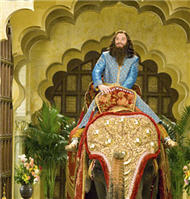 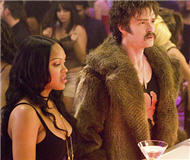 “His karma is huge.”

We all understand the feeling of the elephant in the room, the one that no one will mention, and yet it’s presence is cripplingly obvious and uncomfortable? While watching Mike Myers latest “The Love Guru” the metaphorical elephant comes to life on screen, while crickets chirp in the theatre.

The story begins with an American-born orphaned son of two missionaries, growing up in India under the tutelage of a cross-eyed guru, alongside the now famous Deepak Chopra. The boy, after undergoing a series of training sequences and donning a chastity belt, turns into His Holiness, The Guru Pitka. Pitka is now the successful owner of his own Ashram, where he gives sutras to B-list celebs, and is second in “the biz” only to Deepak himself. The story begins its climb as Pitka is hired to help the star player of the Toronto Maple Leafs Darren Roanoke, played by Romany Malco, mend his broken relationship with his wife, using his patented DRAMA technique. Jessica Alba plays Jane Bullard, the female owner of the team who is trying to overcome a curse of a long run of Stanley Cup losses. The story follows Pitka through his crazy teachings as he attempts to aide Roanoke back to a healthy marriage, The Leafs to a Stanley Cup, and himself to a fulfillment of his chastity vow, and therefore closer to Jane Bullard.

There is little that I can say positively about this movie. The story is fantastical and completely unrealistic. Albeit those two qualities do not always make an awful movie, however, this film fails to even achieve its purpose of making it’s audience laugh. The only comedy presented in this film was toilet-based for cheap laughs, or anatomy jokes, lacking any ingenuity and giving no credit to the intelligence of the audience. It is clear that Myers was attempting to create an Austin Powers for the next generation, and while the objectionable content remained on par with the Powers movies, the characterization and more importantly, the comedy, fell far short.

Though this movie hints at many spiritual leanings, it does not seem to truly enforce or engage in any. There is no mention of God, or gods, and nothing seems to be worshipped except the concept of learning to love oneself. The Hindu teaching of Dharma is mocked with Pitka’s method of DRAMA, and jabs are aimed at anybody who takes the advice of one man too seriously, as nothing seems to hold any weight. The film contains a considerable amount of inappropriate language, though not always with the most common words. Much of the language was disguised as difficult to pronounce Indian names or places. Though there was no direct nudity or sex, every scene screamed some kind of innuendo.

Littered with rude and crude dialogue, sexually inappropriate jokes, bathroom humor and tired comedy routines, this movie had very little worth watching, in this reviewers opinion, and the Guru Pitka is welcome to summon $12.00 back into my bank account. I would not recommend this film even to those who are diehard fans of Myers previous classics, as “The Love Guru” cannot seem to muster the laughs that Power’s commanded.

Neutral
Neutral—I went to this movie with high hopes. It met my expectations and disappointed. Mike Myers plays Guru Pitka, who at the age of twelve joined a guru. Fast forward 15 years and Pitka is the 2nd most popular guru in the world. He is known as “The Love Guru.” The only reason he isn't number one is that he hasn't been on Oprah.

So, after you find this out, you learn of Darren Roanoke (played by Romany Malco) and Prudence Roanoke (played by Megan Good), who after split sometime before the movie begins. Darren is the lead star player on the hockey team Toronto Maple Leaves. Prudence after the split gets together with Jacques Grande (played by Justin Timberlake), who plays for the L.A. Kings.

After you learn all this you find out Darren is not playing well at all. In fact, this whole fiasco happens right before the Stanley cup Playoffs. The team's owner Jane Bullard (played by Jessica Alba), and the team's coach Punch Cherkov (played by Verne Troyer) decide to hire Guru Pitka to get Darren and Prudence pack together so Darren will play well and win the Stanley cup. What does Guru Pitka get out of this, 2 million dollars and a spot on Oprah. That is if he gets Darren and Prudence back together. After that ensues a somewhat chaotic ride through some humor and just plain stupidity.

SEXUAL CONTENT: The movie is rated PG-13 for crude and sexual content throughout, language, some comic violence and drug references. It truly lives up to its rating. From the movie's tagline to the movie's music, this movie is saturated with crude and sexual humor. The tagline just gives you a taste of it. “His Karma is Huge.” That's just the beginning. Pitka's guru at his ashram is named Tugginmypudah (played by Ben Kingsley) (who is severely cross-eyed). There is multiple and I mean multiple sexual jokes. When Pitka tells Tugginmypuddah that his parents were dog groomers then they became missionaries (whom you also find out are dead), Tugginmypuddah replies with the crass joke, “They were into doggy style before they got into missionary position.” He laughs at Pitka's expense. When you find out that Pitka wants to join the ashram because he wants to get girls, Tugginmypuddah tells Pitka he must wear a chastity belt. Immediately after Pitka asks if he can masturbate while wearing the belt. Tuggingmypuddah sternly replies that he will go cross-eyed. Which implies how the elder guru became cross-eyed.

Pitka's self-help words usually form crude and sexual phrases. Jacques nickname is “Le Coq.” Which he supposedly got because of his extraordinarily large penis. Which reveals multiple times in the movie. The camera thankfully never dips below the waist. Jacques also has a tattoo the points up and says “The Man,” then also points down and says “The Legend.” Near the end of the movie, elephants are shown performing the act in front of an entire audience of people. While one announcer replays the act graphically for us. There is much more, but it would take me an hour or two to write it all.

VIOLENT CONTENT: Violence in this movie mostly limited to powerful blows on the hockey rink in games you witness throughout the movie. Also men get punched in the groin multiple times throughout the movie. Coach Punch feigns a heart attack and the paramedics shocked him with a defibrillator and is sent three-quarters of the way across the hockey rink. While Pitka is trying to reach Prudence to deliver a message to her, he is viciously attacked by Jacques “guard” rooster. Afterwards, you see Pitka bloodied and bruised with feathers all over him.

LANGUAGE: Characters say the s-word about 5 times. Multiple middle fingers are given throughout the movie. Several other profanities raise the total to about 15 swear words total. God's name is abused once.

SPIRITUAL CONTENT: This movie contains very little spiritual content. There is an acronym that Pitka uses that spells out “Bible”—“Basic Instructions Before Leaving Earth.” Early in the movie Pitka suggests we can all be divine by saying, “To know something is good; To do something is God.”

This both made me laugh and made me feel proud that I'm not as stupid as the people are in this movie. If you can stand all the crude and sexual humor throughout the movie you might find this movie funny and you might not.

Be forewarned though, this movie contains some very graphic sexual content towards the end. I can't say it's the best movie ever, but some parts will make you laugh very hard.
My Ratings: Moral rating: Offensive / Moviemaking quality: 3½

Jon Edwards, age 18
Negative
Negative—I saw this movie at a free premier. I felt it was very offensive. There was a lot of crude humor and language throughout the entire film. I am not one to write reviews, but I felt PG-13 seemed underrated.
My Ratings: Moral rating: Extremely Offensive / Moviemaking quality: 1½

Anonymous, age 32
Negative—This movie was soooo bad I went thinking it would be funny but everything was so offensive. I don't want our kids to think that this is the kind of stuff they find humorous. I am very sorry I went to see this movie.
My Ratings: Moral rating: Extremely Offensive / Moviemaking quality: 1

Mary, age 40
Comments from young people
Negative—I do not think that this movie was at all glorifying to God. It had a lot of sexual content. The language was average, but there was some cursing (about as much as most PG-13 movies do). I certainly think that children under 13 should not see this!
My Ratings: Moral rating: Very Offensive / Moviemaking quality: 2