Mirrors a.k.a. “Into the Mirror” 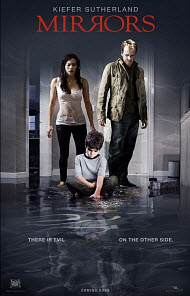 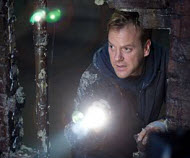 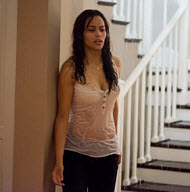 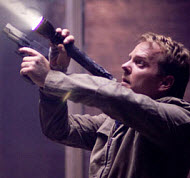 mirrors in the Bible

“There is evil… on the other side.”

“Mirrors” is the story of Ben Carson (Kiefer Sutherland), a recovering alcoholic, ex-police detective who was fired for accidentally shooting another officer. His marriage has suffered because of his drinking, and he is currently living with his sister Angela (Amy Smart).

He takes a job as a security guard at an old department store that has burned. Basically, his job is to make sure no one goes vandalizes the ruin. Each night he makes his rounds throughout the ashes of the creepy, dark store, filled with crispy mannequins and other burnt stuff.

One night, while making his rounds, he discovers that when he looks into the mirrors he can see what happened in the store in the past. He can feel his flesh burning as his security uniform catches fire. But, after a few minutes, he realizes he is not on fire, he was just seeing things. He continues to see images throughout his shifts and one night ventures down into the basement where he finds a leak. He breaks through the wall to find a room of mirrors with a chair in the center. The chair has straps, as if to hold someone in it.

One night, the mirrors give him a name. This begins his quest to find this person, for now he knows that, if he does not succeed in finding this person, the mirrors will kill him and his family, as they did other people before him.

He begins to hunt down the person the mirrors gave him and discovers it is an old woman who has become a nun. Before the building was a store, it was a mental hospital, and the woman was sent there when she was a young girl. One of the doctors treated her by strapping her in the chair in the basement and forcing her to look at herself for weeks and months. This proved to be an effective treatment, as the demons left the little girl and entered the mirrors. Now the little girl is old and hiding in a convent, free from demon possession.

Now for my analysis of this movie. I get to see all my movies for free, because I manage a cinema, but if I didn’t, and I had paid 8+ dollars to see this, I would have been disappointed.

All of the actors did a good job with their roles; no one was totally stinky in that area, but the story itself and the overall effects of the movie just didn’t seem to come together. It was more like a “movie of the week” detective drama with some blood, screaming and a few scary scenes thrown in. It wasn’t the horror movie I expected it to be.

There is a scene of a dead woman screaming in the dressing room, and her breast is half-exposed and another scene where Amy Smart is naked and shown from behind getting into the tub. Amy Carson (Paula Patton) also wears some low cut blouses.

There are approximately 12 incidents of profanity, mostly the f-word, with at least one incident of “bitch” and, at least, one incident of GDamnit. At one point, he asks the nun “where are you, you bitch,” which shocked me and made me laugh at the same time. Who calls a nun a b? Even if she is demon possessed??

Blood and gore elements are scattered throughout. In addition to the burning women in the dressing room (mentioned above), there is an opening scene of a security guard cutting his own throat. There is also a very badly done, gory bathtub scene where a woman kills herself. Near the end, there is a scene where the mother’s reflection tries to kill the little girl. There are some scary flashbacks of the nun when she was a child and some other disturbing images of things living in the mirrors.

When Kiefer finds the nun, I personally expected her to willingly and selfishly give herself up, but nope, he has to pull a gun on her and force her to go to the store and discuss it with the mirrors. He takes her to the store, and she willingly lets him strap her into the chair, and the demons hungrily jump back into her, as if she was food, and they hadn’t eaten in years.

The end shows this demon possessed nun being chased through a watery basement by Keifer trying to kill her, to put her out of her misery.

Overall, I would say don’t spend 8 dollars on this movie. I wouldn’t even suggest buying it. This is one that will surely be on the bargain racks in no time. If you don’t see it, you haven’t missed much.

Negative
Negative—This movie was a waste of my time and my money. This had to be the most ungodly, satanic movie that I’ve ever laid eyes on. I felt like seeing a horror film with my friend, and I saw the previews online, thinking that it would not be too scary or gory. But I was completely wrong. This is not a movie any Christian should ever see. There so much blood and gore and scary moment that I had to look away most of the time. Do not see this movie. I did not approve of it and neither does the Lord Jesus.
My Ratings: Moral rating: Very Offensive / Moviemaking quality: 3

Alexander Malsan, age 18
Comments from young people
Negative—Wow this movie stinks. These people don't understand the nature of demons, so their supernatural side fails. The bloody is corny and laughable; there is no substance to the plot. The movie is too long for the story it's trying to tell, and so many other points I can't list them here. DO NOT WATCH THIS MOVIE!!! That's all I can really say.

Frank Scheck, The Hollywood Reporter
…good for laughs, not screams…

Tenley Woodman, The Boston Herald
…Horror flick offers not much to reflect on… Sutherland gives fair value, flipping out every time he sees something that he shouldn't reflected back at him. It's not laughably bad; it's just not scary.