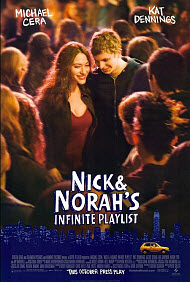 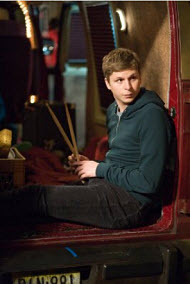 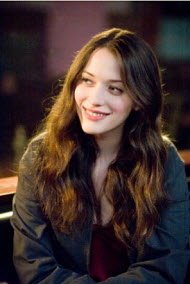 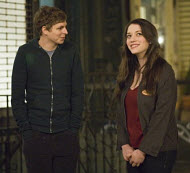 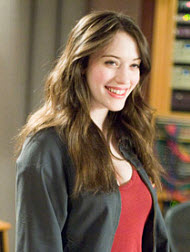 Based on the novel by Rachel Cohn and David Levithan.

When I got a chance to see “Nick and Norah’s Infinite Playlist” at this year’s Toronto Film Festival, I went hoping that it might be an updated “High Fidelity.” Unfortunately, the two movies are very different, both in terms of accomplishment and substance. Stephen Frears’s comedy masterpiece, based on and borrowing heavily from Nick Hornby’s novel, is actually about the perils of arrested development. Peter Sollett’s film, in contrast, is a celebration of it.

Michael Cera plays Nick O’Leary in a so-shy-it-hurts retread of his “Juno” role. When the film opens, Nick has been dumped by his man-eating girlfriend, Tris (Alexis Dziena in full throttle slutty ex-girlfriend mode). He makes countless mix tapes to get her back, which Tris dumps but which are found by Norah (Kat Dennings). When the principals all decide to take an all night excursion in search of a local legend cult band, Nick’s friends decide Norah would be a good rebound for their hurting buddy. Lots of predictable (and not particularly funny) complications arise throughout the night: Norah’s best friend, Caroline, gets drunk (and then lost) and must be found before club hopping can continue; Norah’s own jerk of an ex-partner shows up and doesn’t want to give up his meal ticket (Norah’s father owns an influential recording studio); Tris decides that just because she doesn’t want Nick doesn’t mean someone else should have him. The only real thing keeping the two apart, though, is the fact that the film has to end when they are together, and Sollett needs it to run at least ninety minutes to ensure he has enough time to get all the music clips in that might sell the soundtrack.

The film tries hard—desperately, in fact—to convey an aura of madcap fun and of once-in-a-lifetime magic being in the air. What we actually get, though, once one looks past the charismatic actors and listens for more than the popping soundtrack, is a portrayal of a hook-up generation that is more sad than sexy, more tired than glamorous. Lest some readers think I’m critiquing the lifestyle rather than the film, I will add that the characters aren’t developed meaningfully or realistically to enough of an extent that we understand why they should be together or care if they are. For example, in the final scene—spoilers ahead, mateys—the camera pans around the room while Nick and Norah make out. Dennings’s moaning voice-over is unquestionably meant to assert that Norah has finally had her elusive first orgasm, after which the tryst is interrupted by a text message that tells her where the band they were looking for earlier has been spotted.

There are, I imagine, a few high-school boys out there somewhere who care more about finding the band than having their turn when they are “getting some” (they are both mostly clothed when the camera returns to the characters), but it is hard to really buy Nick as a member of the “there are more important things in life than sex” brigade when his only reason for wanting Tris back (or being with her in the first place) is physical. In other words, these are not real people whose problems, questions, and choices can give us insight into our own. They are devices—cardboard standouts designed to give our eyes something pretty to look at while we’re listening to the film’s soundtrack. Who they are at any point and time in the film need have no relationship to who they are at any other.

Then again, I will admit that I am the wrong demographic for this film. I don’t understand what’s so funny or glamorous about getting so drunk you are willing to fish around in a vomit filled toilet for the gum you just spewed into it. I don’t get the whole “friends with privileges” concept. (If it’s so commonplace, then isn’t there something dishonest about calling it a “privilege”? And isn’t the frank generation supposed to hate hypocrisy of all sorts, including doublespeak, above all things?) I don’t understand why so many people in their twenties and thirties are so nostalgic about a time in their lives they couldn’t wait to get out of. I don’t understand why you would want to be with someone who doesn’t want to be with you (okay, that one’s not unique to people of a particular age) or how sex can be casual and still be enjoyable (which is not the same as it being pleasurable). I don’t get why being an enabler is seen as the highest form of friendship and why searching for a hidden rock band only makes finding it more satisfying while searching for true love isn’t worth the increased effort it might take over simply hoping that true love is searching for you.

In the film’s most true moment, Norah talks about breaking up with her boyfriend (or friend with privileges) of several years because she wanted to be “noticed” again. It was only in that comment that I got a glimpse, albeit a small one, of the allure of a “hooking up” life style. It is the rush of potential, the thrill of the moment where you first realize the other person could be the one.

The thing is, potential has to be watered with work and time before it blooms into a soul-mate relationship, and those qualities are nowhere to be found in the hook-up culture of the film, which appears, as best I can tell, to take the attitude that the faster you give up and move on, the sooner you’ll cycle through all your failed loves and find that special someone. There is, then, something unintentionally ironic about the word “infinite” in the film’s title. That word is supposed to imply, I think, that the magical moment can go on forever—that the point in time where one is so in love that one just wants to make mix tapes for the other person doesn’t have to fade.

There’s another word, though, for being stuck infinitely in the same place. That word is hell. That the characters in the film desire that addictive feeling of the first pangs of love mixed with potential is understandable. That they can’t even imagine (and the film can’t imagine) the possibility of a deeper, stronger, fuller, sort of love is just bloody tragic. I don’t mean to suggest in some puritanical way that the film (or the culture it depicts) mistakes lust for love. I mean to suggest that it mistakes infatuation for love. All of which may be why my response to Nick and Norah was not disapproval, but pity.

Because despite Norah finally finding a guy that will bring her to orgasm and despite Nick finding a girl who will listen to and appreciate his mix tapes and despite Caroline’s relief that this time when she woke up from passing out, the strange guys in the van she found herself in were not trying to rape her and despite the glee of an auditorium full of fans who would give their right pinkie to share a vomit flavored wad of gum with Kat Dennings or Michael Cera, there was a sheen of sadness that permeated from the very pores of this film. Nick and Norah’s defenders—and there will be many, if audience reaction at the Toronto Film Festival was any indication—will say I’m just projecting my own feelings onto the film. Who knows, maybe, I am. But I’m suspicious of any person or film that tries this desperately to tell me that: a) they are having a good time; b) they are in love; or c) really, really liking the same band is a better foundation for a relationship than actually knowing the other person.

[Note: Portions of this review originally appeared at the Looking Closer Journal Weblog. All rights reserved.]

Negative
Negative—I wish I'd read this review instead of the cowardly one at a different website. I would never have wasted time on this bomb. This movie was a course, sex packed sleezefest. Drunk girl suggesting a threesome. Guys talking about the course name of their band and suggesting further course names for it. High school girl in lingerie. Girl trying on different bras to make her breasts more appealing to a high school boy. Fools having sex in the back of a cab. Drunk girl tosses her cookies. Drunk girl reaches into filthy toilet bowl to retrieve dropped cel phone and a piece of gum that she then chews.

Other than that, great soundtrack!
My Ratings: Moral rating: Very Offensive / Moviemaking quality: 4