Hypocrisy in the Church—
“I would never be a Christian; they’re a bunch of hypocrites.”

A few years ago I received an e-mail from a man living in south London which said (in part),

“I choose not to believe in the incredible hotchpotch of superstition which is Christianity… which is all the more understandable if you come from Northern Ireland, a place where religion has been the excuse for appalling barbarity.” 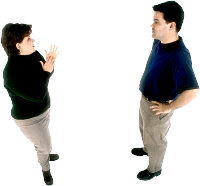 This man, like so many others with whom I have spoken over the years, claims to have rejected Christianity because of what he perceives to be blatant hypocrisy on the part of Christians, historically and presently—people who “profess what they don’t possess”—who are phony, empty, and hollow to the core.

Perhaps you, too, have felt justified in either avoiding or rejecting the Christian faith because of some instance(s) of disgusting hypocrisy that you have encountered in those identifying themselves as Christians. If so read on, as we offer four key responses to the line…

“Hey, I would never be a Christian. I mean, look at all the hypocrites in the Church!”

“Well, we’d be glad to move over—there’s always room for one more. And furthermore, if you ever find the perfect church, please don’t join it. You’d spoil it.”

Does that response strike you as a being a bit too smart-alecky? Perhaps so, but before you totally discount it, consider the point that is being made. Is this not a case of the pot calling the kettle black? Are not four fingers pointing back at you as you point at the Church? Are you not a bit like the father who once screamed at his teenage son: “Kid, if I’ve told you once, I’ve told you a million times—don’t exaggerate!”

“You’re right. There is far too much hypocrisy in the Church. And there always has been. But it’s certainly not being condoned.”

An honest admission here may hopefully clear the air enough to make it evident that there are many men of integrity in the Church boldly crying out against hypocrisy today. The Bible’s condemnation of hypocrites is clear. The Bible also clearly pledges that God will judge hypocrites (Matthew 24:51). God is more angered by hypocrisy than we can ever be.

“Since when do you allow hypocrisy to determine your affiliation and participation?”

We’ve all heard of medical quacks—but have you you stopped going to the doctor? There have been news reports of hamburger contaminated with E. coli—but have you stopped eating Big Macs? Jonathan Pollard and Benedict Arnold were phony, hypocritical Americans—but are you planning to leave the country?

And where would you go anyway? With what faith would you ever align yourself? Certainly there are also hypocritical Hindus, Muslims, and Buddhists. Even atheists. Like the fella who once participated in a formal debate with a minister. The atheist clearly out-debated the clergyman, but the minister was declared the winner because at the end of the debate, in a sudden flush of victory, the unbeliever shouted out: “Thank God I’m an atheist!”

“You’re right—the Church is not perfect. But Christ is. Fasten your eyes on Him.”

Cliff Knechtle in his book Give Me an Answer, © 1986 IVP writes: “We all either try to hide our bad sides or we try to make them look good. But deep inside we all know that we fall short of living the way we know we should. No one can escape the charge of “hypocrite”—no one except Jesus Himself. He is the only One who has lived up to God’s standards; the only One who has perfectly lived what He preached. Only through…Christ can we escape the penalty due our hypocrisy… By living within the security of Christ’s love, we are free to peel off masks and to become real, honest people.”

Ruth Bell Graham, wife of international evangelist Billy Graham, shares the true account of a young college student from India by the name of Pashi who once told her, “I would like to believe in Christ. We of India would like to believe in Christ. But we have never seen a Christian who was like Christ.” Ruth Graham says that when she consulted Dr. Akbar Haqq about what might be the best response to Pashi’s challenge, Haqq answered decisively, “That is quite simple. I would tell Pashi, ‘I am not offering you Christians. I am offering you Christ.’” —Decision, 10/2000, p 39