for thematic elements including some scary images, and sensuality 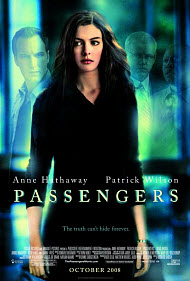 Some years back it became quite the trendy thing for movies to wrap up with unexpected twist endings that left its viewers shocked and longing to re-watch the film, taking in what they missed. Perhaps, after a time, these movies became less frequent because the very method grew tired, unoriginal… I imagine success could still be reached with this surprise ending genre—if an inventive and original formula could be found. Suffice to say “Passengers” is not such a film.

Claire Summers (Anne Hathaway) is the therapist overseeing the case of five survivors, after their plane crashed tragically on a local beach. With conflicting memories and varying degrees of trauma, Claire finds it a struggle to relate to her patients. The one she seems most drawn to, however, is Eric (Patrick Wilson). Due to Eric’s odd behavior, coupled with bizarre accusations from some of the other survivors, Claire begins to suspect that there is an airline cover-up going on. Believing that the truth would lead to healing—Claire crosses the line to find the missing pieces and discover what truly went on…

Overall, I was really disappointed in “Passengers.” While it was obviously going for that big twist ending, with high hopes of keeping its viewers on the edge of their seats from intensity, this film only seems to keep its watchers thoroughly confused. Although it wasn’t unbearable to watch, it did sort of feel like a wasted hour and a half.

Positive—For Hollywood, this movie is cleaner than most movie that are made.
My Ratings: Moral rating: Better than Average / Moviemaking quality: 4

Terry, age 42 (USA)
Movie Critics
…Plane crash thriller grounded by clichés… what’s surprising is that it was even made at all. …

Geoff Berkshire, Metromix
…Anne Hathaway’s ‘Passengers’ is plane awful… a clunky, dead-on-arrival scary drama that proves that even people with good taste need a good script or direction. Which is not what they get from writer Ronnie Christensen and director Rodrigo García. …

Amy Nicholson, Boxoffice Magazine
…the mystery-drama about plane crash survivors stalls over a too-predictable story… a trip audiences have taken too many times before. …