for crude and sexual content, strong language and nudity. 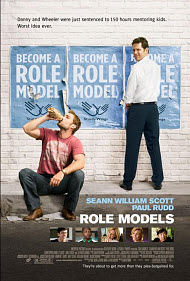 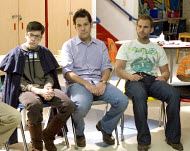 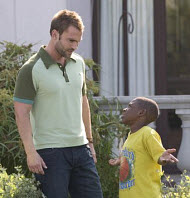 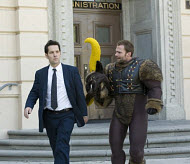 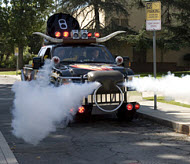 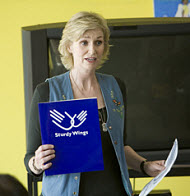 A single man or woman can help change the world. Read about some who did with faith and God's help…
Jesus Christ, Noah, Abraham, Joseph, Moses, and David

“Danny and Wheeler were just sentenced to 150 hours mentoring kids. Worst idea ever. They're about to get more than they plea-bargined for.”

There are a few different genres of movies that have been done so many times you just cringe at the idea of sitting through another one them. One of those genres is the “buddy” movie. Whether it’s action or comedy or a mixture of both, two characters without much in common come together through a series of unforeseen circumstances. These films, popularized by such films like “Stir Crazy”, “Twins”, “48 Hrs.” and “Lethal Weapon”, have long lost their luster and originality. I have to say one of the many surprises I found while viewing “Role Models” was a fresh, funny, vulgar but somehow endearing new take on the “buddy” movie.

The story revolves around two business partners, Wheeler (Seann William Scott) and Danny (Paul Rudd) who travel to local grade schools to hock their new energy drink while also giving a “Say No to Drugs” message. It’s on one of these trips where a depressed and angry Danny has a terrible day and takes his anger out in a scene which I won’t spoil, but needless to say it leads to the arrest of he and his partner.

Instead of jail time, they are sentenced to 150 hours of community service in a program called ‘Sturdy Wings’, a big brother/big sister type of organization. Danny and Wheeler are paired up with Augie Farks (Christopher Mintz-Plasse) and Ronnie Shields (Bobb’e J. Thompson), two kids each with their own personal quirks and characteristics that we find out throughout the film.

With these pairings we get some funny moments highlighted by a carjacking, a camping trip, and an in depth look into the world of medieval role playing games. Although resistant at first, Wheeler and Danny eventually develop meaningful relationships and learn to care about things other than themselves.

The cast in “Role Models” is first rate. Paul Rudd is underrated as a leading man, with great dead pan dialogue. Christopher Mintz-Plasse of “Superbad” fame continues to play the lovable nerd well, and Jane Lynch (“Best in Show”, “A Mighty Wind”) steals every scene she’s in as the head of ‘Sturdy Wings’.

It would be great if that were all I had to report, but unfortunately the filmmakers decided that “Role Models” would appeal to a wider audience with a hard ‘R’ rating. Understanding that a transformation would take place within the leads, I expected some juvenile and inappropriate behavior, and this type of behavior abounds. The language is very strong, especially when you have a ten year old kid that is responsible for a good deal of it. The sexual content is rampant, and there are two cases of nudity that I found unnecessary.

This film is ultimately heartwarming and has some redemptive qualities. While the lead characters continuously act in an inappropriate manner in front of children, they eventually put aside their selfishness to do what’s best for the kids as well as each other. One set of parents realize that it’s okay that their kid is different, and they learn to love him for who he is.

It’s a shame that this movie isn’t at all appropriate for kids or teens, because there’s a message they could really use. Even for discerning Christians, the consistently funny material on display may not be worth the ongoing language and strong sexual content. While “Role Models” definitely injects new life into the “buddy” movie, it does so with irreverent material that may keep the Christian viewer at home.

Positive
Positive—I thought the movie was excellent! Very funny with charming turns by the whole cast. The arguments that this film would have been better without the R rated material is silly. Much of the comedy was derived from the use of R rated content and it's mix with kids. That was the premise for the comedy. Without that the movie would have been fundamentally different. And also would have been very similar to the MANY family oriented, non funny comedies. It was refreshing to see such a strong moral tale be mixed with such gloriously fun adult content!

Adult comedy lovers should rejoice that we are getting such high quality comedies made just for us! PG is often the death of good adult comedy!
My Ratings: Moral rating: Better than Average / Moviemaking quality: 4

Steve, age 48 (Canada)
Neutral
Neutral—I believe that the reviewer gave it a fair chance. This movie dropped so many cuse words and contained unneeded nudity most likely to appeal to a large audience, but the overall story was great. There really were some down right hilarious parts and even the heartwarming as well. After seeing it a second time, I found the crude parts to stand out more than the funny ones, ( probably because now I know when the comedy is coming) and it doesn't seem worth watching. But I do recommend seeing it once for the story, but after that the offensiveness keeps it from becoming a favorite of mine.
My Ratings: Moral rating: Very Offensive / Moviemaking quality: 3

Josh, age 21 (USA)
Negative
Negative—It was disturbing to me to see the 8-year-old character use such foul language and talk about inappropriate topics. There should be more warning for people before seeing this movie. There is a great story here in how these two troubled kids made a positive change in the adults. It is a shame that the film makers put such crudeness in the movie. I think the same lesson and humor could have been accomplished in a clean manner.
My Ratings: Moral rating: Extremely Offensive / Moviemaking quality: 5

Wendy, age 43
Negative—The F-word was used so many times, it was painful. Not only by the adults, but by the children. I'm amazed that the parents of these children allowed them to be in this movie. There were many sexual comments, even by the children. I think the movie could have been extremely funny if they had eliminated the cursing and sexual comments. But they didn't and I do not recommend seeing this film. It was extremely offensive. I regret staying for the entire movie.
My Ratings: Moral rating: Extremely Offensive / Moviemaking quality: 4

The title “Role Model” is very deceptive from my view of a role model. I think a title of “Devil's Den” would be more appropriate. I know we live in a fallen world, but movies like this only contribute to evil, instead of inspiring the truth as told in the bible and Jesus Christ. I pray that everyone involved in this movie would reflect on there actions and turn toward GOD and Jesus Christ for wisdom and direction in future movies.
My Ratings: Moral rating: Extremely Offensive / Moviemaking quality: ½

David K., age 60 (USA)
Negative—I agree with all the other comments about the offensiveness of this movie. However, I would like to add one big glaring vulgarity that seems to be overlooked. In one scene, at the party where Wheeler and his child buddy go to ogle women, etc., he randomly finds a woman with which he promptly head upstairs to have supposedly commitment-free and consequence-free sex. We have school-teacherl fantasies, failing to know the whereabouts of a child in your care at an adults-only party, and the most offensive comment of all. Wheeler says, “I don't have a raincoat (condom).” The loose female promptly and cheerfully replies, “That's okay, I'm pro-choice!”

The film glorifies their behavior as they choose to have sex. Too bad if a baby results from such irresponsible behavior. The female can simply have it murdered in her womb at her local, legal, “safe” abortion clinic! No worries! Never mind the choice she made by having sex (and the potential consequences--creating a human life), she will make her choice when and if she becomes pregnant from a man she hardly knows (other than that he has committed a crime for which he has been given community service). The list of objectionable, immoral, and offensive behavior, regardless of whatever point the creators are trying to make, is too much. The icing on the cake, and the last straw was the anti-life comment thrown in which is typical of the norms in our society. If you are irresponsible, don't worry about accepting the consequences of your actions! We can and should have hot random sex with vague acquaintances at parties! Ewwww, a baby? No way, I'll just murder it and go on with my care-free lifestyle.

When the female character states she is pro-choice… what choice is she for? Readers who may not be familiar with the horrors of abortion would do well to check out the info at http://www.lifesitenews.com/abortiontypes/ . Who would choose dismembering or torturing their child--a real human being? See for yourself.

Unfortunately, this is a choice made in the USA 3,000-4,000 times A DAY! We don't need yet another influence glorifying a lifestyle of fornication and murder, so skip this movie and make sure your teens and young adults do not go along with the message it contains.
My Ratings: Moral rating: Extremely Offensive / Moviemaking quality: 4

Kristin, age 29 (USA)
Negative—Dear viewer, I watched about 15 min. of this film. This film had a great “anti-role model” scene. He encourages the boy's lower impulses.
My Ratings: Moral rating: Offensive / Moviemaking quality: 3

Steven, age 24 (USA)
Negative—I had a very hard time getting through this film because of the many sexual comments and foul language. When I finished it, I felt extremely guilty that I actually sat through the whole thing. When an 8-10 year old boy curses more than the adults and makes several sexual comments, then there is something seriously wrong. For anyone considering watching this film, I challenge you to think about what it would be like to be watching it with Jesus Christ sitting right next to you. Would you still finish it or even start it?
My Ratings: Moral rating: Extremely Offensive / Moviemaking quality: 4½

McKenna W., age 18 (USA)
Comments from young people
Negative—This review makes this movie sound better than it is, because this movie is horrible. Every five minutes some disgusting (and I mean disgusting) sexual joke pops up, not to mention the nudity. Aside from that, some parts of the movie were fun, mainly those with Augie who's a bit of a fantasy geek, but I would never watch it and go through the other stuff just for that. It bothered me the whole way through; It really isn't worth watching.
My Ratings: Moral rating: Extremely Offensive / Moviemaking quality: 3