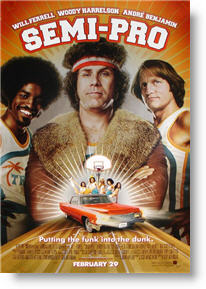 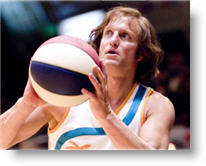 How can I tell if I'm getting addicted to pornography or sex? Answer

“Putting the funk into the dunk”

There is no dispute that Will Ferrell is a hilarious, talented actor. Along the way, he has made charming movies such as “Elf” and “Stranger than Fiction.” He has also shown his writing abilities when he teamed up with Adam McKay and created “Anchorman” and “Talladega Nights.” Both movies had objectionable content, but they still contained funny parts to be enjoyed. In his latest movie, “Semi-Pro,” Ferrell did not write the screenplay; he just lent his talent and his name. Those wanting to see this new film because of Ferrell’s past movies should be forewarned. This movie does not have any Ferrell humor or any good humor at all. In its place is an utterly vulgar, filthy movie.

It’s 1976. Will Ferrell plays Jackie Moon, a one-hit wonder that once had fame for his song “Love me Sexy.” After the success of the song, Jackie Moon now owns the Flint Tropics in the ABA basketball league. His stadium is nearly empty, with a few devoted fans. He, however, doesn’t seem to mind. He loves his team and being a leader. Once a rumor of a merger between the ABA and the NBA start circulating, Moon becomes excited that he and his team will finally be a professional basketball team.

The meeting doesn’t go well for Jackie and several other ABA team owners. Yes, there will be a merger, however, only 4 teams will be accepted by the NBA, the rest of the ABA teams will be dissolved; predictably, Moon’s horrible team is not one of the four. After throwing a fit, Jackie and a few other owners convince the commissioner that the best four teams by the end of the season should be selected. Trying to improve his team, Moon trades the team’s washing machine for Monix (Woody Harrelson). With a new member, Moon feels he finally has a chance to win a spot on the top 4 list.

The plot of this movie was very thin. I summed up almost the entire movie in the above paragraphs. The characters in the movie were shallow and annoying at times. Warm moments were attempted, but were unfruitful. I believe the best performance was by Andre Benjamin who plays Clarence “Coffee” Black. He convincingly delivers his lines. However, he could not save the film; the script is not funny. Instead of trying to find true humor, the writer just filled it with crudeness, hoping someone would eventually laugh. The theatre I sat in remained mostly silent throughout the entire movie.

From beginning to end, the movie has extreme vulgarity and sexual references. Several scenes would carry on the filthy jokes, making sure the audience did not miss it. I gladly would have walked out if I had not been writing a review.

There was much more offense in this movie. I urge Christians to skip this filth. This movie was not funny. There are other cleaner movies that are actually humorous. Paul wrote that the body is not made for sexual immorality, but for the Lord. This movie dangerously teaches the complete opposite. I offended the Holy Spirit living inside me. My bottom-line advice is to stay away from this movie.

Negative
Negative—“Anchorman: The Legend of Ron Burgundy” and “Talladega Nights: The Ballad of Ricky Bobby” are two of my favorite comedies from the last decade. Will Ferrell has created two of the most iconic characters in pop culture with these two films. While some of the subject material was questionable in both films, they were fine films to enjoy when friends decide to stop by your house and hang out.

Unfortunately, I can't say the same for “Semi-Pro.” Yeah, it has Will Ferrell in it playing yet another character role (this time as washed-up singer turned basketball player/team owner, Jackie Moon), but I was surprised as to how much I didn't enjoy it. As with every Will Ferrell film, I expect going smiling and come out laughing, confident that I had a good time. But this film was unusually dark, even for Ferrell himself.

Sex, drugs, violence, even Christian hypocrisy was what ran this film from frame one. Probably the scene that put me off the most besides the shocking sex scene (yes, in a Ferrell movie!) was the scene when one of the basketball players was reading a Bible before the game while Jackie Moon spoke to the team. Noticing that the player was busy reading his Bible, Jackie began to smack the player in the face. As he continued to so do once more, the player quickly yells, 'Stop that ****!). I was really disappointed by the dark content of the film, the dark cinematography didn't help either. By the time I walked out of the film I felt shamefully dirty and somewhat depressed instead of happy that I had just spent ten dollars on a movie that would be “fun.”

That's not to say that the movie didn't have it's funny parts but they were too few to really recommend this film to a fellow Christian. I was really put off by this film. This, by no doubt, is Ferrell's most disappointing work yet. Hey, New Line Cinema, let me know when “Anchorman 2” hits theaters, and maybe we'll see what happens then.
My Ratings: Moral rating: Extremely Offensive / Moviemaking quality: 3

Nestor A., age 19
Negative—There is nothing remotely edifying to be found in this movie. Nothing. To say that it is funny requires a new definition of the term. It is tremendously offensive morally, poorly written and beyond predictable.
My Ratings: Moral rating: Extremely Offensive / Moviemaking quality: 1½

Leigh, age 39
Positive
Positive—My husband wanted to see this movie and I agreed because he was paying. So we went, and I didn't expect to laugh cause it looked really dumb. And come on it's Will Ferrell, which in my opinion is not funny at all! But then about 30 minutes into the movie I actually laughed! This movie was all right. This movie had nothing really sexual like nudity, but the language was pretty bad. It had about 5 bad words… f-words and s-words! So I would give this movie about 3½ stars out of 5 stars, because it was honestly pretty funny.
My Ratings: Moral rating: Better than Average / Moviemaking quality: 3½

Vvette, age 39
Comments from young people
Negative—This movie went totally against the Christians morals and values. Although this movie was extremely funny, I would not approve it. “Semi-Pro” contains a lot of sexual material and swearing. It does not support the christian viewpoint and is very offensive to Christian beliefs. I would advise all Christians to avoid seeing this movie.
My Ratings: Moral rating: Very Offensive / Moviemaking quality: 4