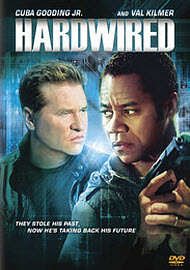 “They stole his past, now he’s taking back his future.”

Here’s what the distributor says about their film: “In this futuristic thriller, it’s a race against time as a man becomes the unwilling target of a dangerous corporation hellbent on controlling mankind through mind manipulation.

After a tragic accident claims the lives of Luke Gibson’s (Gooding Jr.) wife and unborn child, he is left with critical injuries and complete amnesia. A new technological breakthrough from the Hexx Corporation—a Psi-Comp Implant that’s hardwired into Luke’s brain—saves his life, but Luke soon finds out that this new technology comes with a price and that the Hexx Corporation harbors sinister plans for the new device. With the help of new allies, Luke tries to recover the memories of his past while uncovering the Hexx Corporation’s true motives.

After losing his wife in a horrific car accident, Luke Gibson (Academy Award® Winner Cuba Gooding Jr., Best Actor in a Supporting Role for Jerry Maguire, 1996) wakes up in the hospital to find his once idyllic life on the brink of destruction. Implanted with the lethal microchip and monitored closely by a Hope Industries executive (Val Kilmer), Gibson is plagued by strange visions and haunted by a past he cannot remember. If he wants to survive, his only chance lies with a group of renegade hackers who may be the only ones who know how to stop the dangerous corporation before it’s too late. Also starring Michael Ironside (Terminator Salvation).”