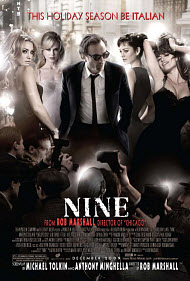 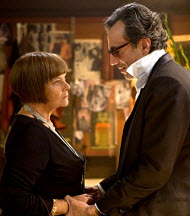 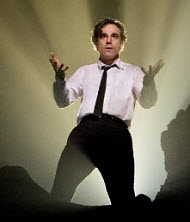 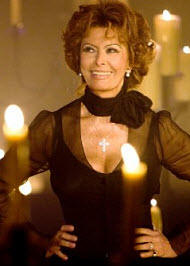 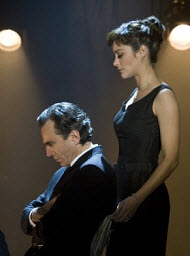 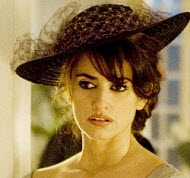 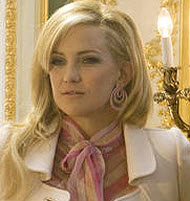 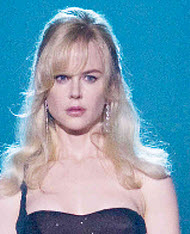 Based on the book by Arthur L. Kopit

Sometimes it’s a good idea to leave works of art the way they are. Hollywood has begun to devote itself to turning anything and everything into a film these days by remaking old movies, adapting children’s books, and generally destroying, in many ways, the memories we hold of the originals or perhaps even the posterity of them. “NINE,” Hollywood’s newest Broadway turned Christmas film, is a perfect example of such a trend, and will most likely disappoint fans of the original musical “8½.”

Guido Contini (Daniel Day-Lewis) is an Italian film director. He’s produced some of what are the most beloved films in Italy, but has, of late, produced nothing but “flops” and failures. Middle-age is approaching, and Guido has found himself in a rut, in all senses of the word. As he prepares to try and film his ninth film (hence the title NINE), he finds he has no inspiration to direct it. His marriage is sputtering, and his affairs are catching up to him. NINE is literally the story of how a man’s world crumbles around him, as he tries to hold it together with a quick tongue and a director’s smile, all the while attempting to find the child inside of him that helped him create such masterful works about being Italian he created years ago.

From a Musical/Broadway perspective I must say I was thoroughly disappointed. It spoke volumes to me, after the fact, that I was constantly more interested in the visuals and dialogue exchanges than the musical numbers. Songs that should’ve been show stoppers fell flat and reassured me that casting the Hollywood elite for a role that involves singing was not such a great idea. Penélope Cruz , Kate Hudson, Nicole Kidman and Judi Dench all sang and performed their musical numbers as though it were just a way to advance the seemingly endless and sporadic story. Stacy Ferguson’s (Fergie) “Be Italian” was the only true show stopper and was quite enjoyable but, unfortunately, it only lasts about a minute and a half.

Marion Cotillard was my vote for biggest disappointment. Her performance as Luisa Contini (Guido’s wife) was lacking and dull, and her musical numbers were soft and unenergetic. Her inability to command the lead female roll let’s the story simply drift past herself and the 5 other women in Guido Contini’s life, never establishing who (other than Guido) the story was ultimately about.

Across from her was Day-Lewis whom I thought was underwhelming, as well. He played a one-dimensional character, in Guido Contini. His emotions and development were limited, until the last 5 minutes of the film, and his musical numbers followed suit with nearly all the others. I was, for perhaps the first time in my life, unimpressed with his performance.

NINE is littered with sex. It’s practically paraded across the screen. Various scenes where women are revealed literally stripping down to the bare minimum in a musical number are numerous and are coupled with the theme of Guido Contini’s promiscuity and inability to devote himself truly to one woman. Although there is no actual nudity, the “showgirl” strip tease, stylized “sexual revolution” of NINE will leave you blushing, but if you want to get technical, there aren’t any scenes where the act of sex or body parts are shown. It’s more so the dialogue and visuals that allude to the idea and practice of sex that really drives the film’s PG-13 rating. Language is kept to a minimum, with fewer than 7 profanities, and there is no violence to speak of, but the sexual aspect more than makes up for this.

Perhaps the blame for why NINE doesn’t quite stack up lies with director Rob Marshall (director of “Chicago”) and his take on the musical, as his version doesn’t seem to have the imagination of the original and doesn’t take advantage of the fact that it’s a movie. Transitions between dialogue and music numbers get confusing, and, truthfully, leave the audience wondering why the music is needed at all. Although the visuals are stunning, and the composition is beautiful, Marshall’s story telling doesn’t quite suffice in answering the question: “What’s the point of all this?”

The biggest mistake that Marshall makes, in my personal opinion, is that he leaves out the essential ingredient of Broadway: Broadway singers. It is evident that what we are listening to, as these glamorous Hollywood stars are displayed, is not Broadway singing quality. Along with the poor vocal performances came Marshall’s choice of sets to accompany some of the songs that looked more suited for a Calvin Klein or Giorgio Armani commercial than a big budget musical.

Filled with sex and uninspired music, Marshall’s adaptation of “NINE” may leave you asking Hollywood to stop with the remakes and adaptations, because if he has truly shown us what it means to “Be Italian,” being Italian means being confusing, boring and unimaginative.

Neutral
Neutral—“Nine” was rather disappointing, especially coming from director Rob Marshall (“Chicago”). The biggest things it seemed to draw from its inspiration film “8½” was bad transitions between scenes and an overall downer of a storyline. However, I will say I would much rather watch “Nine” again than “8½,” even if other cinephiles rip me apart for such an affront. It had lots of interesting ideas, but they never quite came together to form a strong story. Things were only good when Guido Contini (Daniel Day-Lewis) was imagining things, which was basically when all the musical numbers happened. The main reviewer said the bad transitions (which I’ve already mentioned) left the viewer wondering why the music was needed at all. As for me, it left me wondering why the story was needed at all. The music was the good part. I would have much rather watched 50 minutes of great music than 110 minutes with not-so-great story mixed in.

The only real element that’s potentially offensive to Christians is the sexual element. However, I can’t rate this movie worse than “Offensive” because, firstly, the sexuality isn’t shown very graphically (even if it is present throughout the film), and secondly because the movies makes it clear that Guido’s lifestyle is very harmful for him. Profanity is sparse, violence almost nonexistent. Concerned parents should be grateful they would only have sex to explain, if they chose to take their kids to this film.

And there would be lots of great lessons to draw from this film: that marital unfaithfulness leads to marital unhappiness, that you aren’t happier just because you can sleep with whoever you want, etc. Lessons that are very, very, VERY clear in the film.
My Ratings: Moral rating: Offensive / Moviemaking quality: 2½