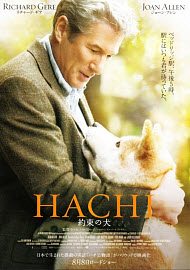 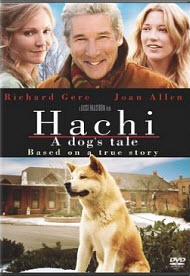 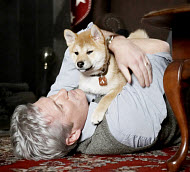 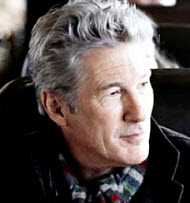 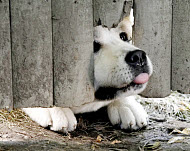 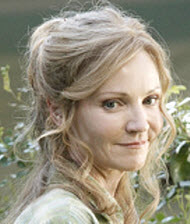 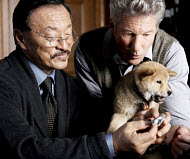 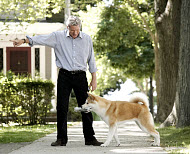 “A true story of faith, devotion and undying love.”

“Hachi: A Dog’s Story” is a heartwarming and inspiring family drama that tells the story of one dog’s unwavering loyalty and devotion. When college professor, Parker Wilson (Richard Gere), discovers a rather unlikely commuter wandering around the train station, he takes the adorable lost Akita puppy home with him. Parker and his new canine friend, Hachi (Hachikō), soon form a bond that cannot be broken. Hachi follows Parker to the train station every day and returns to the station every evening to greet his beloved master after work.

On one very sad day, Parker leaves for work and becomes deathly ill, never to return to the station again. Even after Parker passes away, Hachi faithfully returns to the station everyday for the next nine years, until his death, to wait for his beloved master. During those nine years, this amazing dog touches the lives of the vendors, the stationmaster, and the many commuters at the station square, as teaches them the true meaning of loyalty, devotion, and love. Hachi’s unyielding devotion and love for his master soon gains media attention, and this dog’s amazing story not only touches the lives of those at the station square, but all who learn about Hachi’s love and devotion. 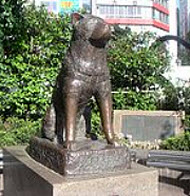 This film is an American adaptation of a true story set in 1925 Japan about a professor and his devoted dog, Hachikō. Today, a bronze statue of Hachi sits in the Shibuya Station in Japan in honor of his faithfulness and loyalty.

“Hachi: A Dog’s Story” is one of the most refreshingly clean films that I have seen in a very long time. This is the kind of movie that families can watch together without worrying if it is going to suddenly become crude or profane.

This film reinforces the principles of devotion, love, selflessness, and faithfulness, and its positive portrayal of a loving family reveres marriage and traditional family values. These fruits of the spirit and this film’s respect for family and marriage are brought to life through many sweet and tender moments throughout the movie. We see Parker and Hachi share a bowl of popcorn, as they sit on the couch together, while watching a Yankees game. Parker also gets down on all fours to try to teach the puppy how to play fetch. Viewers will be touched as they watch the bond of friendship and loyalty strengthen between this cute puppy and his newfound master.

We, also, see a positive relationship between Parker and his wife Cate (Joan Allen) and their college-age daughter. Their daughter invites her boyfriend over to her parent’s house for a family barbecue. The relationship between Parker and Cate is a stable and loving marriage of 25 years, and their commitment to each other can be seen in many moments throughout the film.

This motion picture not only holds up from a moral standpoint, but it also holds its own from a cinematic perspective. Director, Lasse Hallström’s choice of musical score, soft piano music, enhances the film’s pathos beautifully, and his creative use of black and white shots shows the audience Hachi’s perspective of the world around him. Richard Gere’s interaction with the adorable Hachi is a joy to watch and will put a smile on your face. The chemistry between Richard Gere and Joan Allen, as husband and wife, is also touching, as they believably portray a happily married couple, whose love for one another is lasting.

The film begins with Parker’s grandson, Ronnie (Kevin DeCoste), explaining to his class that his hero is his grandfather and Hachi, because their inspirational story has taught him the true meaning of loyalty. This incredible story of loyalty has not only inspired Parker’s family and the locals at the train station, but as viewers watch the many scenes of Hachi’s unwavering devotion, as he waits outside of the station in heat and snow, day and night, all while bringing out the best in the locals, you and your family will be inspired by this touching story, too.

There is really nothing offensive in this film, but I will mention the few things that may be slightly bothersome to some viewers. Parker and his wife exchange a few kisses throughout the film. It should be noted that these are not overly passionate kisses, but rather tender kisses exchanged by a couple in a loving and happy marriage. Parker and Cate sip on a glass of champagne together (they do not get drunk). Later, they lie in bed next to each other, as they talk about their love and laugh with one another. (These moments are not at all sexual in nature; rather they serve to portray marriage in a positive light.)

There is one misuse of God’s name, and one of Parker’s fellow professors tells him that the Japanese symbol on the small tag that he found around Hachi’s neck, when he picked him up at the train station, represents the Japanese number 8 (hachi or hachiko). He tells Parker that the number 8 (hachi) is a number of good fortune and the spiritual significance of 8 in Japanese culture reaches up to heaven and comes down to Earth.

Overall, this film brings a breath of fresh air into the secular film world, where so-called “family films” are all too often littered with crude jokes and mild profanities, but “Hachi: A Dog’s Story” does not resort to these offensive staples of the modern “family friendly” film. I highly recommend this well-acted and moving film about a dog and his master to audiences of all ages, because this film is not only a delight to watch, but its tender lessons of loyalty, friendship, commitment, and love, as well as its positive portrayals of family and marriage leave audiences with some important ideals to discuss with their families.

Positive
Positive—This movie was a excellent, although you will need a box of Kleenexes on hand! It has a wonderful message of loyalty and is based off a true story. It will make you appreciate and love your pet dog even more. There are no negative aspects as far as swearing, sex, etc. I haven’t seen a good, clean movie with positive family values in a long time. I highly recommend!!!
My Ratings: Moral rating: Excellent! / Moviemaking quality: 5

Sylvia, age 26 (USA)
Positive—I watched this film with my whole family (grandparent, spouse, kids ranging from 4 to 12) and am glad to recommend this wonderful movie.

While it is very emotional, and there was crying in the room (some of it by me!), I believe it was a positive experience and gave us some life lessons to discuss. In most regards, I agree with the main reviewer. Marriage was shown in a positive light and the expressions of romanticism were performed appropriately and again gave us good topics to discuss.

As far as moviemaking quality goes, it was well done with what I would consider “short story” material. Expecting a typical box office big screen “smash” will leave you a little disappointed.

I would encourage everyone to watch this movie for two reasons. The first is that it had a very touching story with family appropriate content. The second is that I like to see this kind of movie supported by our “vote” of participation therefore sending a message to Hollywood that movies of this style have merit and are worth producing. Be prepared to have some meaningful discussions with your family about life, love and loss. Enjoy.
My Ratings: Moral rating: Better than Average / Moviemaking quality: 4

Eric Bell, age 44 (USA)
Positive—“Hachi” is an unforgettable film; well acted and directed. And if you are a dog lover… indeed, if you have the slightest fondness for four footed friends, this is the tear-jerker to end all tear-jerkers. Knowing this movie was based on a true story made it almost unbearably emotional. The tears started for me midway and didn’t let up for quite a while after it ended. And not just tears but out-right sobbing at times. I haven’t been so moved by a movie in a long time. I highly recommend this film but be forewarned and have a full box of tissues at your side if you watch it. I would also suggest this film may be too emotionally sad for small children.
My Ratings: Moral rating: Good / Moviemaking quality: 5

Bonnie Childers, age 54 (USA)
Neutral
Neutral—We rented this movie because of it’s clean, family rating. However, I would caution viewers to the dramatic, intense feelings this provokes. The intense tragic and deep emotions this dives into hardly makes it totally kid friendly. It seem a bit of a heavy “suitcase” of emotions for some to carry. I must note one family member of ours is an 11 year old girl. The intense loss and tragic circumstance was a downward spiral of crying at our house. It may be the pre-teen emotions we’re dealing with here… but I was very bummed out as well. Not a light, cheery flick as some trailers portray… Kudos to Hollywood for the clean nature of the film. But would caution parents to consider emotional maturity of their viewers.
My Ratings: Moral rating: Good / Moviemaking quality: 4

Kay, age 43 (USA)
Negative
Negative—We saw this movie at Family Christian Bookstores and thought it looked good. We decided to rent it, first, and watch it. It is a movie that has good basic morals and supports family values. However, there is a scene at the cemetery that made me rewind and listen closer. The friend of Parker (Gere’s character) is saying the last words and includes the lines:

“I hear and behold God in every object yet understand God not in the least. Nor do I understand who can be more wonderful than myself. In the faces of men and women I see God. And in my own face in the glass. I find letters from God dropped in the street and every one is signed by God’s name, and I leave them where they are. For I know that wherever I go others will punctually come forever and ever.”

This is not what we, as Christians believe. We are not God, and He is not in every object. Who can be more wonderful than ourselves? God can! The end lines also make me think of reincarnation, which is something else Christians do not believe.

Yes, this movie is good in comparison to other secular movies, but it is not a Christian film.
My Ratings: Moral rating: Offensive / Moviemaking quality: 4

Kathy, age 37 (USA)
Comments from young people
Positive—Overall, this is a fantastic film. As I watched, I continually thought, “Wow, what a nice thing to do!” It is exactly the type of place I’d love to live in. Everything mentioned in “Objectionable Content” above is correct. There were a few elements that would have been preferably omitted. However, they are few and far between, and certainly don’t diminish the story of the film. I highly recommend the movie. It is indeed emotional, so perhaps not for younger viewers. But in comparison to the slapstick cheesy “family” films Hollywood makes today, this truly is a welcome change.
My Ratings: Moral rating: Good / Moviemaking quality: 4½

J.J., age 15 (USA)
Positive—I thought this film was very good. As a dog lover, at first I thought the dog was going to die, but then I found out how it was just as emotional when the owner dies. This film is by far the saddest movie I’ve ever watched but for some reason I love it. It makes you realize that animals have feelings too and how strong Hatchi’s bond was to his best friend. It is truly amazing how much that dog felt for his owner even after he was gone. I recommend this film, but please do not watch it if you are really light at heart, because you’ll be crying for days.
My Ratings: Moral rating: Good / Moviemaking quality: 4½