for strong, crude and sexual content, violence, language and some nudity. 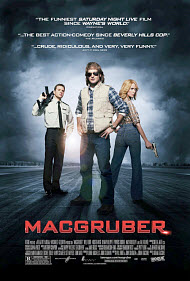 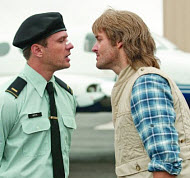 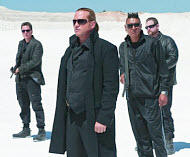 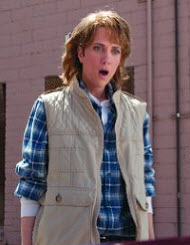 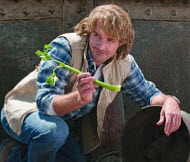 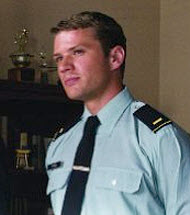 The television variety show “Saturday Night Live” has been around for 35 years, and during its run has spawned 11 films based on sketches from the show. From the downright awful “It’s Pat” which is considered to be one of the worst films of all time, to the critically acclaimed “Blues Brothers,” SNL movies have been hits and misses.

Over the past three years, SNL has had a recurring sketch called “MacGruber” which is based on the 1980’s television show “MacGyver.” The skit essentially has bumbling idiot MacGruber (played by SNL regular Will Forte) trying to defuse a bomb with household materials, eventually getting blown to pieces. Each sketch is about 60 seconds long and is amazingly stupid, but also quite amusing. For some reason, the folks over at SNL thought that this particular sketch would be perfect for their 12th film. Unfortunately, aside from a few funny riffs on 80’s action movies, “MacGruber” falls flat and should’ve remained nothing more than a 60 second bit.

The plot is as stupid as you can imagine, with retired army vet MacGruber being recruited to stop an old arch rival from destroying the world with a nuclear weapon. That villain, played well by Val Kilmer, will go unnamed in this review, due to the graphic nature of his last name. MacGruber and his two man team of Vicki St. Elmo (another SNL regular Kristen Wiig) and Dixon Piper (Ryan Phillippe) try to stop the attack.

As you probably already know, the plot doesn’t really matter too much. After all, it’s a film based off of a minute long skit. The plot serves as nothing more than a skeleton to hold up the ridiculous lines and grotesque sight gags that are to follow. “MacGruber” is R-rated and extreme in its content. There’s extreme language, over the top gore played for laughs, as well as multiple scenes containing graphic sexual references and nudity which is used not in a sensual manner but more to gross the audience out, which it does.

The one thing “MacGruber” does successfully is lampoon the 1980’s action movie. Directed by SNL writer Jorma Taccone, “MacGruber” takes shots at the “Beverly Hills Cop” and “Lethal Weapon” franchises, and some of the more humorous moments are when the film plays it straight in really ridiculous scenes with 80’s music blaring. “MacGruber” is more of a spoof on these films than on “MacGyver.” While this provides a few funny bits, they probably seemed funnier than they actually were because of how flat and disgusting the rest of the film was.

As a critic, when you see a movie as bad as this one with the prefix “Mac” in the title you immediately think of easy one word reviews like, “Mac-Awful” or “Mac-Terrible” because a movie this bad deserves a pun to match. Watch one of the SNL sketches and you can see the humor, but you can also see why it would never work as a film. Graphic, profane, and just plain useless, “MacGruber” doesn’t make a smooth transition to the big screen.

Negative
Negative—I decided that I would ONLY see this movie to warn others about how bad it may be. I knew it was going to be bad but it was worse than that. It was so bad that I literally walked out of the movie within the first 15 minutes. It was the first movie that I have EVER walked out on in my life. The language was so vulgar and perverted, and I regreted even thinking about watching this kind of junk!

And the comedy in it was not funny at all, in fact, it was rather disgusting… Please save your money and time because this movie certainly does not deserve it.

Zachary, age 19 (USA)
Comments from non-viewers
Negative—Phillipians 4:8—Finally, brothers, whatever is true, whatever is noble, whatever is right, whatever is pure, whatever is lovely, whatever is admirable—if anything is excellent or praiseworthy--think about such things. This verse says it all. Do not watch this movie…even to say that “yeah its bad, or I only watched it to educate other people”… Satan is very smart (a whole lot smarter than our carnal minds), and allowing this filth into our minds gives him a foot hold. Apply this verse to every tv show, movie or magazine we look at.