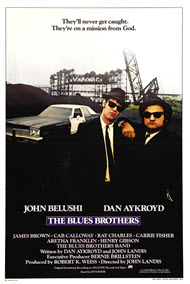 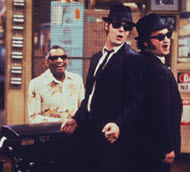 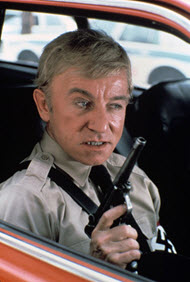 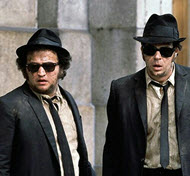 “TWhe Blues Brothers,” depending on who you ask, is one of the great American movies. Originally based on a “Saturday Night Live” sketch, the Blues Brothers are Jake (John Belushi) and Elwood (Dan Aykroyd)—two convicted-felon musicians on a “mission from God,” as Elwood says, as they jam away at old Wilson Pickett tunes.

Actually, their “mission from God” is to help save a church orphanage from foreclosure. That’s easily forgotten, given this movie’s mixed message of religion. A lot of Christian audiences may be offended with the initial scene where Jake and Elwood swear at a nun, then walk out of that church and head to a lively Baptist mass. Yet, the Blues Brothers' motivations are undeniably well-intentioned: To help a church.

Jack and Elwood want to get the band back together for this very reason. (“we’re on a mission from God,” Elwood repeatedly insists.) So, they track down the other band members—at a soul food cafe, at a restaurant, at a Holiday Inn lounge, and so on.

“The Blues Brothers” still plays at college campuses around the country, and for good reason: It’s a fun movie. While it’s rated R for some profanity, the funniest scenes are clean. (“Are you cops?” one of the bandmembers' mother asks them in one scene, to which Elwood responds, “No, ma'am, we’re musicians.”) That’s aside from all the inside jokes about Chicago and the state of Illinois.

Incidentally, there are numerous cameo appearances here: The Godfather of Soul himself, James Brown, plays a Baptist minister; Aretha Franklin as a waitress; Ray Charles as a music shop owner; the late John Candy as a cop; British supermodel Twiggy; and, in one of the most pivotal roles, Steven Spielberg (yes, that one) as the county assessor who stamps the check that saves the church orphanage.

CONTENT WARNING: “The Blues Brothers” is rated R for swearing. The four-letter words clock in at nearly 40 instances, with frequent crude phrases and Lord’s name taken in vain six times. Some of the bad guys Jake and Ellwood tick off are the local Klan (a few racial epithets slip by). There is also some violent explosions and gun play, courtesy of Carrie Fisher. The most pervasive questionable content by far, however, is the nonchalant attitude toward beer and cigarettes.

An alternate recommendation for Christian audiences may be the original “Saturday Night Live” videotapes from TV featuring the Blues Brothers. The sequel, “Blues Brothers 2000,” was released in 1998.