for exotic dancing and some language. 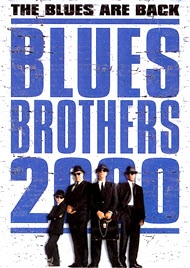 Featuring a star studded cast of performers, “Blues Brothers 2000” follows its predecessor, “The Blues Brothers” (1980), in image and intent but fails to regain the spirit of the original film.

Dan Aykroyd, reprising his role as Elwood Blues, is released from prison and finds himself alone after learning his brother Jake is dead. While grieving he realizes that all the family he has is the blues. Elwood then sets out to get the Blues Brothers Blues Band back together. In doing so Elwood befriends Buster (J. Evan Bonifant), an orphaned boy, and Mack McTeer (John Goodman), a bartender. Together they form the men in black of the band. They set out for their first gigs and soon find they are being pursued by the police, the highway patrol, and the F.B.I. Like the first movie, the band finds ways to evade and avoid the authorities in order to play their gigs. The movie culminates with an all-star jam session featuring Eric Clapton, B.B. King, Bo Diddley, Travis Tritt and many other accomplished musicians.

The Blues Brothers without John Belushi is less captivating. Aykroyd and Belushi had a chemistry that the new characters do not replace. These new members seem to shadow Elwood and rarely show distinct personality. Quotable lines are less frequent. Still, the band’s antics to get out of tight situations carry the plot. The lifeblood of the film lies in the musical numbers interspersed throughout. Aretha Franklin, James Brown, Wilson Pickett and even Jonny Lang all make stellar performances. In addition the band does a terrific rendition of “Ghost Riders in the Sky.”

As enjoyable as “Blues Brothers 2000” may be at times, it contains scenes involving exotic dancing of scantily clad females. These incidents occur exclusively in the first half hour of the movie mostly to show the depravity of one of the band members. Also “Blues Brothers 2000” presents a somewhat confusing picture of God. Elwood proclaims throughout that “the Lord works in mysterious ways.” Indeed this message has validity. But when used to explain the voodoo practiced by a character at the end of the movie, this phrase betrays the God who condemns witchcraft and the practice of magic arts. The voodoo practices of a character at the end of the film could alarm and confuse younger children. The constant evasion of the police also sends a mixed message about respect for authorities and moral behavior.

Neutral
Neutral—If you like the Blues you will enjoy the music. The plot is thin and similar to the original “Blues Brothers” movie. I’m sure some Chrisitians will be upset by the scantally clad women in the first part of the movie, the cussing, taking the Lord’s name in vain, and the somewhat tame voodo references at the end of the movie (and rightly so). I agree that for those who don’t think they want to view the movie but like the blues it may be better to spend your money on the CD. Never-the-less, I really enjoyed the music and there were many unobjectionable sections in the movie. Finally, this is not a movie that should be seen by young, pre-teen, or young teen age children.
Robin Wagner, age 46
Neutral—Plot was thin, the tent revival scene was very strange, the language and strip club was a little much, but the music was incredible. I’d probably save the 6 bucks for the movie and put it toward the soundtrack if I had to do it again, but it was an enjoyable two hours.
Lane Denson, age 25
Negative
Negative—Very disapointed, music some what good, at times offensive. Language was offensive and near nudity of dancers offensive was offensive. Would not see, especially not for children. We walked out of movie. Saw other people walk out. Story plot lacking.

Bottom-line Overall rating: don’t bother to see, you are wasting your money. Morality or message non-existent. Not recommended for any audience.
Elizabeth Frazier, age 53
Negative—DON’T WASTE YOUR TIME ON THIS MOVIE! Everyone seems to comment that the music was great. And the MUSIC was. But what about the lyrics and content?? In progression: a musical scene in a strip bar; the next song with a chorus line “Cheaper to keep her” (talking about their wives); a church scene which portrays christians in a very poor light; a stage scene dramatized by skeleton horse and rider cavalry breaking through the clouds above; and a musical competition in a voodoo lair where the singers are possessed by the resident witch.

Any one of these scenes might be tolerated if they were the sole offensiveness of the film, but put together I felt as a christian that I was enduring mockery by the director. My wife walked out, and for the first time so did I, just before the end. This movie had great potential. Instead, it was a complete insult.
Todd Adams, age 30