for mature thematic material involving human trafficking, and some violence. 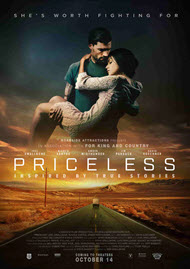 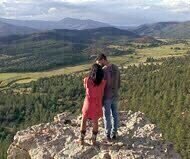 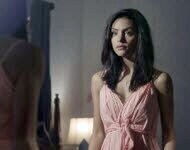 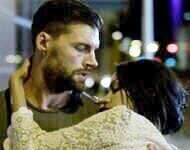 Because we are made in the image of God, every person’s worth is priceless.

death of a wife

being unable to hold down a steady job

losing custody of a child

being courageous and selfless

taking action to help those in need

prostitution mentioned in the Bible

“She’s worth fighting for”

James, played by Luke Smallbone of For King and Country, is a good man who has had misfortune befall his life. His wife has died, his temper has gotten the best of him, and he’s in need of money. He takes an easy job—drive a box truck cross country, ask no questions, and get paid. He doesn’t know what he is hauling at first, but, after falling asleep at the wheel and getting run off the road, he hears noises from the back of the truck. When he opens it, he finds two women, Antonia (Bianca Santos) and her sister Maria (Amber Midthunder). After letting them sit up front and taking them to eat, he delivers the girls to their destination, but clearly has misgivings about it. His gut tells him what he doesn’t want to believe—that he just delivered these girls into human trafficking.

Tired from his drive, he goes to spend a night in a hotel and meets the owner, Dale (David Koechner) who tells him to leave his property, when he sees the box truck. In time, they end up becoming friends and allies, as James tries to find Antonia and Maria. What follows is a dangerous attempt to find the girls and free them from human trafficking.

This is a powerful film that tactfully dealt with the subject of human trafficking. While there certainly is content that talks of prostitution—phrases such as “worth of every penny” have a double meaning. James says this in reference to Antonia’s worth as a person. The trafficker uses this phrase in a much more demeaning manner. Prostitution is part of the film. It is obvious Antonia has to have sex at least once—an initiation. Antonia is shown in the bed, covers pulled up to her chin and the man buttoning his shirt. Drug use happens in the film, as another woman offers some to Antonia to help her get through the next few days. Garo, the pimp (Jim Parrack) has her drink alcohol. There is violence, gun use, a shooting with blood, a dead body and a bar room brawl.

This is a tough topic, and, while there is no way to show this movie without showing the ugly side of this life, it is done as tastefully as could be, while maintaining a PG-13 rating and adhering to being a film that upholds Christian morals. It is a moving film and never are the evil perpetrators portrayed in a positive role. Illicit sexuality is not praised and flaunted, as in many movies today. Through it all, Antonia holds to her faith, even as she deals with horrific circumstances.

If you purchase the film, you will get bonus footage such as For King and Country concert footage, behind the scenes of how this film was made and why, plus interviews with the cast and crew.

One thing that is very apparent is the utmost respect Joel Smallbone and his brother Luke have in real life for women. Clearly this view must be shared by Ben Smallbone, who directed the film. Having seen their sister Rebecca St. James in concert years ago, I know she strongly taught the importance of saving one’s purity for marriage. Respect for women and for one’s purity clearly has been passed down through this family, and it’s so refreshing and moving to hear men speak of women with such respect, and to urge them to not settle for anything less—and state that chivalry is not dead. It’s such a positive message that all need to hear, telling our young men how they should treat women, and our young women how they deserve to be treated.

I highly recommend this movie. Given the subject, I don’t recommend it for children or pre teens. I’d leave it to the discretion of parents as to whether you think this is a movie your teen should view. In the end, the viewer is pointed to God and to valuing life and women. It leaves a strong impact. Well done. (I’d even recommend purchasing the CD by For King and Country.)

Positive
Positive—The movie is based on Human Trafficking. That being said, to make it viewable for our Christian eyes had to be challenging, I would imagine. However, I found they were able to get the point across and to do it tastefully. The movie was impressive. Christian movies sometimes have a tendency to be a bit corny; “Priceless” was not. It was indeed intense. Great acting and script. It was endearing.

Go support Christian movies, so they can make more, instead of supporting movies that have fundraising events for fighting everything in which you believe and stand for. Darkness hates the Light. Keep shining bright.
My Ratings: Moral rating: Good / Moviemaking quality: 5

Louise, age 50 (USA)
Positive—I really enjoyed this movie and would recommend it! I was concerned that, considering the topic, there might be some parts I wouldn’t want to see, but, although intense at times, the makers did a good job keeping the movie clean. I loved the ending :)
My Ratings: Moral rating: Excellent! / Moviemaking quality: 5

Ted Baehr, Movieguide
…Priceless does an admirable job of helping us see and sense the danger of the carnal world of human trafficking while still steering visually clear of its true horrors. It's a well-acted and involving story… [4/5]