for language, some violence and disturbing images. 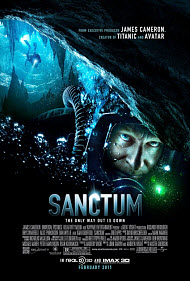 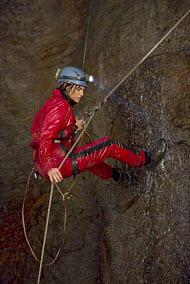 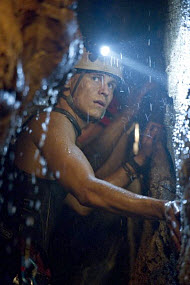 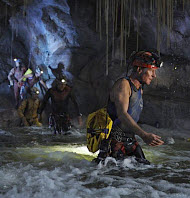 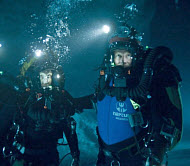 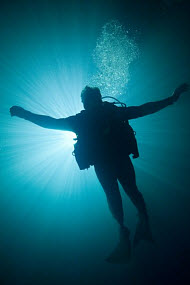 caves in the Bible

“Panic is the vulture that sits on your shoulder.”

euthanasia of the mortally wounded—mercy drownings

“The only way out is down.”

In 2009, filmmaker James Cameron released “Avatar”, which has since become the number one film in American box office history. Cameron used a 3D camera system that he helped invent, and while some argue the merits of “Avatar” as a film, no one argues that it was a stunning technical achievement. This new 3D process was immersive and a marvel. It was, also, very lucrative, which meant that, for better or worse, “Avatar” ushered in an era filled with 3D movies.

While this era has produced a few great 3D movies, most have had problems. Some movies like “Clash of the Titans” and “The Last Airbender” did not use Cameron’s technology and just wanted to capitalize on the profitability of 3D. Other films like “Resident Evil: Afterlife” did use the technology, but were poorly made. The new cave-thriller “Sanctum” not only uses the technology made for “Avatar,” but also carries James Cameron’s name as a producer, so it can’t help but be great right? Unfortunately, it can.

Loosely based on a true story, “Sanctum” is the story of a billionaire, played by Ioan Gruffud from “Amazing Grace,” who pays an expert cave exploration team to explore the last unknown cave in the world in Queensland, Australia. They believe that deep in the cave, they can discover a passage to the ocean. As you might have guessed, trouble ensues, communication is lost, and the team is stranded at the bottom of the cave with minimal supplies and must find their way out.

The plot to “Sanctum” is nothing more than a skeleton to hang pounds and pounds of effects on. It reminded me of the old Jackie Chan movies, where the plot was little more than a device that moved the talented Chan from stunt to stunt. Also, it is clear that little time went into the script and character development. For this film to work, the viewer needs to care about the characters and resonate with their plight. Neither of those things happens in the film, and that is thanks to one-dimensional characters and a terrible script that contains laughable dialogue. The only lines in the movie that are not hilarious are those that are intended to be.

The one aspect of “Sanctum” that can be commended is the effects. Emplying the same technology used in “Avatar,” the film bursts on the screen and surrounds the viewer in the world of the characters. If you are a rock climber or deep sea diver, the film delivers an experience that has probably never been seen before on film. “Sanctum” was shot on location in Australia, and viewing this film in IMAX 3D almost made it worth the price of admission. Almost.

Along with being poorly acted, directed, and scripted, “Sanctum” earns its “R” rating with some unnecessary content. While most of the film takes place in a cave, some violence and gore is expected. There are several deaths in the film that are shot up close and are gruesome. From drowning to skin peeling off of bone, the camera lingers, and the viewers see the deaths up close. Also, there are two assisted suicides in the film which raise a completely different set of questions for viewers. Along with the violence, there is one brief shot of a male’s rear end in a scene that is played for humor, but falls flat. Also, strong language is present throughout the film, that includes, but is not limited to, over 20 f-words, as well as many uses of God’s name.

“Sanctum” does include a story arc between a father and son that are both in the cave. With some more development, this arc could have been the saving grace of the film. Unfortunately, it isn’t, and the viewer is left with a film that looks great, but is a mess to watch. Outdoor-adventure minded viewers might enjoy “Sanctum,” but for everyone else, there are plenty of other 3D options at the cinema that will gladly take your money.

Negative
Negative—This movie had every chance to be a great movie but missed them all. The scenery was awesome. The 3D was like being there. The actors were good too. Where did this movie go so wrong. The opportunity to develop a believable father son relationship was ruined because the dad didn’t understand a thing about his son through the movie and ending. There was no believable love between them, just huge gaps that never resolved.

Underdeveloped scenes that had great potential (like dying for the sake of the group were left to shrivel on the vine. The so called mercy killings never had closure… they were just ugly and unmeaningful.

Dale L, age 50s (USA)
Negative— This movie contains suicide, assisted suicide and manslaughter. I usually love action movies and can overlook a good bit of violence… but this movie was disturbing in its lack of respect for human life. Typical Hollywood garbage from the super liberal Cameron.
My Ratings: Moral rating: Extremely Offensive / Moviemaking quality: 3½

Cat, age 40 (USA)
Negative—This was a very disappointing movie. While the trailer and opening sequence promised something powerful, psychologically profound and perhaps even offertory of a forthcoming wellspring of inspiring insight into adventure exploration and tense survival, within minutes of the opening dialogue one realizes this is going to be a movie immersed in predictability, cliché, cold acting, and expletives filling the poor dialogue gaps as the director can’t muster anything else for emphasis (though swearing is a common phenomenon in real-life adventure stress).

Other than that, the scenes later with the almost hilarious, but morally reprehensible adventure-tragedy mercy killing and suicide, made me want to grab a rebreather—or take the movie back. So, give me a break someone. Did anyone try this movie before a test audience, or was Cameron just helping out his dive-buddy, Wright, and Cameron’s name was meant to pull in the audience? The only way out is down apparently, and if that’s hell, Garvin’s script goes deep.

“The Nullabor Dreaming” (1988) feature on the DVD was the only thing I enjoyed, for which I realized “Sanctum” was all-so-very-loosely based on the truth, at best. I can see what inspired this movie, but “Sanctum” had no inspiration for me. Emotion and cognition, in proper balance, are the hallmarks of successful adventure exploration and survival, along with humility. When faced with imminent death, or where suffering, worry and death might be protracted, many turn to God and prayer. The only way out is up, and that takes belief and trust.
My Ratings: Moral rating: Very Offensive / Moviemaking quality: 2