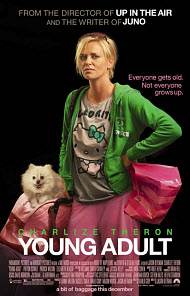 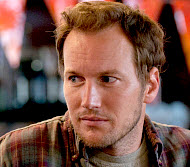 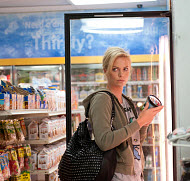 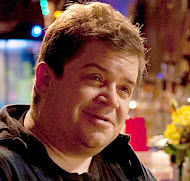 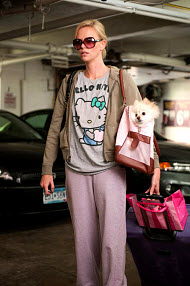 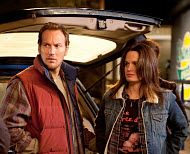 “Everyone gets old. Not everyone grows up.”

Jason Reitman and Diablo Cody again team up to deliver one of the year’s better movies, this time with “Young Adult.” The talented pair gave us the beloved “Juno” 4 years ago, but don’t go in to “Young Adult” expecting a lovable lead character who brightens the day of everyone she comes into contact with. In fact, the film’s main character Mavis Gary might just be about as anti-Juno as a lead character can be.

Mavis (Charlize Theron) is an alcoholic ghost writer of a once-popular series of YA books, who left her small Minnesota hometown of Mercury for the big city of Minneapolis, upon becoming famous—and never looked back. That is, until she receives a mass e-mail announcing the birth of a baby to her high school sweetheart Buddy (Patrick Wilson) and his wife Beth (Elizabeth Reaser). She packs her bags, makes up an excuse about needing to take care of some “real estate” business back home, and hits the road for Mercury, to recapture her glory days, and recapture her former love.

When she arrives home, she immediately calls Buddy, inviting him out for drinks. He takes a rain check, having baby duty back home, while his wife’s band (Nipple Confusion) practices for an upcoming gig, so Mavis is forced to drink by herself. While at the bar, she is recognized by Matt (Patton Oswalt), a guy she went to high school with and had a locker right next to. He can tell immediately that she doesn’t have the slightest clue who he is; he was never one of the popular ones she spent all her time with. But, when she sees the cane next to his bar stool, she remembers exactly who Matt is (“You’re hate crime guy, aren’t you?”). While Mavis had been popular in high school for her looks, Matt had gained “popularity” for being savagely beaten by a group of jocks who thought he was gay. The two form a friendship that seems unlikely on the surface, but both are wounded alcoholics whose entire lives are dictated now but what happened to them in high school.

Mavis sets her plan into motion to win back Buddy (promising they can “get through this together”—referring to Buddy’s wife and newborn, like treating cancer or something), but is met with opposition from her new drinking pal Matt, who suggests she get therapy, instead of trying to wreck a happy marriage.

The content of “Young Adult” is strong and not in any way intended for young adults, which is a shame, because there are valuable lessons that can be learned from this film. Unfortunately, there are over 15 uses of the “F” word, and many other colorful uses of sexual slang. Mavis is mean-spirited, and treats nearly everyone around her as being completely inferior. She drinks, a lot, and most of the time she spends with Matt involves them drinking. She often wakes up with hangovers. At one point, she admits to someone she is an alcoholic, to which that person replies “Don’t joke around like that.”

We are never subjected to any flash-back scenes showing Matt’s beating, but the descriptions alone will make some cringe. The sexual content is strong, although most of it is implied. There is no nudity in the film, but we do see Mavis in various stages of undress throughout. She has sex twice during the film (all implied, not shown), and speaks crudely to Buddy and Matt about things she used to do back in high school.

Mavis lives in the past, recreating her youthful popularity through the main character of her books, which have now been relegated to the bargain bin at the Mercury bookstore. She dreams about how things used to be, even wearing Buddy’s old high school sweatshirt around town. While most everyone still admires Mavis for being the one who “got famous and went to the big city,” and while she plays that part to fool the people around her—and often herself, deep down she is miserable with how life turned out. She sometimes notices this, herself, but rarely acknowledges it to anyone. She is hopeless, and while we know this is just a movie, it’s hard to watch it and not think of people in our lives who are just like her, who struggle with finding purpose in life and who always wish things would change for the better.

She seeks a relationship, something that will fulfill her and give her life meaning again, as do so many of us. And yet, unlike Mavis, we can have hope through a saving relationship with Jesus Christ, who came to forgive us, to save us from the miserably depressed lives we lived, and to give us a future and a hope. She may be a mess, but weren’t we all, at some point, before God extended to us some pretty amazing grace?

If “Young Adult” sounds a bit depressing, that’s because it kind of is, but in a completely mesmerizing sort of way. Watching Mavis is like watching a train wreck, horrifying and fascinating, all at once, but the remarkably gutsy performance of Charlize Theron keeps our eyes glued to the screen, throughout. She is not a likable character, by any stretch of the imagination, but she elicits pity and sympathy from us, and we desperately want her to see herself the way we see her.

Patton Oswalt is equally as good as Matt, and every scene with his lovable, but deeply wounded, character is perfectly executed. These are two of the year’s strongest performances. And one of the film’s final scenes, a conversation between Mavis and Matt’s sister Sandra (Collette Wolfe) perfectly displays what fuels a person like Mavis to continue being… well, a person like Mavis. It may be the best scene in a movie full of great ones. The dialog is sharp and bitter and, at times, very funny, which is exactly what we expect from screenwriter Diablo Cody, who may have given us a stronger script than she did with “Juno.” And, while I have heard some people complain that this film is bleak, especially considering it is from director Jason Reitman, I have to remind them that of his four brilliant films (“Thank You for Smoking,” “Juno,” “Up in the Air,” and now “Young Adult”) “Juno” is the only one that will likely leave you smiling afterwards. But life isn’t always hamburger phones and knee-high gym socks, as “Young Adult” so potently proves.

Negative
Negative—This is a fairly well-written, well-performed, but depressing and somewhat boring movie about an extremely selfish woman. Beautiful and talented, she lives a sad, lonely, depressed and pointless life. A good example of what living without God is like. The movie unfortunately focuses very narrowly on this main trait of her character, which is to be totally self-centered with no consideration whatsoever of anyone else. There is very little substance to her life and not enough substance to the movie.
My Ratings: Moral rating: Offensive / Moviemaking quality: 4