for mature thematic material, and teen drug and alcohol content. 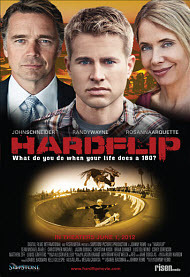 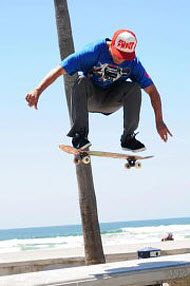 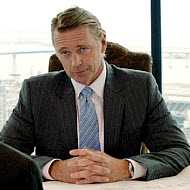 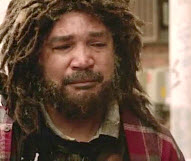 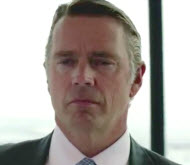 lack of a father

Sometimes the hardest reviews to do are the ones that don’t hit me: movies that are not on either end of the spectrum—where I loved it, or I hated it. A movie that just fits in the middle, that is the hardest for me to review, because the passion doesn’t stand behind it.

While I applaud the effort and message of this film, it fell flat, for me. To be fair, I’m not the audience it’s aiming at (teens, young adults, skaters), and I don’t have a personal interest in skate boarding. In fact, I had to refer to the Internet to become familiar with brand names seen on clothing and skate boards, and also to look up names of people in the film, who it turns out, are popular in the skating world. So a young person may find this film a lot more interesting than I did, so don’t rule it out based on the opinion of a 40 year old.

“Hardflip” chronicles the life of a young man named Caleb (Randy Wayne—“To Save a Life,” “The Dukes of Hazzard: The Beginning”). His single mother does her best to raise him and give him Christian values, but she, herself, struggles with alcoholism. Caleb is unaware that his mother is seriously ill, and his life is turned upside down when his mom succumbs to her battle with cancer. Left on his own, he looks for his biological dad Jack, played by John Schneider. Feeling abandoned, all these years, has left Caleb bitter—bitter towards his father and towards life. Caleb enters a skating competition in hopes of winning the cash prize, so he doesn’t get evicted. Through this, he meets some new friends in the skating community—some good friends and some poor influences. There are many scenes of Caleb skating and performing tricks, as well as others, at skate parks, so this may appeal to a certain teen audience. We follow Caleb and his struggles with his relationship with his mom, and his helplessness when she is gone, leaving him on his own and having to grow up and make better choices.

The movie shows the effect on the life of a child/teen when a parent, in this case the dad, is not involved in the life of their children—the bitterness, anger and search for acceptance in less than desirable places. It also shows the real life struggles Christians go through in our flawed lives. We don’t think a Christian can be an alcoholic or a single mom, but the film shows the raw side of life. It shows the reality of how Christians are not exempt from difficulties, poor decisions and addictions.

I think my favorite performance in the whole film is that of Brian Sumner, who is a professional skater. After finding out who he is, I am impressed by his faith in God and the way he integrates his love of God into his love of skating. He is involved in various ministries. From his short performance in the film, he seems to be an engaging young man. In addition, I looked up Christian Hosoi, who also appears in the film. He, too, is a professional skater, but he struggled with a drug addiction and an arrest. He turned to Christ through his arrest and is now the Associate Pastor of a church in California. In a videotaped testimony, he says,

“I have experienced every level of love that the world has to offer, and there is no love like God’s love.”

Caleb uses the word bast*@ when referring to himself, since his parents were not married. There is also teen drug and alcohol use in this movie, and alcohol use by adults, but, in my opinion, the message of this movie is redemption and healing. It is about the power of God to change lives and renew relationships and about making the right choices.

I think it’s a good film, and, again, although I did not love this movie, I think it’s a great film for teens and those interested in skating. I think it can also bring an interest into the real life people who appear in this film and be used as an opportunity for others to hear testimonies of what God can do.

Kristi Ruiz, age 38 (USA)
Positive—I thought it was good. …however it is predictable, and the plot is not developed completely. It leaves many questions unanswered, but it was still a good movie, without any foul language.
My Ratings: Moral rating: Good / Moviemaking quality: 3½