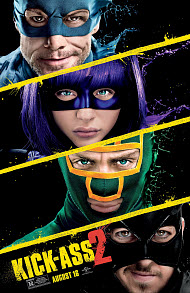 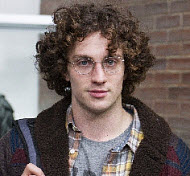 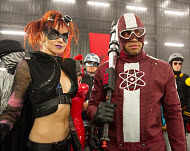 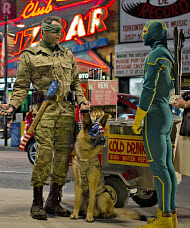 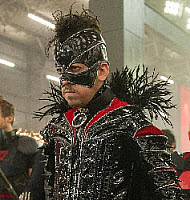 lying to a parent

loss of a parent

Of all the movie reviews I’ve had to do over the years, this is both the easiest and most difficult to write. The easy part is the suggestion of whether or not this movie is acceptable for Christian viewers; I think the title says it all. If you are offended by the title, this is probably not the movie for you. On the other hand, I always try to find some redeemable qualities in the movies I view, and this film made it difficult to find something positive.

This film is a sequel to 2010’s “Kick-Ass.” Many of the same characters return: Dave Lizewski, aka the title character Kick-Ass, Mindy Macready, aka foul mouthed Hit-Girl, and Chris D’Amico, formerly Dave’s friend and Red Mist, is now the vulgarly titled villain, the Motherf***r. New characters joining them are Colonel Stars and Stripes (played by Jim Carrey) and Dave/Kick-Ass’s new love interest, Night B***h. There are many other new superhero and villain wannabes thrown into the mix, and most of their names are just as uncouth as the others.

The plot this time revolves around Dave and Mindy trying to give up the superhero life. Unsuccessful in the attempt, Dave joins the Justice Forever team led by Colonel Stars and Stripes and made up of several new heroes. Chris D’Amico, formally good hero Red Mist, emerges as a new super-villain and forms his own team of villains. Because of this new group and their brutal acts, the police set out to arrest any costumed people. When the team of super-villains kidnap Dave, Mindy reemerges as Hit-Girl to save him. Kick-Ass and Hit-Girl reunite to take down the new villains and restore the good names of superheroes.

The inappropriate content in this film is too numerous to name. The violence is over-the-top and gratuitous, but done in a quick comic book like action style. There is hitting and kicking that draws blood, beatings, stabbing, shooting, throat slashing, bone breaking, electrocution, and an attempted rape. The sexual content is extreme, but the only nudity is a brief shot of two women topless. Teenagers have sex, though nothing graphic is shown, and discuss sex throughout the film. This film is also just as vulgarity laced as the first. There are around 50 f-words and at least 20 uses of other vulgar words.

There is not much redeemable material in this film. There are strong friendships and relationships and friendships tested by the trials they go through. Dave and Mindy stand up for each other but are not necessarily good role models. This film, like the first, lacks anyone who could be put forth as a positive role model for young adults. I remember enjoying the first film because I thought the violence and foul words coming from a young girl were funny. I hate to admit, but I enjoyed this film while I was watching it, as well, becoming submerged in the action. But as a more mature Christian, I would never want my children to watch either of these films and mimic the behavior presented. These movies are colorful, quick, and action packed, but there are many better and more positive superhero movies available today.

There are many Bible verses that apply to whether or not someone should view this type of film, but the one that kept springing to my mind was Proverb 4:23:

Above all else, guard your heart, for everything you do flows from it.

Putting violent images in our heads is not the best way to keep our hearts Christ-centered. As I said, if you like the action filled superhero movies, there are many better choices available with move positive characters.

Comments below:
Positive
Positive—“Kick Ass 2” is the rare sequel that improves on the original. Most of the main characters are back, and the actors do a great job. There are some new interesting characters, including Jim Carrey as a Christian superhero. The film is for adult audiences and contains strong profanity and a fair amount of graphic violence. If you were offended by the first “Kick Ass,” then you should skip this one. If you can handle the language and violence, then it is worth checking out.
My Ratings: Moral rating: Offensive / Moviemaking quality: 4

Steve Allaby, age 33 (Canada)
Positive—Not nearly as violent as its predecessor, but just as emotionally charged. The acting was great, especially from Carrey and Mortez. The Mother-F*cker’s character accurately displayed today’s narcissistic youth, who think they are invincible.

What I like about the Kick-Ass movies are that the characters are much more complicated than meets the eye. Mindy Macraey isn’t just a 12 year old assassin. She is a disturbed girl whose father was a psychopath and has seen and done more than anyone should do in their lifetime. All in all I suggest this series. You may think you’ll hate it but you’re very wrong. There is more to this series, and these movies than meets the eye.
My Ratings: Moral rating: Offensive / Moviemaking quality: 3½

Nicholas Angel, age 33 (USA)
Neutral
Neutral—The profanity used by criminals in Kick-ass II is an honest portrayal of what to expect when dealing with criminals. The whole movie, I suppose, was an attempt to get feedback and start debates on whether it is okay to wear a mask and fight crime. In the movie, K-ckass II, a “born-again” Christan hero, Sarge, violently attacks a prostitution/slavery ring and kills slave owners. The money saved from the illegal bust is given to the freed slaves at the end of the war on slavery scene. Is that okay? Can we all do without the 5th amendment? Someone has to deal with these issues, and K-class 2 does. And the villain who kills the “Born-Again” vigilante is an escaped criminal from Russia who wears two sickles and hammers on her bikini top to symbolize how Communists treat children.

The movie seems to be a critical re-evaluation of Marvel’s masked heroes. Before anyone puts on a mask at fights crime, they should watch these K-ckass movies, even if they are Christian children above the age of 14. Angry but law-abiding people are who the movie was written for, to help them think about the cost of fighting crime.
My Ratings: Moral rating: Average / Moviemaking quality: 4

Matthew, age 50 (USA)
Comments from non-viewers
Negative—…it’s bald-faced reveling in sin… like every comedy movie now (…even in family-friendly movies). …at least the more innocent minded Christians (who eat, breathe, and sleep all things beautiful and Godly) have a… tragically vivid heads-up about how messed up the world is (lol?). … but at the same time… what if there are Children lurking in your movie area?… what if, like me, they see how nasty the movie is, and they develop an obsession? From an early age, I had been exposed to movies like “Friday the 13th,” catching glimpses of the nudity, before my mom would cover my eyes. … I also had a babysitter who watched those movies, and didn’t care. …I know it’s a cliché… but, think of the children (lol). Unedited R movies develop obsession… porn cultivates it… and it produces rotten fruit. … but yeah… if I’m wrong… my bad. Keep letting parents know what kind of content we’re getting in our movies. … though, I’m pretty sure parents would automatically know, just by this movie’s title that… yeah, we probably shouldn’t see that one. …