for language, including some suggestive references. 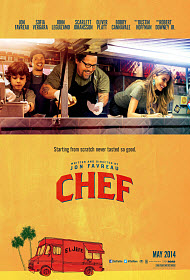 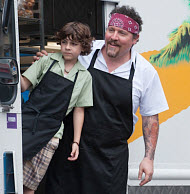 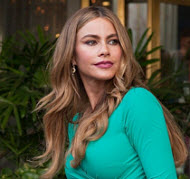 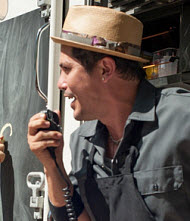 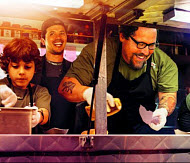 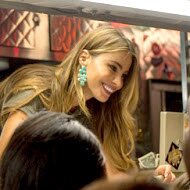 cooking in the Bible

foods in the Bible

dads who fail to know their kids well

“Chef” begins as a story about a talented chef (Jon Favreau as Carl Casper) who struggles with a controlling boss (Dustin Hoffman), the safety of employment over the adventure of self-employment, and the importance of a relationship with his son from a previous marriage. Hence “Chef” confronts a mouthful of popular and important, practical cultural issues. This is followed up by a lot of food imagery bound to please foodies everywhere.

“Chef” is a good story written from the heart, but it contains enough guy humor, foul language, sexual and sex organ reference to be at home in the stinkiest of high school college locker rooms. There is some pot smoking, cigar smoking and, in general, a lot of mature content. Visually, the movie contains no sexuality save some tight fitting and sometimes low cut dresses.

This film is geared toward adults and perhaps secular/initiated older teenagers. It has merit, entertainment value, and is heart-felt, but at the very least, it’s for a mature audience.

Comments below:
Positive
Positive—A good happy ending film. Not wanting to be a spoiler, so I will not say more. Ignoring the swearing, it was an OK film for an adult Christian to watch, I think. No sex, violence, the occult, etc. Given the limited choice of “acceptable” secular films on offer, it did fall into that category.
My Ratings: Moral rating: Average / Moviemaking quality: 4

Tony Nz, age 55 (New Zealand)
Neutral
Neutral—I work with construction people all day, so the language was fairly normal for that crowd. BUT for this movie it ruins it for the normal audience. The movie itself was a pretty good story, with restored relationships and an emphasis on commitment. Other than the language and some adult type situations, it would be a good family movie. The characters were endearing and honest, but honesty doesn’t require dropping the “F” bomb like it’s a normal part of the vocabulary.

It is not a movie that I would watch again, but it would be except for some situations and language. A shame to ruin an otherwise good movie with stuff that really added nothing to the movie as a whole. I got that they had no inkling of Judeo-Christian values—didn’t need the language to confirm it.
My Ratings: Moral rating: Offensive / Moviemaking quality: 4

Stephen Holden, The New York Times
…entertaining …Jon Favreau serves up a lightweight, high-calorie confection that may be an acquired taste. …

Joe Leydon, Variety
…The good news is that his slow simmer approach here never puts us off for too long as the camaraderie between him and his cast gives “Chef” its mild yet tasty spice. [3/5]