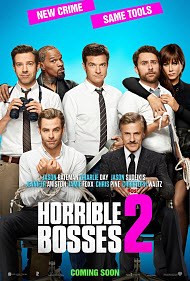 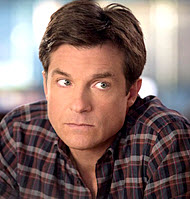 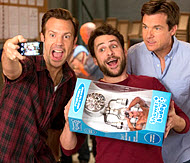 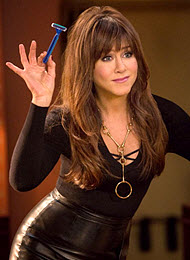 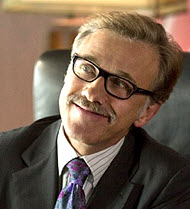 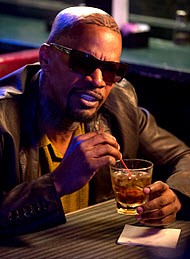 stinky sequel to a foul movie

Jason Bateman, Jason Sudeikis, and Charlie Day team back up for this sequel. After the first film, the guys are determined to be their own bosses and start their business with a hot new product and are fresh off a media tour. The guys get a call from a major manufacturer, played by the oh-so-talented Christoph Waltz and his son, played by Chris Pine. The inventors promise to purchase the lots of units once the guys get their business up and running. The deal goes sour, and the investors steal the guys’ idea, and, of course, the guys layout a plan to get back at the guy who wronged them.

Let’s start with the acting, mediocre, overall, but appropriate for this genre. Jason Bateman’s style of acting is appealing and kept my attention. All the other lead actors held their own and took advantage of the consistency of the storyline. I’m a huge fan of Christoph Waltz and was surprised to see him in this type of role. He is definitely entertaining, especially with Chris Pine as his son. The plot is above average for its genre, smart and well put together.

However, there is an abundance of objectionable content. There are numerous vulgar words and profanities, overt sexual content, nudity and violence. There is next to no redeeming content in this film. I truly believe that if they removed the objectionable content it would have been a pretty nice picture.

The running theme is unfairness and exacting revenge. As we know from Scripture, revenge is not ours, it’s the Lord’s. We, as humans, don’t like feeling wronged, but we, as Christians, know God is in control, and we know one day soon we will all have to face Him for our deeds and misdeeds.

As for a recommendation, it’s a no go, despite the okay plot and relatively good acting. The film is saturated with too much objectionable content that cannot be overlooked.

Negative
Negative—If you’re looking for a family movie, steer clear. Although I hadn’t watched “Horrible Bosses,” I decided to watch “Horrible Bosses 2” this weekend with my friend who had seen the first movie and liked it. To be fair, I found that the main plot was original and the unpredictable twists and turns in the movie were entertaining.

The film would have stood well alone without all the offensive language and sexual content that I felt was placed in the movie to add to the “entertainment value,” but instead took away from it. The film is full of expletives and offensive material: taking the Lord’s name in vain, F-bombs, sexual innuendos, references to private body parts, a scene where Justin Bateman gets knocked up by a sex-crazed Jennifer Aniston, just to name a few concerns for the family oriented movie-goer.
My Ratings: Moral rating: Extremely Offensive / Moviemaking quality: 5

Tracy, age 36 (USA)
Movie Critics
…A wretched excuse for a comedy, Horrible Bosses 2 falls into the classic sequel trap of attempting to dirty-up and double-down on every laugh. … [1/4]

Ann Hornaday, The Washington Post
…“Horrible Bosses 2” isn't as horrible as the original “Bosses,” but it’s not even a good R-rated comedy…

Betsy Sharkey, Los Angeles Times
…Everyone in the cast is just punching the clock through the preposterous and empty second half of the film. And that makes “Horrible Bosses 2” feel considerably longer than its bloated running time. [2/4]

David Hiltbrand, The Philadelphia Inquirer
…just lame …the worst comedy of the year… [1/5]