for strong crude and sexual content, nudity, drug use and pervasive language. 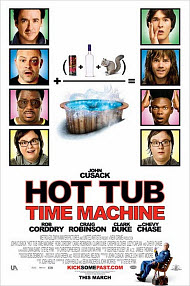 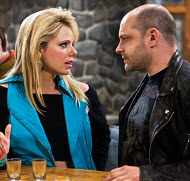 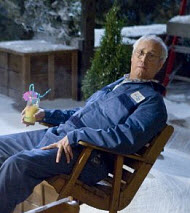 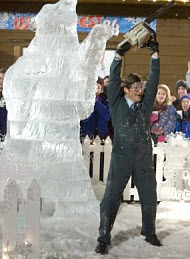 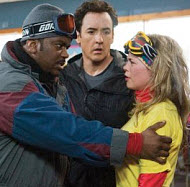 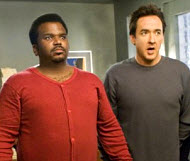 Remember the 1980’s: the fashions, the fads, the music? If so, you’d know that John Cusack was in about every famous teenage based movie (“Sixteen Candles,” “Better off Dead,” “Say Anything”), and if he wasn’t it probably was one of the “Back to the Future” films. Well, if you take the hackneyed science of those Michael J. Fox classics, throw in Cusack, and sprinkle in a healthy amount of “The Hangover,” you’ve got yourself the 1980’s throwback “Hot Tub Time Machine.” It’s a sometimes amusing, but always offensive, comedy romp about, you guessed it, a hot tub that transports you through time.

The story centers around three friends who have grown apart as they’ve gotten older. In fact, they hardly ever see each other. One’s an insurance agent (John Cusack), one a dog trainer and groomer (Craig Robinson), and the other a down on his luck bum (Rob Corddry). The three of them, along with one of their nephews, take a trip up to a ski lodge they used to frequent when they were younger. It’s not nearly the attraction it once was, but they notice in their room a (gasp!) hot tub. After partying in it, they wake up hung over in the year 1986. From there it plays out very similar to “Back to the Future,” as they realize anything they change in the past will change their future. Of course, this is nothing more than a crazy set up for the sex, drugs, and 80’s glam rock and roll to come.

As ridiculous as the plot is, the film has its moments. The key is that the filmmakers don’t take themselves too seriously, and they capitalize on the time period jokes. At one point, a main character says an outrageous line of dialogue, and then looks directly into the camera, as if to say, “hopefully you know by now how ridiculous this really is.”

There are a lot of 80’s jokes, and they’re made even better by some classic 80’s casting. Crispin Glover, an actor who most probably wouldn’t recognize nowadays, but was in the original “Back to the Future” film, is in “Hot Tub Time Machine,” as kind of a running joke. Chevy Chase, also, stops by as the hot tub repair man, and while his dialogue falls flat, he’s really there more as an homage to the 80’s “Vacation” films. Then, of course, there’s Cusack, and if you were a fan of his earlier stuff, you’ll get a kick out of him dealing with more 80’s shenanigans.

While all that’s good and well, it doesn’t nearly make up for the constant language and graphic sexual content that one has to endure in “Hot Tub Time Machine.” As I mentioned earlier, the film borrows heavily from “The Hangover” in its sexual tone and bathroom gags. I won’t go into details, but it’s safe to say that language is prevalent, and so are the sexual situations and nudity.

Unlike “The Hangover,” which was virtually void of redemption, there is a small (and I mean small) lesson about the importance of family and friendship. That small lesson is overwhelmed by a film that earns its ‘R’ rating within its first ten minutes. It’s a preposterous film that delivers some laughs, but does so amidst a sea of content issues. For most of you, there will probably be better ways to remember the 80’s than a trip in the “Hot Tub Time Machine.”

Negative
Negative—A few years ago I wrote in a review that in an age of fatwahs and culture wars, I was reluctant to the point of refusal to use the word “immoral” when describing a film. I tend to shy away from the word “offensive” for opposite but corollary reasons.

The ease and frequency with which the cultural morality police take offense means that word is stripped of any power it might have left, that it is largely filtered out and unheard, like a swear word bleeped out on basic cable—everyone knows what’s being said but still has to pretend that the word is explosive enough to actually mean something to someone.

The cultural deflation of moral umbrage also means that there feels as though there is no space between the latest drearily familiar jeremiad about how Hollywood has reached a new nadir and Sidney’s “Defense of Poesy.” Surely there ought to be a place on that spectrum to say that a movie, like say, Hot Tub Time Machine, is generically, mundanely, and depressingly offensive without having to claim that a new benchmark has been set in the annals of bad taste.

Here’s the pitch—“Back to the Future” meets “The Hangover.” (If I had money, I would bet the pitch was made or green lit after the latter’s opening weekend.) Three buddies (Cusack, Corddry, and Robinson as the sorts of characters whose names you don’t really remember) return to a ski lodge where they had some teenaged sexual hijinks that they’ve romanticized into the best years of their lives. The place has gone to seed, but when one of them spills some Russian energy drink into the circuitry of the hot tub, it sends them back in time, along with a nephew that will ostensibly not exist if the future is altered.

For reasons that aren’t fully explained, everyone sees the time travelers as teenagers, and their actual teenaged selves aren’t really there. (I know, I know, it’s movie about a hot tub time machine, so pointing out internal premise holes is pretty much a lost cause.) The decision to have the adult actors play themselves in the past (except when shown in a mirror), combined with the sexual coming of age nature of the story actually gives a sort of creepy/gross overtone to the whole enterprise, as the buddies leer openly at girls twenty-five years their juniors.

The conceit that they must not change the past is nothing the film is committed to following through on—it’s a premise pretty much thrown in as an excuse to get the one married member of the posse into a hot tub with a topless teen, forced (against his will) to try to “let” her have sex with him lest they somehow alter the temporal physics to make Hitler the president of the United States. Corddry’s character wins some money gambling on sports events, an aside that is a long, unfunny subplot designed to get us to a pretty unfunny bet where Corddry wagers a… [sexual act] from a lodger’s wife against the promise to give… [a sexual act] to his male buddy that the Broncos’ famous playoff drive will end in a John Elway touchdown pass. Needless to say, the past does get altered (hey, at least the film will play well in Cleveland), and as if the gratuitous homophobia played for laughs isn’t offensive enough, Cordrry has to give a motor mouth monologue (while being held at gunpoint by gambler and egged on by crowd) about just how very, very, big and very, very, black, [a part of] Robinson’s [anatomy] …is.

And yet, that wasn’t the most jaw dropping miscue of the whole film. That honor belongs to a scene in which Robinson, distraught by his future wife’s infidelity, calls her nine year old, 1986 self and screams at her while describing in graphic, sexual detail what she has done that he can’t forgive her for. I understand the point of “R” rated comedies in the South Park era is to be intentionally in poor taste (as though the intent were the justification), but obscene calls to minors? Really? That’s all you got? John Cusack (who actually took a producer credit), shame on you.

I could give a longer, more erudite dissertation grounded in genre criticism to state what’s wrong with the film… the fantasy at play is supposed to be second chances and correcting past mistakes rather than reliving them and exploiting the premise to change your circumstances without having to address the reasons for them…but really, what does it matter? The film doesn’t fancy itself the descendant of Peggy Sue Got Married but, rather, Porky’s or American Pie.

Then again, honesty compels me to report that the person who had the response card at the test screening before me wrote that the film had “lots of funny one liners” so my guess is that United Artists will be just fine despite my puritanical finger wagging. I did laugh out twice during the screening. First time: Cusack’s 1986 girlfriend listening to a Poison song: “This is like the greatest song ever!”; Cusack: “Well, maybe not ever.” Second time: Corddry trying to hurt crowd by using his knowledge of future events: “John Lennon gets shot! [To self, under breath] Or, wait, has that happened already?”

The latter elicited a chuckle because of the way that things that seem like cultural touchstones tend to blur together as they recede into the past. Of course, when you think about it, jokes about celebrities getting murdered are more tasteless than funny, so even when Hot Tub Time Machine works, it doesn’t.
Which pretty much sums it up in a nutshell.