for strong language including some sexual references. 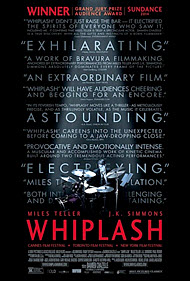 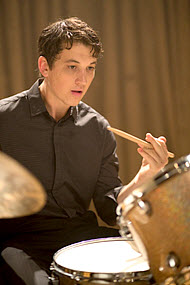 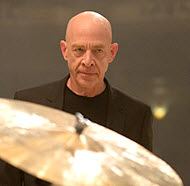 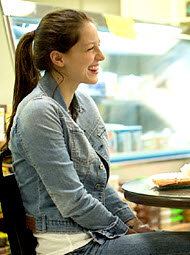 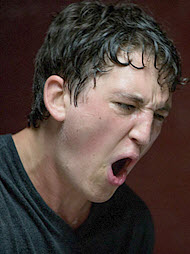 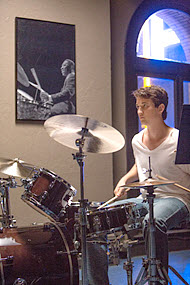 In “Whiplash,” Terence Fletcher, played with pounding, no-holds-barred intensity by J.K. Simmons, is a music instructor at Shaffer Conservatory, a fictional music academy for aspiring jazz musicians. Andrew Neiman (a first-rate Miles Teller), one of Fletcher’s students, wants to be a professional drummer. He sets his sights not on being a member of a band (a comment is made about failed drummers joining rock bands) or a studio musician. Andrew believes he has what it takes to be a great drummer, perhaps the next Buddy Rich.

Fletcher knows talent. He sees plenty of it in the elite New York school where he teaches. He senses that Andrew may have more than talent. He may possess that elusive and indefinable “thing” that propels the gifted beyond accomplishment and into greatness.

To tap that “thing,” Fletcher pushes Andrew. He does not goad his student the way an avuncular coach would. There are no pep talks, no pats on the back, no second chances. You mess up, and you’re done. In his more benign moments, Fletcher taunts, berates and hollers. He is threatening and profane; his choice of words would make David Mamet or Jay Z blush. And if you think he’s all bark and no bite, you would be wrong. When the cursing falls short, Fletcher cranks things up.

“Are you rushing or dragging?”, he shouts as he tries to force Andrew to keep tempo with the other musicians. Fletcher responds to each of Andrew’s answers with a hard slap across the face. A growing red blotch and a falling tear on the student’s cheek do not hold Fletcher back. He goes further. At one point, he hurls a chair at Andrew’s head. He barely misses. “Charlie Parker would never have become ‘The Bird’ if Jo Jones hadn’t thrown a cymbal at his head,” Fletcher says, as a way of justifying his over the top, and borderline criminal, actions. The story about Jones and Parker is legendary, and most likely apocryphal, but Andrew believes its message. He will dodge flying objects and take slaps to the face, if such a baptism by fire will bring him Parker-level fame.

“Whiplash” (the name of a tune that is hard for musicians, especially drummers, to master) was written and directed by 29-year-old Damien Chazelle. This is only his second film, but he directs with keen insight into personality and a shrewd sense of humor. The film is about an ingénue wanting to be a headliner (almost all movies about music and dance and sports, especially football and boxing, have that same story line) so the usual clichés get thrown in—the tentative and doting father (Paul Reiser) who gave up his own dream of being a writer and now teaches high school, the romance with the local girl (Melissa Benoit) who is understanding but also an anchor, and the do-or-die competition that promises to be the film’s climax.

In “Whiplash,” you actually get two competitions. In between them, the film loses a few beats, but Chazelle restores the rhythm and ends the movie with a bang. Drums roll, and so do heads. You watch the fine lines between respect and contempt, intimacy and deceit, and tenderness and bared-teeth violence dissolve, but, ultimately, it is the music that is the great leveling, and healing hand. All human shortcomings are forgotten in the face of a hymn well sung or a piece well played.

In Chapter 25 of his gospel, Matthew tells the parable of the talents. One man dug a hole and buried his gifts, while others went out, used those talents and even multiplied them. It is easy to hide a talent; it’s even easier to give up on it.

Reinforcements and rewards do not come our way every day. Our masters do not often say: “Well done, good and faithful servant.” Fletcher is not someone whom we might call a good master. He tells his student that the two most harmful words in the English language are “good job.” I cannot condone Fletcher’s behavior. He’s contemptible, most of the time. Nonetheless, his faith and his hope redeem him. He never stops believing that there are great things and great people out there, and he longs to find them. He will not tolerate someone who “buries a talent.” He demands that it be used and multiplied. His wretched behavior may be a threat to civilization, but the reasons he uses it may be civilization’s hope.

Negative
Negative—I just saw “Whiplash,” an extremely odd movie. It takes the topic of dedication to musical excellence to a psychotic extreme. The story rotates around the interaction between a sadistic, abusive, deranged music teacher and his naive, ambitious young student, who allows himself to be subjected to the abuse.

I went to see the movie because I have always liked the performances of J.K. Simmons, who has been earning awards for his performance as the cruel teacher. His performance is so over-the-top and intense that I can see why its virtuosity is being awarded. But the movie is painful to watch. Fletcher’s language is the most vulgar, foul and abusive profanity I have ever heard. The young protege, Andrew, played very plausibly by Miles Teller, is harmed by Fletcher’s treatment of him.

I stayed and watched to see what happened. The only saving grace in the movie is the love that Andrew’s father has for him. Paul Reiser exudes fatherly compassion for his misguided son.

This movie is so emotionally draining and verbally offensive that I don’t recommend it to anyone. I am a die-hard movie critic, so I was curious. But this story is too painful and the worldview too perverse to be worth the price of the ticket.
My Ratings: Moral rating: Extremely Offensive / Moviemaking quality: 4

Halyna Barannik, age 68 (USA)
Negative—The world worships excellence, and we are on mediocrity. “Whiplash” is not a great movie, but it knows what greatness means. We are, most of us, dwelling in the middle and admire and envy those who reach the higher realms of achievement. These are not my words, but the words of the NY Times critic of A.O. Scott, who talks about this film. The film is technically good and has good actors’ performances. However, to verbally and mentally abuse somebody for something, whatever that is, is illegal, because it is abuse and does not achieve anything… This is bullying at its best, and I despise the movie.

We have enough young people committing suicide due to all sort of bullying, not even about achievement, but simply fitting in, and we make movies where talented people killed themselves because a teacher is psychotic; it is horrifying and not Christian.

How many soldiers kill themselves when they come back from the war because of the horrors they witnessed? This film is a horror morally, and we should help each other, discuss issues, resolve them, rather than attacking each other for achievement.

What is achievement? What is the definition of it? Money? A big house? This is no achievement… How many people have you help along the way? And how you share what you have, success or other, that is achievement, and this is only reached through kindness.

This film is evil in morality, and I feel for all the young people today that are under so much pressure to achieve and commit suicide instead. The movie portrays that very well.
My Ratings: Moral rating: Extremely Offensive / Moviemaking quality: 4

Marie, age 52 (United Kingdom)
Negative—What to say, what to say. I am going to do this review the best I can. Whiplash tells the story of a young man named Andrew Neiman, played by Miles Teller, who doesn’t realize what’s he’s in for when he meets Terrence Fletcher, played by J. K. Simmons. Andrew is trying to live out his dream as a jazz drummer, but Terrence gets in his way when he becomes his all-out rude jazz drumming instructor, like you wouldn’t believe. There is so much cursing in the movie it felt like I could run away. It’s embarrassing how there is cursing in movies in the first place. The rudeness level of Terrence is unbelievable, and is not instructor and Christian worthy. Andrew is the same way in this movie in parts of it, although he is not rude all the time like Terrence. In certain scenes however, he might seem as rude as Terrence.

I am not going against the film as a music film, since music has always leaded me in life and is inspiring me now, but I am going against the film due to its immoral content. The movie is inspiring, however, due to it showing that goodness is unstoppable. Andrew fights hard for good, and in the end scene he leaves the stage during a performance concert, in which he is playing, due to him giving up. But the case in this scene is the same as mine in the past, don’t give up. Instead go back. Something always good happens. As I said before good is unstoppable. So is God, who gives us good all the time.

When Andrew goes back to the drums, good wins. And we are unstoppable in God and can always do good in him. This is the positive message of the movie, the movie shows that we should never give up in God.

I rated the movie very offensive due to its immoral content. Immorality needs to stop in movies. Andrew shows his instructor that good wins. This movie blew me away, due to it being so amazing and dramatic. God Bless!! :);):);) And one more thing, Terrence finds out that Andrew told on him at a meeting and Terrence unfortunately gets mad at Andrew instead of acting forgiving towards him. Andrew might have felt the same way towards Terrence in this scene, but it would be better if they let it go, forgave and forgot. Andrew also gets mean towards Terrence, but it would have been better off for Andrew to forgive and be nice to him, that’s it. Films always need to have forgiveness in them!!
My Ratings: Moral rating: Very Offensive / Moviemaking quality: 4