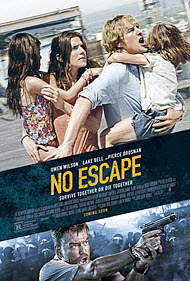 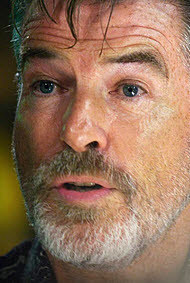 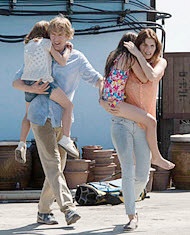 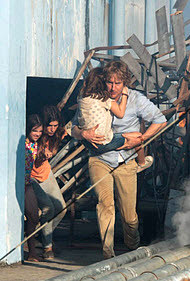 father’s duty to protect his family

“Survive together or die together”

Here’s what the distributor says about their film: “An intense international thriller, NO ESCAPE centers on an American businessman (Owen Wilson) as he and his family settle into their new home in Southeast Asia. Suddenly finding themselves in the middle of a violent political uprising—a coup; they must frantically look for a safe escape as rebels mercilessly attack the city and execute foreigners. Directed by John Erick Dowdle and written together with his brother Drew, NO ESCAPE stars Owen Wilson, Pierce Brosnan and Lake Bell.”

Positive
Positive—After a few horror movies, the director widens his portfolio with this action thriller starring a bigger cast. This time, Owen Wilson has to escape with his family from an angry mob in a “Thai” country. The acting and action are good and you do get immersed very quickly in the movie. With 2 young children to take care of, the tension is very palpable, as the country is falling apart and people are being killed all around them. The only relief is the hope that Pierce “James Bond” Brosnan will reappear and save the day at some point.

Despite feeling quite realistic, there are a few American clichés at moments that drag down the movie. What would you do to survive with a family in the middle of a war? This movie is a great reminder that this is happening in some countries with people dying in the streets everyday. But ultimately, we know that God is a good god and that in the end, the light will overcome the darkness.
My Ratings: Moral rating: Offensive / Moviemaking quality: 3½

Nicolas, age 28 (United Kingdom)
Movie Critics
…“No Escape” delivers a surprising amount of heart… does succeed where many disaster flicks fail, in that it shows us a family we can learn to care about, and it gives us a few moments poignant enough to make us stop and think. …

Debbie Holloway, Crosswalk
…Wilson makes for a counterintuitive but smart choice… What keeps the movie nervy and kinetic is that, for a good hour, it never seems that Jack and family are anything but average people who somehow manage to survive one hellacious trial after another…

Kyle Smith, New York Post
…one of the most intense, jeopardy-filled movies ever made, with a strong emphasis on the importance of family, but it has some very strong violence, foul language and politically correct elements in one scene. …

Ted Baehr, Movieguide
…This pic presents a world chock-full of bloody rage, inhuman mob violence and foul profanity. And that’s bad enough to sit through all on its own. But it gets its real terror from the fact that we can so closely identify with parents Jack and Annie. …

Bob Hoose, Plugged In
…this is the most intense film I’ve seen in many years… serious drama, with a slamming indictment concerning American capitalism…