for mild action/peril and some rude humor. 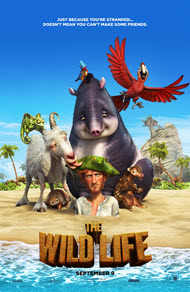 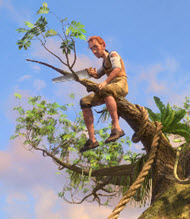 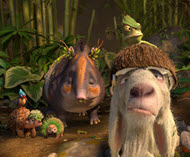 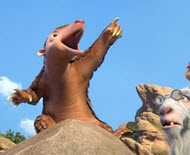 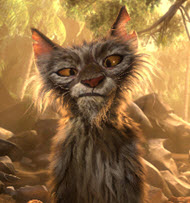 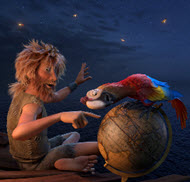 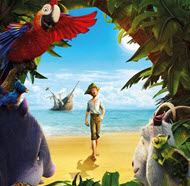 prayer in the Bible

Editor’s Note: This review was written by a new volunteer. Please send us your evaluation of his work.

“The Wild Life” is a re-telling of the story of Robinson Crusoe—the marooned man who tries to survive on an uninhabited island. Robinson Crusoe, in this story, begins as a wannabe map-maker who isn’t much of a pirate, as he easily gets sea-sick. He is portrayed as the prototypical “nerd” who doesn’t have athletic skill and is often clumsy to no end. His ship crashes, he is stranded on an island along side his loyal dog. The movie is about his interactions with the island—mainly with the animals, that are friends with Tuesday, a talking Macaw, and his struggle to survive on the island against the elements and a group of wild cats from the shipwreck.

The main question of the movie is whether or not Robinson Crusoe will get off the island or not? To do so, he will need a lot of help along the way.

ANIMATION: The ocean and island life looks magnificent. It’s bright, detailed, and clear. It is on par with the top animation studios (Illumination and Pixar included).

SEXUAL CONTENT: Talk of a female animal character’s curves; nothing else of mention to worry about here

HOW THE GOOD GUYS ARE PORTRAYED: Clumsy, but loyal.

HOW THE BAD GUYS ARE PORTRAYED: Prone to violence, scheming, and lying throughout the movie.

LANGUAGE: • Bloody (a favorite of British culture) • Skullduggery • Landlubber • Mention of cannibals without explanation of what they are • Talk of murderers and a cursed island • Cats telling each other to “Shut it” and to “Shut up.” • Various Name-calling (thief, old-goat, sea-monster, hairy beast, cannibal, rotten, knuckleheads, etc.) • Talk about one of the cats being pregnant as the reason for her being so mean and in a bad mood • Typical rude humor and action—including butt scratching • Pirate talk of “hanging from the gallows” • Talk about blowing a character to smithereens

VIOLENCE: • Gunfire by pirates • Dogs chasing cats • Cats trying to eat chickens • Crusoe tossing cats into the pirate ship • Stormy weather that throws animals and humans around the boat • Shipwreck • Cats claw at our protagonist • One cat chokes another cat briefly • Lots of plotting to “pick off” the other animals and Robinson Crusoe “one-by-one-by-one” • Multiple threats to “take care of” and make other characters “dead.” • A door smashes a beloved character while a fire rages—some pretty heavy and scary imagery—and said character actually dies in the fire • Various scenes of animals fighting throughout • Animals falling off cliffs • Use of bombs • Animal tries to use a gun • Animals falling long depths into the ocean • Houses burning and characters narrowly being rescued • Knife and sword throwing by the pirates at Robinson Crusoe • Cannon fire towards Robinson Crusoe

WORLDVIEW: • LOTS of talk about good luck if you perform certain actions • Various talk about a cursed island (superstitions) Allusions to being a dreamer—the macaw/parrot “dreams” of a “bigger world out there.” • Crusoe sings a short jingle about a mermaid • Call for a moment of silence before eating and then clasping his hands together and closing his eyes without speaking, but no mention of prayer and no explanation to the animals about what he is doing.

IS IT BAD?—There was too much violence that made my wife and I cringe. We have a 4-year old daughter and wouldn’t want her seeing so much violence and talk of serious issues like cannibalism, hanging from the gallows, curses, superstitions, and good and bad “luck.”

IS IT GOOD?—We appreciated the themes of friendship and loyalty among the animals, following your dreams for change, learning to trust others, and trying new things.

CAN I RECOMMEND IT?—I can’t. Amidst all the violence mentioned and the language, the movie wasn’t very good. It was a weak script and a weak story, overall. It had my wife and I yawning, without any hint of being captivated by the conflict or solution. Couple that with a dependence on a worldview where “luck” abounds, it’s not something we, as Christians, would want our daughter to watch. Is it the WORST choice you could make to show this movie to your kids? No. However, it’s certainly not our choice for the first, second, third, or one-hundredth movie to show our child.

Our Biblical reasoning for our thoughts on the movie:

“Above all else, guard your heart,
for everything you do flows from it.
Keep your mouth free of perversity;
keep corrupt talk far from your lips.
Let your eyes look straight ahead;
fix your gaze directly before you.
Give careful thought to the paths for your feet
and be steadfast in all your ways.
Do not turn to the right or the left;
keep your foot from evil.” —Proverbs 4:23-27

We must take the responsibility of guarding the hearts of our children from superstitions (we are to have nothing to do with them according to 1 Timothy 4) and things that will bring fear into their lives (including the unnecessary death of one of the more likable characters, as well as an over emphasis on violence as the solution to all problems). In the end, there really isn’t a solution that coincides with a Biblical worldview, and, because of that, we give the movie an overall negative rating absent of our recommendation.

Movie Critics
Long after our screening of the animated feature “The Wild Life,” my almost-10-year-old companion was still chatting about the film’s amusing animal characters. And judging from the sounds emitted during that screening, I suspect that younger children in the audience liked it even more. …

Helen T. Verongos, The New York Times
…a flighty bit of fun …a kids’ pic worthy of a shared bucket of popcorn and a couple o' sodas. …there aren't any cannibals or exotic words you'd hate to have repeated, either. [4½/5]

Bob Hoose, Plugged In
…has its moments of charm, hilarity, and slapstick that worked really well at the 2D screening I attended, a screening packed with kids… [2½]

Ted Baehr, Movieguide
…an impressively made, if highly juvenile, version of a literary classic…

Andrew Pulver, The Guardian (UK)
…a castaway tale that’s all washed up… By removing the element of danger from its plot, this Belgian animation, featuring a gallery of chatty animals, has nowhere to go… [2/5]