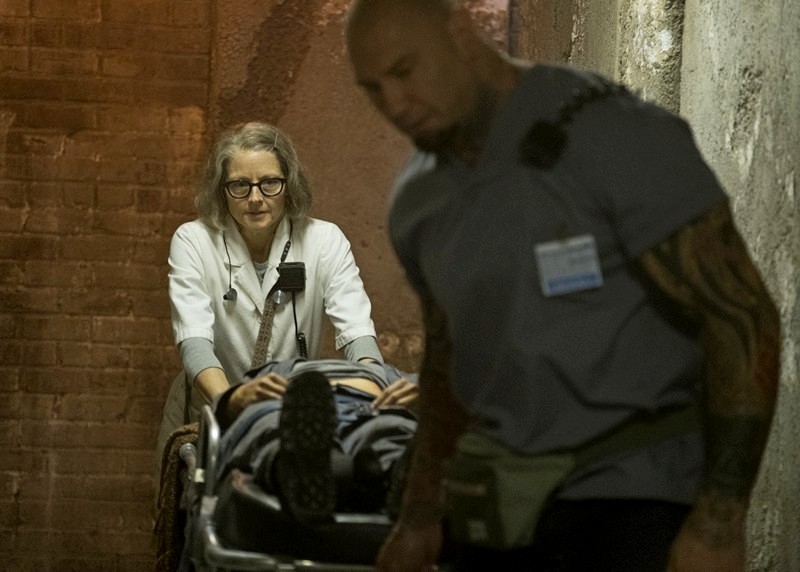 for violence and language throughout, some sexual references, and brief drug use. 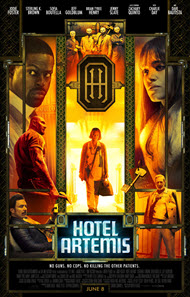 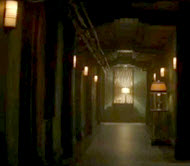 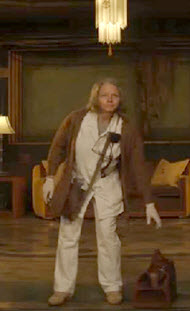 The name “ARTEMIS” refers to a false god of ancient idolatrous pagans—a daughter of Zeus and sister of Apollo. Artemis was her Greek name; Romans called her Diana. She was worshipped as the equivalent to Mother Nature at Ephesus. 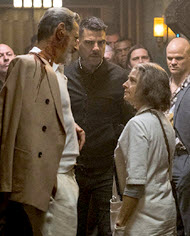 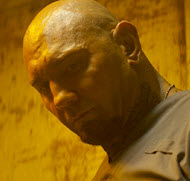 The city? Los Angeles. The year 2028. The city is in chaos as water supplies have grown thin. This, in turn, has led to a dramatic increase in crime (more than what was already present in the city before the shortage).

But amongst the chaos stands a building built on stability, the Hotel Artemis, run by a woman named Nurse (Jodie Foster) and her orderly Everest (Dave Bautista). Their patients? The criminals of Los Angeles. Not just any criminals though! Oh no! You have to have a membership, and you must follow her rules, such as: no weapons, no beating up or killing other patients (i.e. criminals), no cops or non-criminals allowed on the premise, etc. Surprisingly, even amongst the criminals that reside there, they are more than happy to abide by these rules, until one night, when some unexpected “guests” visit the Hotel Artemis. Rules are meant to be broken I suppose…

To say anymore would be to give away too much of the story. However, if you’re someone who likes to get to the bottom-line right at the beginning of a review, here it is: “Hotel Artemis” has absolutely nothing redeeming or edifying to provide viewers and should be avoided. “Hotel Artemis” essentially emphasizes, personifies and glorifies violence and darkness. Now granted, Jodie Foster gives a stellar performance as Nurse, providing a solid backstory and overall character development, and the plot is relatively easy to follow (with some questions and character motives that, honestly, don’t make much such sense [e.g., The role of Nice in the movie. What is she after?]). But should you wish to see this film, be forewarned you will subject yourself to a plethora of violence (some slightly graphic) and excessive amounts of language that will even make the “Oh-I-can-handle-the-violence” or the “I-can-handle-the-language” moviegoer go, “Oh…wow…”

Violence: The movie’s violence is excessive and some of it extreme (please note, not all of it is listed here). Violence includes, but is not limited to, criminals being shot at multiple times and in different ways (e.g., in the back). The criminal Nice knocks a man unconscious. There are two scenes where we witness a dead teen floating in water. A character has their throat slowly slit, graphically, and we witness blood gushing out of his neck. Another character is killed by having his head smashed by a 3D printer. Some characters are seen being violently beaten before being killed. Another character is given an elephant tranquilizer which kills the character (we see his distorted face and foam coming from his mouth as a result of the reaction).

Sexual Dialog/Sex/Nudity: The sexual dialog in the movie is very heavy, including mention of some particularly vile male mastrubation. A woman wears a very form-fitting and somewhat revealing dress and reveals her upper leg and garter. She also has a camera in her eye that she is going to use to record an assassination as she is having sex with her prey. Nurse mentions that she is a lesbian and makes reference to her history a few times as well as her, uh, anatomy. There are some references to a woman’s rear-end, and a man tries to flirt with her. There is also kissing.

Other: Criminals are seen smoking drugs at various points in the film. One character is seen snorting cocaine. Nurse is seen drugging a character to extract the truth from him. There is a streak of blood on the floor.

As I said, there are no lessons, no morals, absolutely NOTHING redeeming, pleasurable or satisfying in viewing “Hotel Artemis.” This is not an acceptable film for Christians to view and, please do NOT take children to see this film. I beg you, just like with the film “Hereditary,” there are some things in this world that do not have to be seen. The content in “Hotel Artemis” is one of them. Avoid this movie at all costs!

Secular Movie Critics
…director…Pearce manages something difficult. He creates a tone that acknowledges absurdity, but also consequences. He finds an edge that’s extreme, that’s weird, that’s satirical and that goes right to the edge of farce, and yet the movie is at all points as involving as an intense drama. …
Mick LaSalle, San Francisco Chronicle
…a film of considerable originality. And that makes it a rarity at the multiplex. …
Calvin Wilson, St. Louis Post-Dispatch
…manages to make the most intriguingly bonkers premise a boring and flat exercise. …
Barry Hertz, The Globe and Mail (Toronto)
…sleazy, insanely violent, and reasonably entertaining B-movie trash…
Peter Sobczynski, RogerEbert.com
…The flavorful cast inhabit vividly drawn characters, and, perhaps most of all, the film exudes wall-to-wall, high-grunge atmosphere. …and yet the effect is efficiently wild rather than wildly involving, entertaining but not indelible. …
Leslie Felperin, Variety
…Like many movies set in colourfully bleak futures, Hotel Artemis can’t sustain the novelty of its initial world-building. …
Tim Grierson, Screen International
…Moronic drivel that truly qualifies as the worst movie of the year, it sinks amateurish moviemaking aimed at audiences with no taste to an alarming new low. …
Rex Reed, The New York Observer
…falls victim to much of what ails any ensemble picture—rushed plotting, forced coincidence, indulgence—but still manages to make a big impression. …
Randall Colburn, Consequence of Sound
…a confused, jumbled film that never quite gets its story straight. …
Bill Goodykoontz, The Arizona Republic
…an uneven feature film directorial debut. He flaps around for a consistent tone, stunts some potential story lines and kicks out a bunch of clichés. Then, clearly unable to find a rational way to end his film, he adds two massive doses of nonsensical ultra-violence. …
Mark Kennedy, The Associated Press