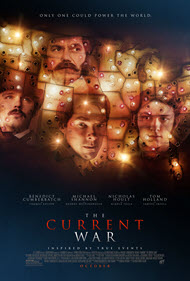 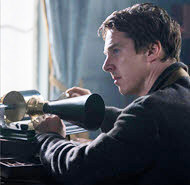 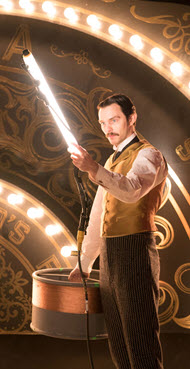 The dangers of human ego and pride

Lying and other sins

People who become such driven workaholics that they neglect their families 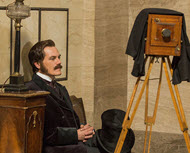 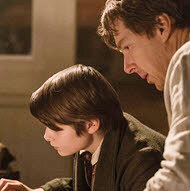 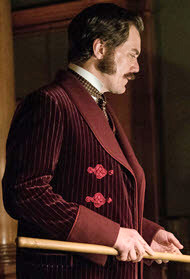 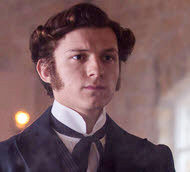 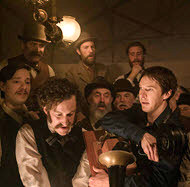 “Only one could power the world.” 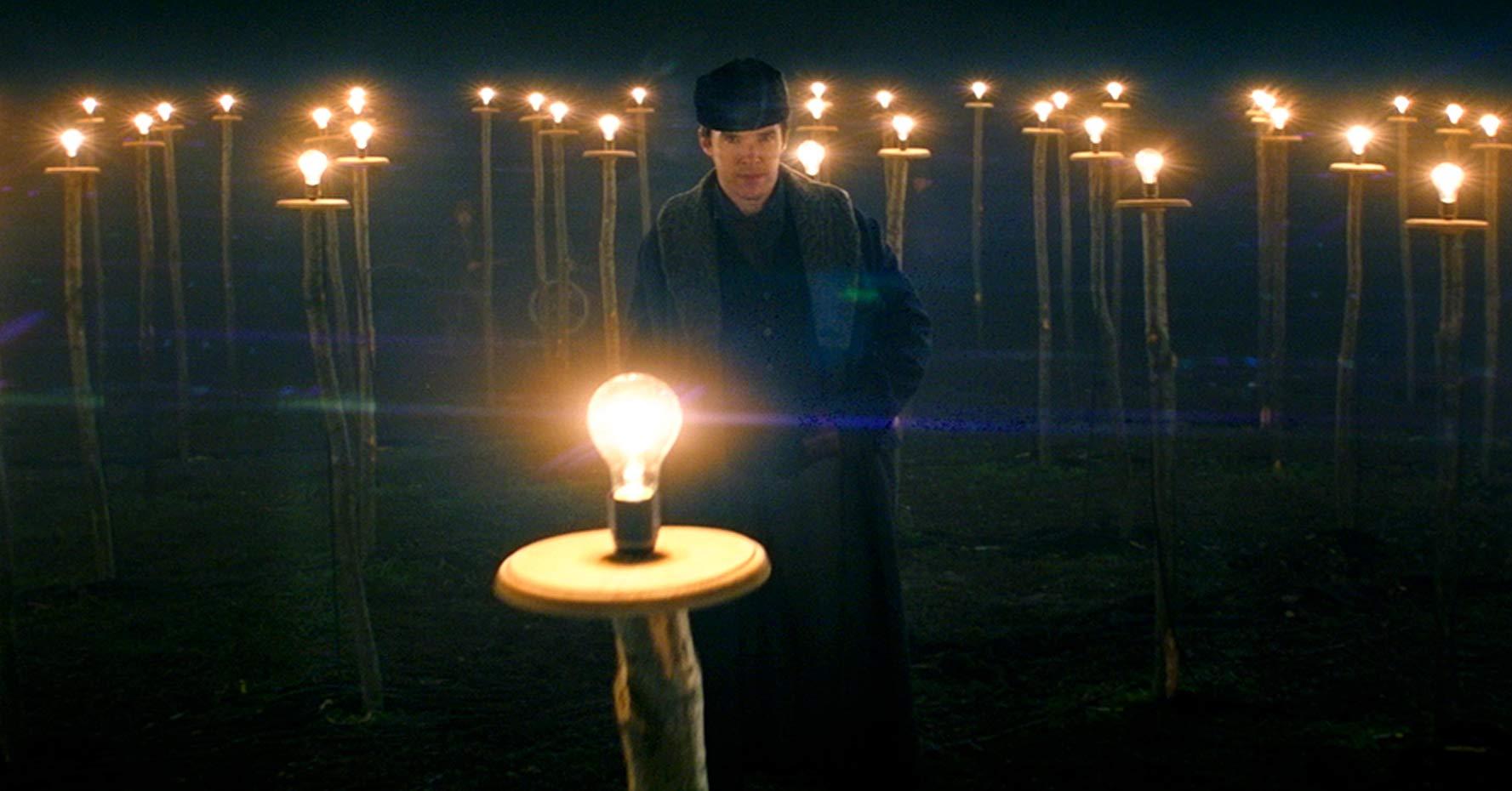 After a two year delay, due to the toppling of big-time film producer Harvey Weinstein, one of the financial backers of this film, by the “Me Too” movement, Alfonso Gomez-Rejon’s “The Current War” has finally made it to theaters. With a great cast that includes Benedict Cumberbatch, who’s acting talents I’ve enjoyed ever since I first saw him in “Amazing Grace,” this movie, on the surface level looked very appealing. Did I mention that it is also a historic drama based on true events? What more could you ask for, right?

The film opens in 1880, with Thomas Edison giving an impressive demonstration of his newly patented light bulb to a group of wealthy investors. Utilizing on-screen titles, we are then introduced to all of the main players in this drama in rapid succession. Thus the viewer starts the fascinating behind-the-scenes journey through the tumultuous first years after the invention of the electric light bulb.

Edison is an ambitious man with a loving family that he is neglecting. He wants to succeed in all that he does, but also wants to be the FIRST to succeed. This competitive spirit proves to be a problem for him.

George Westinghouse, shrewd and smart, sees opportunity to profit from Edison’s light bulb. He isn’t interested in competing, but wants to partner with the Wizard of Menlo Park. However, events transpire that make this impossible, and so the two talented inventors begin warring for the national domination of their different currents, Edison with DC and Westinghouse with AC. No war is without casualties, and this one is not an exception.

In the midst of the clash, Nikola Tesla arrives in the United States from Europe. Though not the focus of the film, his early years as an inventor and futurist are displayed. The genius from Croatia seeks to make a name for himself, but lacks the financial backing that allows Edison and Westinghouse to thrive. Neither he nor his amazing brain will be stopped though. These three brilliant men all have the desire to succeed, but who will triumph? Who will be remembered?

Violence: A horse is electrocuted offscreen. A blood spattered man is seen briefly just before he confesses to murdering his wife. In a tense flashback that is drawn out and interspersed throughout the film, a Union soldier shoots a Confederate at close range before the scene immediately cuts without showing any bloody aftermath or gore. A character dies in an electrical accident. A man is executed via the electric chair. The filmmaker tactfully builds to this moment, but avoids showing it. However, a character briefly reads a newspaper account of the event that includes some disturbing details.

The strongest scene of violence shows a condemned prisoner’s hanging. He doesn’t die immediately, so the executioners yank on his legs a couple of times until the viewer hears his neck break. It is a fairly quick shot but lingers long enough to likely frighten young audience members.

Sex: Kiss between a married couple. A clothed, married couple are seen in bed for a few seconds. A very mild and short conversation between two women about one’s wedding night. A man recommends going to see “Little Egypt” to another man, referring to the sensual exotic dancer that performed at the Chicago World’s Fair. The talk is brief and gives no objectionable details.

Drugs/Alcohol: A doctor prescribes Laudanum for a patient, but the actual drug isn’t seen. There are a few scenes in which men smoke cigars. There are passing moments in which characters imbibe alcohol, but no drunkenness is seen.

There is constant conversation revolving around success and monetary gain. While these things aren’t bad in themselves, some characters obviously have these as the main focus of their life, and it reminded me of verses in the Bible about those that foolishly live for wealth.

“He who loves money will not be satisfied with money, nor he who loves wealth with his income; this also is vanity.” —Ecclesiastes 5:10 ESV

“Do not store up for yourselves treasures on earth, where moth and rust destroy, and where thieves break in and steal. But store up for yourselves treasures in heaven, where neither moth nor rust destroys, and where thieves do not break in or steal; for where your treasure is, there your heart will be also.” —Matthew 6:19-21 NASB

The drive to succeed and defeat rivals pushes Edison to the point of breaking the 9th Commandment (Exodus 20:16). He then sets out to prove his lie to be true, through a series of disturbing public exhibitions that today would be deemed inhumane, showing how our sins, if unchecked and not repented of, grow worse and greater in magnitude.

A doctor speaks of “…letting nature take its course” in regard to an incurable medical malady, missing the opportunity to explain that sickness and diseases are part of the curse of sin, and are unnatural invaders of a once perfect world created by God (Genesis 1-3).

The truth of Numbers 32:23 is portrayed (“…your sin will find you out”), but to avoid spoiling some of the plot, I’ll not give details here.

Westinghouse seems to generally exemplify the words of Proverbs 22:1 in his life, speaking on numerous occasions about not seeking fame, but rather wishing to make an actual difference in people’s lives by providing services to them. He is desirous of leaving a positive legacy and doing business honestly.

“A good name is to be more desired than great wealth,
Favor is better than silver and gold.” —Proverbs 22:1 NASB

A man confesses sin to his wife, which is a Biblical command.

“Therefore, confess your sins to one another, and pray for one another so that you may be healed…” —James 5:16 NASB

Unlike the 1940 Spencer Tracy biopic of Thomas Alva Edison, this picture doesn’t gloss over the life of the famous inventor, but portrays the grittier (and more accurate) details of his career. Cumberbatch plays the role well, managing to suppress his English accent and bringing out the humanness of Edison nicely. In fact, none of the actor’s performances really fall flat.

The filmmaking is superb, as is the costuming, which is important, due to so many close-up shots. Of course, none of this is surprising, given that people like Martin Scorsese were involved in the production of this motion picture. This all makes for captivating entertainment.

Do I recommend the movie? Yes, go see it! The coarse dialog isn’t overpowering, the violence is handled delicately, nudity is nonexistent, and the slight sexual material is very mild. You’ll be entertained much, your emotions will be piqued some, and maybe you will even learn a little new historical information as well!

Positive
Positive—First, the visual style of the film is “gorgeous” to watch. With its subject matter being electric light, the whole movie is an interplay of scenes with shadows and light. It has a “lushness” like a Victorian room—which was the time-period when the events shown in the film took place.

Secondly, it’s one of the more recent films which satisfy exercising one’s intellect—meaning that the film is “slow,” and requires more of an intellectual response to enjoy it.

Thirdly, film critics point out how the director “re-made” the film by cutting out scenes and adding scenes which were not in the original film release. Thus the film has an interesting history of production, unlike many other films. I can agree with the film critics that the film has a “re-worked” style, but for me that adds another angle in the appreciation of the film.

Fourth, towards the end of the film, the character of “Edison” is in conversation with another character, but in that scene Edison is basically giving a stunning monologue which sums up the emotional meaning of the film.

Fifth, the characters displayed are noble but flawed, which draws us all in.

And finally, because the film is in part the history of how electricity reshaped the world, it bears directly on our own lives to this day. When you walk out of the film, you have a greater appreciation of our own urban environment. The film concludes with a nod to how Edison helped develop motion picture technology—like a “handshake” from Edison’s time to ours.
My Ratings: Moral rating: Better than Average / Moviemaking quality: 4