Dora and the Lost City of Gold

for action and some impolite humor. 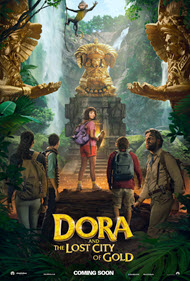 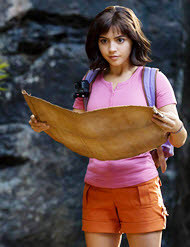 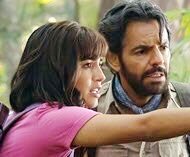 Being a kind person—a Fruit of the Spirit (Galatians 5:22) 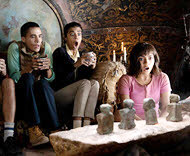 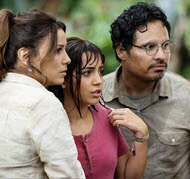 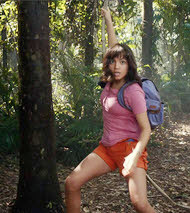 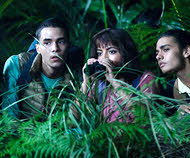 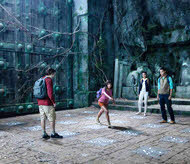 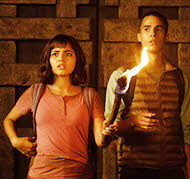 “Explorer is her middle name”

As a father of five children, I have been well versed in Nickelodeon’s popular childrens’ show “Dora the Explorer” over the last decade. So, “Dora and the Lost City of Gold” seemed like a logical movie adaptation for me to watch in preparation to show my children… a couple of whom are very sensitive viewers.

As a child, Dora lived in the jungles of South America with her explorer parents. She played with her cousin Diego and her pet monkey Boots. Each day was a new adventure, and she even had a quirky habit of including her fictitious home audience. She was a bit odd, but her life was perfect.

Fast forward ten years—Dora (Isabela Moner) is now a teenager, Diego (Jeff Wahlberg) has moved to the United States, and her parents are preparing for their biggest adventure yet… this time, without Dora. Change is happening. Dora must move to America to live with her separated cousin and attend a real high school. Her persistent positivity, colorful clothes, and passion for learning isolates her from the other apathetic students. Even Diego is embarrassed by his overzealous cousin. Dora feels alone. She misses her home and her parents.

When things feel like they can’t get any worse, Dora, Diego, and two other students are suddenly kidnapped from a field trip. The kidnappers are searching for Dora’s parents and the treasure they may have unearthed. The four teenagers find themselves captive in South America with no hope. Unexpectedly, they are rescued by an old friend of Dora’s parents, Alejandro (Eugenio Derbez). He is a bit incompetent, but he has freed them nonetheless. Together, they must find Dora’s parents before the kidnappers do… through the jungles where Dora just so happens to feel the most comfortable.

“Dora and the Lost City of Gold” doesn’t seem to know who its audience is. Is it aiming for the preschoolers that currently watch the animated series and respond to the TV when Dora asks questions? Or, is it reconnecting the teens and preteens that once enjoyed the show and now embrace the nostalgia? The film attempts to straddle the fence of both age groups, and by doing so, they have made a movie that is appealing to neither. At one moment, there is slapstick action with talking animals… in the next, characters are threatened by a frightening witch doctor. The humor is infantile, but the action is truly perilous. Depending on the age, kids will be bored to tears or scared to death.

Isabela Moner (“Instant Family,” “Sicario: Day of Soldado”) is delightful but a bit overwhelming as Dora. Her smile is contagious, but there is little beneath her charming façade. Newcomer Jeff Wahlberg offers very little in the role as Diego. He is morose when he reconnects with Dora in high school, and nothing changes even as their mundane routine turns into a global adventure. The best part of the film is Michael Peña (“Ant-Man,” “Crash”) as Dora’s brilliant but nerdy father. He appears in very few scenes but steals each of them.

“Dora and the Lost City of Gold” tries to teach constructive messages like positivity, teamwork and the importance of family. Unfortunately, the film fails to execute on these messages. Dora is truly kind—a Fruit of the Spirit (Galatians 5:22), but her positive attitude is mocked and challenges no one. Teamwork (Ecclesiastes 4:9-10) is suggested, but it is diminished to holding hands and jumping simultaneously. Family is lauded but undermined by parents separating in the name of exploration.

At one point, Dora explains—she never felt alone by herself in the jungle, but feels alone among hundreds of kids at school. This is a powerful statement that will ring true for many young people today. I wish the film further explored topics like this and took seriously the challenges that young people face on a daily basis. Feeling alone can be frightening, but God tells us, “So do not fear, for I am with you…” (Isaiah 41:10). Again, the film introduces this powerful topic, but nothing materializes.

The film certainly leans toward positivity, but there are some elements that may be inappropriate for young audience members. There is mild language—“Oh my G*d,” “stupid,” “freaking,” etc. A man’s bare chest is shown, and an animated character takes his clothes off and shows his behind. Characters discuss “mating” in both the animal world and human world. The biggest concern in this movie is that it may be frightening to young children. An eerie witch doctor is introduced who performs magic. Kids are kidnapped during a field trip. Characters almost die multiple times: drowning, quick sand, booby traps, and falling into a fiery pit. Once again, teenagers may be fine with these elements, but it doesn’t seem geared towards them.

“Dora and the Lost City of Gold” could have succeeded. It could have been a silly adventure for my 4-year-old, or it could have been a personal journey of growing up for my 13-year-old… but it couldn’t decide. As a result, it’s an hour and a half of incongruent scenes with no rhyme or reason. By the way, I don’t think I’m being a curmudgeon. My screening was well attended by families, and no one reacted to anything—no laughs, no screams, no reactions whatsoever… it was like a whole bunch of emotionless Diegos.

By the way, there was no Baby Jaguar, but I did see a brief cameo by the Troll that lives under the bridge.

Comments below:
Positive
Positive—One of the best non-Disney movies I’ve ever seen! I’ve never really watched the original cartoon, but when I saw the preview for this movie, I knew I had to see it. I took my two boys, 11 and 14, who reluctantly went to see this with me. They both enjoyed it, as well. It was great for all ages!!
My Ratings: Moral rating: Good / Moviemaking quality: 4½

Chrystal, age 42 (USA)
Positive—The film was very enjoyable. There were some minor boring spots that did not last for long. There were some moments where “magic” was seen; i.e., one scene where an old woman transformed into a young one and where Dora’s monkey gave her some advice. I did not see any sex, cussing, etc. The film focused on honoring your parents and friends.
My Ratings: Moral rating: Better than Average / Moviemaking quality: 4

David, age 72 (USA)
Negative
Negative—OK—my children didn’t watch Dora—we spent a lot of time overseas. Thought the live-action movie would be humorous—and it did have moments (normally with Michael Pena)—but altogether, lost any good vibes about the movie when it went from an explorer and family/friends movie to one with spirits and witchcraft/magic.

The good—I did not mind Dora’s upbeat outlook in spite of anything else going on. Her entrance to high school reminded me of “Crocodile Dundee” with the “fish out of water” story line. The overall focus on family and her upbeat attitude was fresh and fun to watch.

I agree entirely with the reviewer’s comments about Dora “… never felt alone by herself in the jungle, but feels alone among hundreds of kids in school.” It was not a deep plot point, but I would hazard to guess that this is a similar thought to many, many school students today.

There was the expected story lines with peril—after all, this seemed like a kids” version of an Indiana Jones movie, once they got back into the jungle to search for the parents.

I think where I am concerned is the turn to magic later in the movie. There is a character (could have been a witch doctor) who did perform magic, and there was a scene where the cute monkey suddenly spoke to Dora wise words (a spirit guide/familiar spirit).

I can’t comment on how children who watched the TV show would react to the movie—but I know I have to strongly recommend a “pass” due to the magic in the movie.

—Deuteronomy 18:11-12 is pretty clear—“… or a charmer or a medium or a necromancer or one who inquires of the dead, for whoever does these things is an abomination to the Lord.”
My Ratings: Moral rating: Very Offensive / Moviemaking quality: 3

Casey S., age 54 (USA)
Negative—Here is one hour and 42 minutes I would like back. Am I the only one growing weary of attempts at humor regarding flatulence in movies? To top it off Dora, though well portrayed by Isabela Moner, has a happy song for everything including… dare I say it—defecating in the woods. I am not familiar with the cartoon series, so maybe I could not appreciate it more. I only rented it because it received such great reviews. I don’t know why. Because of the offensive content mentioned and some scenes that may be scary to children, I do not think it is appropriate even for its target audience. If I had a child that was a fan of the cartoon, I would think twice before letting them see it.

The only positive aspect was how Dora was eventually accepted as a friend by some of her classmates and the closing song was great! So if you rent it, skip to the ending.
My Ratings: Moral rating: Average / Moviemaking quality: 2