for pervasive strong language, violence, some sexual content and brief drug use. 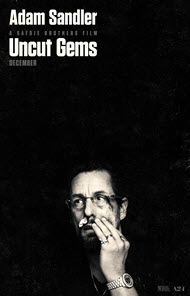 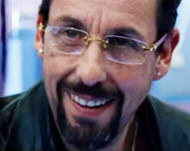 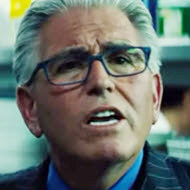 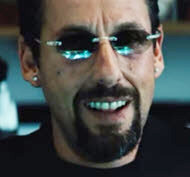 Jewelry store owner and dealer to the rich and famous

GAMBLING—Should Christians be involved with lotteries or other forms of gambling? Answer 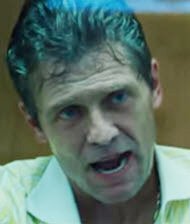 Man having a mistress while married

The rare Ethiopian opal at the center of “Uncut Gems” is rough and coarse. At first glimpse, it’s just a rock, but as you look closer, light refracts—revealing its translucent depth and vast colors. It acts as a macguffin—an object to further the plot—but it also establishes the aesthetic of the journey the viewer is about to experience. “Uncut Gems” is set in 2012, but it could easily be late 1970’s Manhattan… with grainy film, techno music, and neon lights. The question is: is it worth chiseling through the dirt and grime to reach the gem within?

Howard Ratner (Adam Sandler) is a jeweler in the fast-paced diamond district of New York City. He shifts from phone call to phone call as the door of his small jewelry shop buzzes at the arrival of each new customer. While he tries to balance his business with his family, he also tries to conceal the carnality controlling his daily life… from gambling, to theft, and even an extramarital affair. Howard is constantly trying to stay one step ahead of the corruption that dictates his life. This is when he receives a very special delivery—a rare opal from Ethiopia estimated to be worth over one million dollars. This is going to be his “big win.” Against his better judgment, he loans the opal to Boston Celtics’ superstar Kevin Garnett for good luck during the 2012 NBA playoffs. This decision has a ripple effect that spirals Howard down a dangerous series of circumstances. In a whirlwind, Howard tries to avoid thugs, repay his creditors, and protect his family from his countless misjudgments.

“Uncut Gems” is written and directed by brothers Benny and Josh Safdie. It is not a true story, but it is based on a variety of stories that were told to them by their father from his days as a Manhattan jeweler. The narrative has an authenticity that bares a striking resemblance to their 2017 film “Good Time.” In both films, they masterfully capture city life—the lights, the characters, and the language. They transport the audience to a seedy underbelly that somehow feels both unbelievable and completely genuine. The dialog is very fast-paced with characters talking over one another—creating an intense and overwhelming feeling that almost reaches incoherent levels.

With the authenticity, “Uncut Gems” strongly earns its R-rating. Along with plenty of violence, foul language is gratuitous—from countless uses of the f-word, the n-word, s**t, and multiple racial slurs. The Lord’s Name is used in vain frequently. There is a pornographic painting in an apartment building. There is a sexting scene that includes a woman in lingerie and explicit sex-talk. There is also drug and alcohol use.

This is the life of debauchery that Howard Ratner lives, but it doesn’t feel victorious. It feels filthy… in an appropriate way. In essence, the whole film feels like an accurate portrayal of how sin destroys lives. Clearly, Howard has destroyed his relationship with his wife and his daughter… and he is one wrong decision from losing his two sons as well. Everything is falling apart. In the Psalms, King David often lamented about his sin.

“My life is consumed by anguish and my years by groaning; my strength fails because of my affliction, and my bones grow weak.” —Psalm 31:10

Howard’s sins will find him out. Every time his phone rings, it’s frightening. Each time, the door buzzes, it’s unnerving. When he sits in an auditorium, he looks around to ensure no one is there to do harm to him or his family. He cannot find rest, because he is consumed by anguish… just like King David. In spite of this downward spiral, Howard continues to try to overcome his own foolishness, but even when he “wins”… he manages to lose. There seems to be no escape from this hole he has dug for himself. At one point, a character asks Howard about the opal, “How much did you pay for this?” Yes, he paid a dollar amount, but in reality, he paid so much more than that.

“Uncut Gems” is a quality production with a positive message at its core. There has been substantial awards-talk regarding Adam Sandler’s (“The Wedding Singer,” “Punch-Drunk Love”) performance as this out-of-control jeweler. Though he certainly gives a solid performance… I, personally, just couldn’t get past his Adam Sandler-ness. I was more impressed with the performances of Idina Menzel (“Enchanted,” “Frozen”) and newcomer Julia Fox who played his wife and mistress respectively. The film builds tension, develops characters, moves at a breakneck pace, and tries to send a good message. That’s the gem within this vulgar and profane film, but few people will want to dig through the filth to reach that conclusion.

Comments from non-viewers
Negative—I am a non-viewer, but according to Wikipedia, this is now the 7th most profane movie of all time, containing 408 uses of the F-word. I don’t mind profanity, and from time to time I'll watch a movie like Goodfellas or The Departed which has constant cursing, but to go further is just ridiculous. If you put that much language through your ears and in your brain, that will be stuck with you with little space for The Holy Spirit to move through you. Trust me, I had that struggle after seeing “The Wolf of Wall Street.” Read Philippians 4:8 or listen to the song “Oh Be Careful Little Eyes What You See” for more on this. I'm not against R-Rated movies, but I advise hearing the F-word in a movie like there’s only 10 other words in the English language!
My Ratings: Moral rating: Extremely Offensive / Moviemaking quality: no opinion